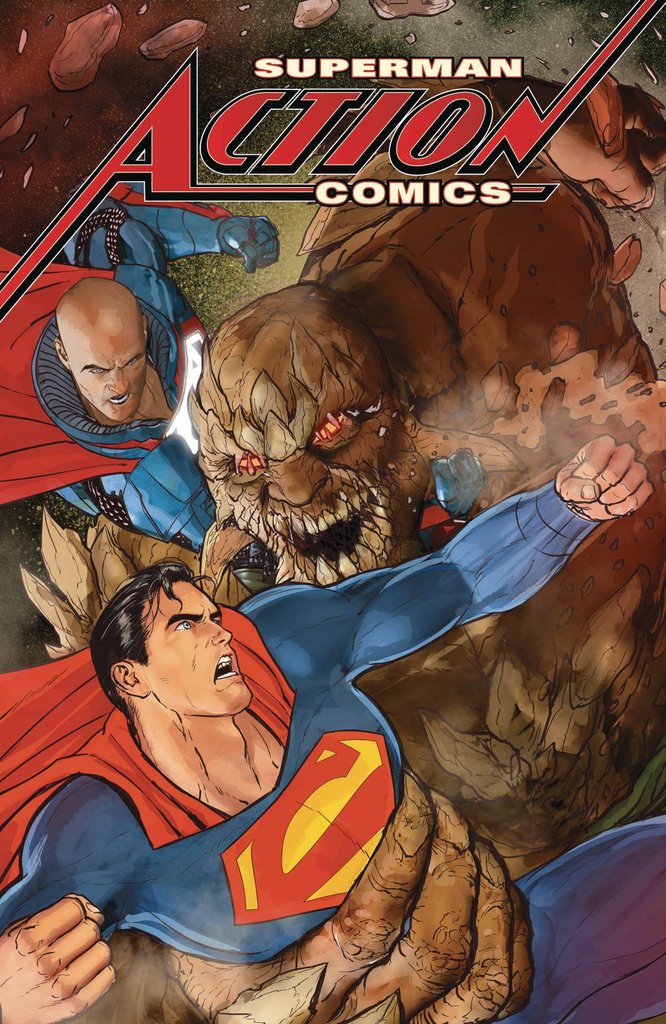 This review of Action Comics #958 does contain spoilers so proceed with caution!

I’m not even a Superman guy but the last issue of Action captivated me. Can they keep it up?

Just like the previous installment in this arc, there’s plenty of action to be had–more, actually, but we still get treated to a good dose of character development. We gain greater insight into the family dynamic of Superman, Lois and their son Jon as wife/mother and son watch the battle between Doomsday, Superman and Lex Luthor live on TV.

Whereas New 52 sought to rewrite the history of the DC Universe, history is playing a huge role in this arc. Superman specifically does not trust Luthor in his new self-appointed role as successor to the New 52 Superman, because he remembers all his arch-rival’s dastardly deeds of yore. Doomsday evokes harsh memories for both Superman and Lois, with the latter trying to hide the truth from their son. And because this is technically a different Doomsday, this throws off Superman somewhat during their fight.

And what a fight it is!

The tone of this arc has been perfect so far, and the high-flying, super-powered battle in and above Metropolis between these three individuals remains top-notch. We see Superman as he is meant to be — saving innocents no matter the potential cost. Even Lex Luthor risks life and limb on a couple of occasions, saving some civilians and even bailing out Superman on one occasion. This creates even more shades of gray regarding Luthor’s true intent.

Longtime Superman fans who may have grown disillusioned with the comics from recent years will not be disappointed with this arc. You can tell that both the writer, Dan Jurgens, and artist Patrick Zircher have a deep appreciation for the characters.

This arc comes highly recommended by yours truly and I’ll be awaiting the next installment with bated breath.