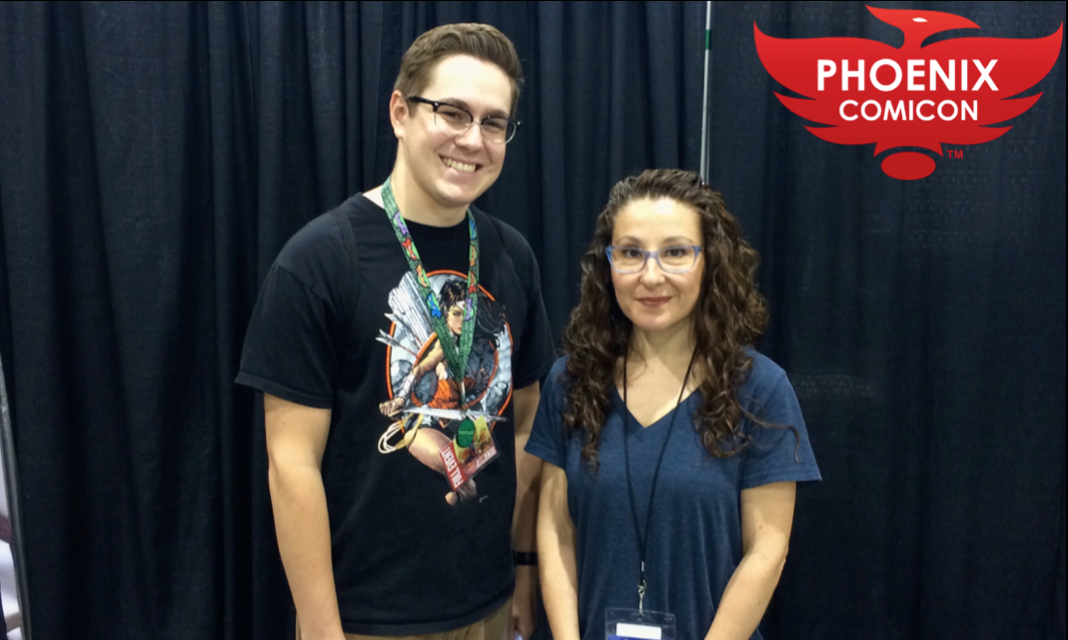 One of these guests was Beth Sotelo, a colorist, artist, and creator of her own comic, Grump. She’s worked for some of the best in the industry, including Marvel, DC, Aspen Comics, and Top Cow Productions. You can keep up with her work on her website: bethsotelo.com or follow her on Twitter @Midimew.

Despite her incredibly busy weekend at the con, Beth Sotelo took the time to talk to me for a few minutes about her life, her work, and her own creation, Grump.

To start everything off, I wanted to familiarize myself with the world of a colorist who is working in the industry; I asked:

So what does it take to be a colorist?

Without any hesitation Beth replied, “Well, I started off at Top Cow in 2001, and my path to getting into coloring was actually working in their production department and like peeking over the shoulders of all the professional colorists that were there at the time.”

Of course, she ended up doing more than just peeking and went on to describe her experience working with some of the professional colorists, such as Peter Steigerwald, “I just tried my best to follow their example. I did some flats for them first, which is a good way to help… to [give colorists experience] is to do flatting for professional colorists.”

Thankfully, Beth must have seen the look of either confusion or unfamiliarity on my face, and she went on to explain what flatting is. “And that’s basically them cutting out the basic shapes in a page, like making the skin tone all a flat skin color. So that helps the colorists get through a page quicker, and it kind of gives those flatters a foot in the door.”

At this point in our interview, an Amber Alert went off on my phone and almost every phone in the convention center created an ambient harmony between the thousands of guests in the Exhibition Hall. Despite our concern, we continued.

So after looking over those shoulders, you saw some great art and that made you want to be a colorist. Just that alone or was there a specific comic?

Excited to share, Beth immediately answered, “No, no, I got in there because I wanted to be an artist, and I did follow Danger Girl and Fathom. They were the things that I really liked. I knew about… Well, I think my very first familiarity with comics was Lobo [laughs]. So he’s pretty cool, but it didn’t draw me… the art didn’t draw me in as an artist. It wasn’t until I saw Danger Girl and Fathom that kind of caught my eye and made me try to hone my artistic skills in the comic vein.”

Nice! And then you went on to obviously be a colorist in the industry, and you did some colorful work [bad joke, I know] on the New X-Men and Wolverine: Killing Made Simple. Those characters are naturally pretty colorful, so what was it like to be a colorist on the X-Men?

“So, the characters are so established, the colors their supposed to be, and the environment that they’re usually set in; it’s pretty much for me to ruin. Everybody has already set an example of how to do it the right way, and I just tried to follow the examples of people who have inspired me over the years and tried to do the best I can. It’s the ones, the creator-owned comics or the Indie comics, that aren’t set in stone, which you have a little more freedom of that kind [to] provide a different kind of challenge – because you have to pick… you have more decisions to make. They both present their challenges in different ways. But I think it’s always fun to work on the super-popular characters cause then people bring the books around, and you get to sign them.”

At this point, Beth and I went off on a tangent about the color orange and our shared love for it, which was brought on by discussing the cover of Wolverine: Killing Made Simple #1.

Soon enough, we got back to the interview for a switch in universes.

You also did some work on the Brightest Day for DC. What was that like? Because they’re also very colorful characters.

“Well, besides the coloring aspect, it was really an issue of the amount of characters on each page and the deadline. So, they took… I had to adjust my mental timetable because there was like sixteen or twenty characters on some double page spreads, and it took me like a couple days to get through one page sometimes because there’s just all these little guys and I want to get ‘em right, and some of ‘em are a little more of an obscure character and they’re probably like a centimeter high. I’m like ‘Who is that guy!? He has very specific details, so I know this is important.’ So, in that regard it was a pretty, pretty monumental task.”

I then switched to her creation, seeing as how recounting the coloring of dozens of superheroes might exhaust her before exhausting my questions.

Now you’ve moved on to doing your own book, which is Grump. What can you tell us about that? When can we expect to see it?

“Grump is my beloved creator-owned comic that I have been working on for a really long time,” she replied with a giggle, excited to share all about it. “I was fortunate enough to have it backed on Kickstarter. Its over shot its timetable, like so many of the projects do, but I’m really, really hoping to get it done this year. I picked up more digital coloring work to kind of filter in between finishing the book. So I wrote it; I penciled it. Josh, from Aspen Comics, has finished the lettering, so I have about two-thirds of the coloring left to finish. And it’ll be done, hopefully not too much longer. But yeah, Its been a really good experience overall, and I think when I first started the Kickstarter, I was kind of like a colorist (saying) ‘Hey, I got this little thing I want to do.’ So when I started drawing it, as the pages progressed, I started kind of expecting a little more from myself artistically, and the layouts took a little longer because I started picking more dramatic angles and I started putting more detail, more background, more perspective. So like all those things kind of extended the deadline beyond the time I allotted myself.”

So you got in your head and worried ‘this could better’ and ‘so could this’?

“Yeah! You know what, a lot of pages are, and I can see the growth as an artist when I look through the book. But it is taking a long time. I really want to get it done for everybody, so they can see like what they were so gracious with their money to back.”

You’re working hard on it and you’re doing your best; you’re doing it over and over until you get it to be perfect, so it should be great!

“I’m looking forward to it,” she replied with a smile.

So I have one more question: if the ‘you’ right now could go back in time to the ‘you’ who just said ‘I want to be involved in comics,’ what advice would you give yourself?

She took a few seconds to ponder, possibly considering the weight of irresponsible time travel, before answering with, “Um… I would… I don’t know. I don’t know if I would tell myself like the grittiness of the deadlines. I’d probably just say ‘Yeah, no, just keep going!’ Because I was in my twenties when I started, and it was a lot easier to like do the seventy-two hour deadline kind of thing, you know? Get a little sleep, and then at the end of it, you sleep for like eighteen hours and laugh about it. So I would just… I would just say, ‘Keep doing what you’re doing. Maybe move a little faster, you know? Maybe get into drawing a little more quickly. Don’t be so worried about taking the safe route of coloring before you jump into the drawing part.’ That’s probably the thing I would say.”

In the end, I found myself enlightened after taking a glimpse into the world of someone who is more than just colorist. Beth Sotelo is a creator – inspired by those around her – who cannot wait for us to see her work in Grump, which has been both the bane and the inevitable triumph of her artistic career.

Be sure to catch Grump when it arrives, as well as the rest of my interviews from Phoenix Comicon being published later this week and the next! 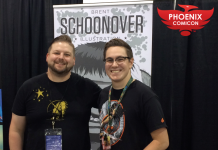 From Retro to the Future: An Interview with Brent Schoonover 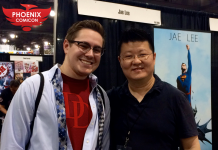 Nothing Overlooked: An Interview with Jae Lee