Fellow detectives, our Batman #21 and The Flash #21 review is a little SPOILER-Y, so … check back with us after you’ve read the issues. Oh? Still here? Thank you!

Since DC Comics relaunched its titles under the Rebirth one-shot in late May of 2016, there were a few particular aspects from a legendary graphic novel recognized by comic fans great and small:

Second, a small lapel pin rendered as a smiley face accented with a blood streak.

And third, dialogue from the last pages of Watchmen, between Ozymandias and Doctor Manhattan, which closes Rebirth #1.

DC’s Chief Creative Officer, Geoff Johns, promised readers that the world of Alan Moore’s opus, Watchmen, would be a major presence in the Rebirth era. Since then, fans and readers have been waiting as patiently as possible for any inkling of, or any reference to, Watchmen.

After appearances by a mysterious character named Mr. Oz (Ozymandias!? The Source‘s own Ethan Supovitz explores the possibilities here), introduced in the Superman story arc, “The Men of Tomorrow,” as well as Wally West’s hearing the word “Manhattan” in Titans #6, comic fans got excited when it was announced that Batman #21 would kick off the story arc entitled “The Button,” showing a lenticular cover of Batman and The Flash holding the famous smiley-face button with the blood streak. So, here we go!

The story opens up in Arkham Asylum, showing a recently-admitted blonde female inmate who is yet to be named but was featured in Rebirth #1. From the dialogue, she appears to be Saturn Girl, a member of the Legion of Superheroes due to her possession of a Legion Flight Ring; the Legion has not been seen since New 52 ended.

The scene quickly switches from Saturn Girl’s seemingly crazy rant to Batman in the Batcave, contemplating the smiley face button. Batman soon finds himself facing one of my favorite all-time villains, The Reverse-Flash. And not the lame New 52 version of the Reverse-Flash, but the actual Eobard Thawne!

I wish more titles would do this kind of thing: have infamous villains from another hero’s turf cross over to be the story arc’s main villain. Like Watchmen, time becomes an important factor, with writer Tom King using it in a clever way, almost as if time is a separate character itself. 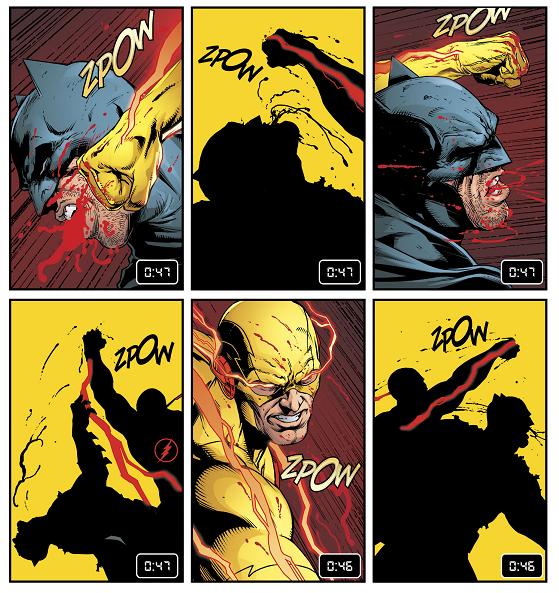 In an Easter egg-style reference, King and artist Jason Fabok use the colors of the bloody smiley face button – yellow, black, and red – to showcase the grand fight between Bats and Reverse Flash. The ending, though, is the cherry on top of this story! Since the Rebirth launch, this is easily my favorite Batman story written by King, and Fabok’s art is, per usual, solidly wonderful all the way through. The issue is a good introduction but a bit of a tease. I only hope more is revealed with the next issues, before the story arc ends. 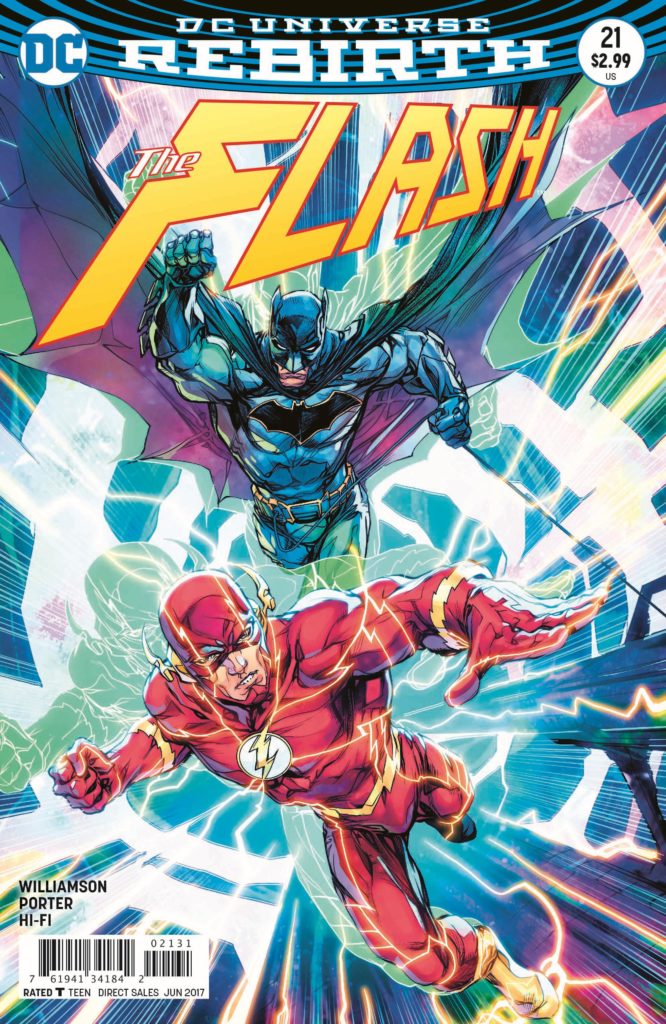 Like Batman #21, this issue of The Flash opens with an older superhero, also featured in Rebirth #1; this time it’s Johnny Thunder, a member of the Justice Society of America (JSA), who is now ninety-years-old and, like Saturn Girl, seemingly insane. Thunder is trying to escape an old folks home and find his teammates from the JSA, also missing since the kick-off of Rebirth.

The story then cuts to Flash investigating the aftermath of Batman #21. Bruce and Barry further discuss the button as well as the Flashpoint image Bruce saw before Reverse Flash showed up. Barry believes he can trace the origin of the button by using the cosmic treadmill, which will help him travel in time to find its source.

This time, the writing is done by Joshua Williamson and art is provided by Howard Porter. I think Williamson has done some interesting stuff with Flash since his Rebirth debut, and Porter’s art is good but doesn’t come close to Fabok. Like Batman #21, this issue ends with the right amount of titillation to keep fans chomping at the bit for more.

It’s a good thing DC had a new issue coming out every week! Unfortunately, according to our friends at Newsarama.com, The Flash #22 has been pushed back a week to May 17; not a big change, but it will be completely worth it if the story delivers what fans have been waiting oh-so-long to see. In the same article from Newsarama.com, it’s been reported Williamson has been brought in to take over writing duties on Batman #22, a move King thinks worked out for the best when it came to the overall story.

What’s better is when this story arc ends, DC will be kicking off another long-awaited storyline to be released each week: “The Lazarus Contract,” featuring the Titans, Teen Titans and Deathstroke.

These two issues of “The Button” are great, however, if I had to pick one over the other, Batman wins. Nevertheless, they both deliver plenty of the wonderful mystery DC promised us from Rebirth #1; that glorious connection to Watchmen.

What I ultimately want from this is not a mere wham-bam fight fest, but I do hope we see at least one of the (in)famous characters from Watchmen, as well as the kind of development the 1986 classic is known for, before the end of The Flash #22.

Well, did I miss something? Another homage to Watchmen? What did you think of the issues? Let us know in the comments below!