Check out our review [WITH SPOILERS] of Batman: White Knight #2.

After regaining his sanity as well as getting out of prison, the Joker tries to make good on his promise to save Gotham! The first step is getting Harley Quinn back on his side, but will she even recognize the new and improved Joker?

Batman — as well as the rest of the city — waits to see what the Joker’s going to do next. Just how far is he willing to go to save Gotham from the Dark Knight?

Joker continues his path of sanity while mitigating his old madness with pills.

He’s released from prison after delivering a powerful speech describing what made him a “super criminal” — he claimed the corrupt systems in Gotham made him that way! Joker also stated that Arkham Asylum was made to discard people rather than cure them.

Murphy ups the ante on the social commentary this issue by adding the angle of the 99% versus the 1%. Joker is starting to become a hero to the middle class, relating to them through the abuse that made him become a villain. This and the reckless methods employed by Batman make it easy for the reader to see why they would rally behind him.

In superhero comics, we often see the common citizens as perpetual victims. But here, Murphy makes them a central part of Joker’s crusade to save Gotham! So, I can see the average bystander having more of a role here in Joker’s war against Batman and corruption.

We also get to see the other side of this equation when Bruce Wayne goes to a party. Sure, most of Gotham’s wealthy are played off as snobby, one-note characters, but it does raise the following question:

Why would the rich live in Gotham considering it’s a crime-ridden cesspool of deeply rooted corruption??

Because they can make money off Gotham’s suffering!

It’s a little cheesy, but it does show that the elite in Gotham can be as bad as the supervillains. This scene also shows Bruce Wayne knocking the hell out of two nefarious elites — it demonstrates that Batman isn’t an absolute villain in this series.

Then there’s the series’ approach to Harley Quinn which was a little confusing, but very interesting. Apparently, there were two Harleys the whole time — the “original” (dressed in her classic suit) saved Joker from the other one (dressed more like she was in Suicide Squad)! 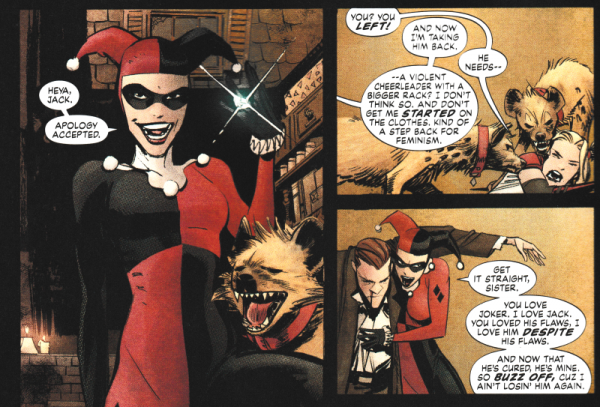 There’s a great scene afterwards when Harley recaps her origin, including what originally drove her away — Joker’s old obsession with Batman and then his attack on Jason Todd. Harley even goes so far as to compare Joker’s Batman obsession with “being in love.” There’s always a fine line between love and hate, after all.

As for Jason Todd, Murphy leaves his fate more ambiguous, possibly implying that we’ll see him in later issues.

Later, the Joker initiates his master plan to defeat Batman. Tracking down every single supervillain, he spikes their drinks with a combo of Mad Hatter tech and Clayface dust. Presumably, this process has them all under the Joker’s control, so question the is this: what will he have them do?

Normally, he’d have them attack Batman, but with Joker walking the “good” path I don’t think that’s it. My theory is this: since he says his strategy is to turn the city against him, he’ll instantly rehabilitate them all! Such an accomplishment would show him capable of succeeding where Batman failed. Either way, Joker just took them off the board in one fell swoop!

Overall, Batman: White Knight #2 is a strong continuation of the series. There’s more social commentary, interesting new developments, and a few winks and nods to a few different Batman mediums! Murphy continues to impress with the ingredients that made a worthy debut, and unique, winding plots promising bigger thrills. Will Joker be the hero Gotham deserves? We’ll just have to wait and see!