Home COMICS Best of the JLA Review: The OMAC Project 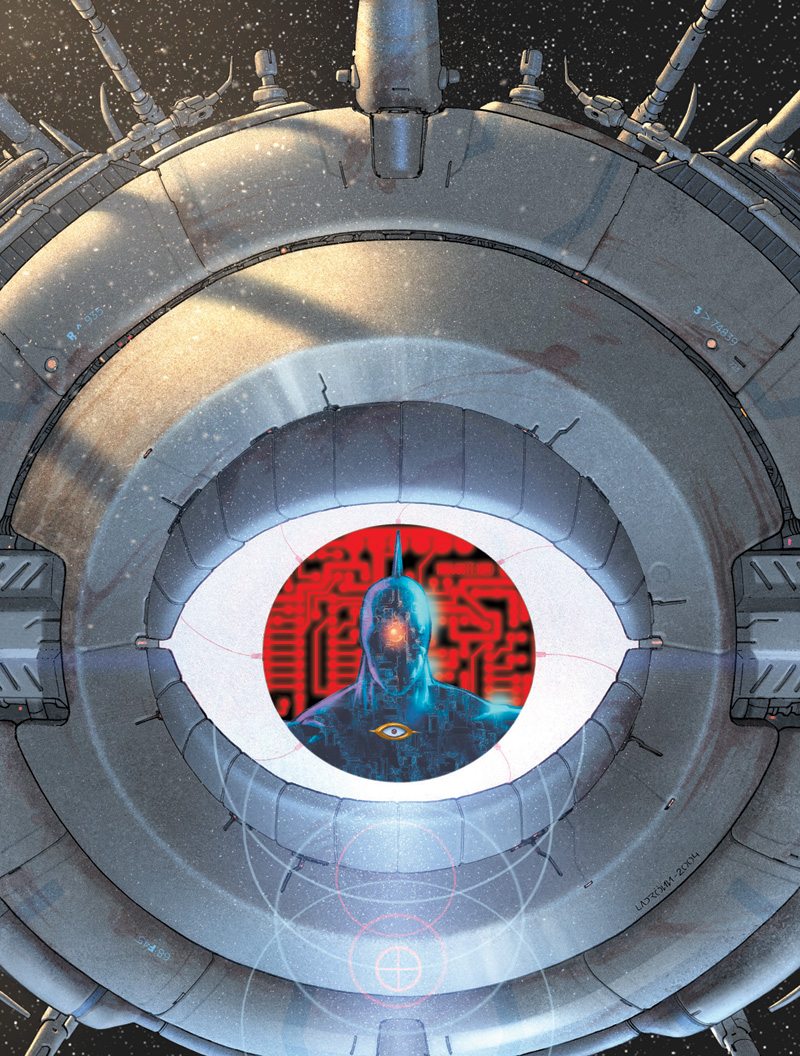 “Do you understand? They broke the promise. If they couldn’t be trusted, then by extension, none of us could. It didn’t matter who was responsible for what had happened. What mattered was that it had happened to begin with. And I was damned if I was going to let it ever happen again.” – Batman, The OMAC Project.

If there’s one thing that I’ve learned from being a fan of the Caped Crusader all these years, it’s that Batman has a plan for everything—and I mean everything. He even had a contingency plan for his own brain when he “installed” a backup of his mind in Batman R.I.P., so building a super-satellite looming above us to monitor every single meta on Earth really isn’t a stretch, right?

Yep. No big deal. Just another day in the life of the most paranoid superhero in the world.

Batman’s obsession to know everything is actually the precursor that led to The OMAC Project in 2005, when Greg Rucka penned a story that rubbed Batman’s insane paranoia right in his face. Still, the series was nothing short of awesome as it shook the very foundations of what it meant to be a hero in the Justice League, and its repercussions set the events of Infinite Crisis in motion. More importantly, it showed readers just how vulnerable and flawed even the mightiest of heroes could be, and when push comes to shove, there will always be tough decisions that they will not be proud of. Such is the hero’s life.

As if that weren’t enough, The OMAC Project has one of the saddest beginnings in comic book history—the quick and sudden death of the Blue Beetle. Ted Kord’s sacrifice comes as quite a shock, and that simple panel of his brains getting blown out is something that, to this day, I still find absolutely horrific. Once again, we find ourselves in a story where it’s not the big guns of the League that are the most heroic—on the contrary, the Big Three are the ones who make the biggest mistakes that everyone else has to clean up.

Case in point: Batman, because of the whole mind-wipe fiasco back in Identity Crisis (check it out to know more because you will miss half of your life if you don’t), is the one responsible for creating the Brother Mk I Satellite in the first place, the sort-of Overmind that becomes corrupted by the malevolent Maxwell Lord in order to keep tabs on all of the superheroes’ identities and weaknesses. Then, Superman gets mind-controlled by Maxwell Lord and turned into an evil pawn, until finally, Wonder Woman stops Big Blue by [SPOILER ALERT!] unceremoniously snapping Maxwell’s neck. So, The Trinity making such big slip-ups in just one series? That’s got to be some kind of record.

The satellite, now operating autonomously and calling itself ‘Brother Eye’, commands remote-controlled OMAC units that use nanotechnology to transform ordinary citizens into weapons of mass destruction. The themes may be on a big global scale, but once again, the beauty of the piece is getting to see how the heroes think and react during the direst circumstances.

I particularly liked the way Blue Beetle regarded Supes and Wondy before his sad demise. With Clark, he goes, “It doesn’t matter how many times I’ve met him—it’s always like the first. Your throat gets a little dry; you overthink what you’re going to say. He makes you feel useless and important at the same time.” Then, with the Amazon Princess, he muses, “Here’s the secret about Diana. We all love her. Even Batman. It’s the way she says your name, like she knows you, knows everything about you, the best and the worst. Like she knows you, and she loves you anyway.” Beautiful.

A variety of superstar artists join in to give life to this already gripping story, which includes Rags Morales, Jesus Saiz, Ivan Reis, Phil Jimenez, and Ed Benes. Best of all, at the climax of The OMAC Project, we get to see Diana and Clark go head to head in a ruthless battle, so if you’ve always wondered how Wonder Woman would fare against the Man of Steel, this is it—complete with a face burning, an arm breaking, and two super-ears exploding. What’s Batman V Superman got to say about that?

What’s YOUR favorite Justice League story?? Let us know below!