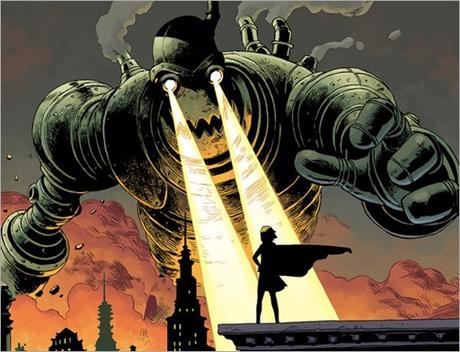 In the first issue of Black Hammer we met a group of heroes who were stranded in a world that wasn’t their own. We saw how their ten year exile has begun to take a toll on their well-being. In Black Hammer #2, Jeff Lemire starts digging deeper and the results are riveting.

The focus of Black Hammer #2 is Golden Gail. Back in the “Golden Age” she was a runaway orphan who was given the ability to transform into a hero simply by speaking the name of the wizard who gave her her powers.

Does that sound familiar? It should.

You see, Gail is actually a woman in her 60s now, but she’s trapped in her depowered superhero form in exile. Everyone sees her as a child. Everyone except her. She knows she’s a grown woman and she expects to be treated as such. As you can imagine this creates issues when she’s caught smoking in the girl’s room or busted for chronic truancy.

I’m a sucker for stories that deconstruct superhero archetypes. So far, Black Hammer is doing a fantastic job of just that, as each exiled hero aligns with one of these archetypes. In addition to Golden Gail, we’ve got a patriotic strongman, a witch, a space explorer, a robot and an alien. I expect the next few issues are going to explore these characters’ back stories while continuing to address the mystery of how they got trapped and how they get home.

Lemire is at the top of his game here. He’s clearly enjoying riffing on characters we know and love while giving them his own unique spin.

Issue 3 promises to explore Barbalien. I’m looking forward to that one.

Black Hammer is a series that is very well worth your time. Give it a look. 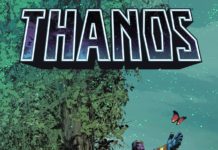