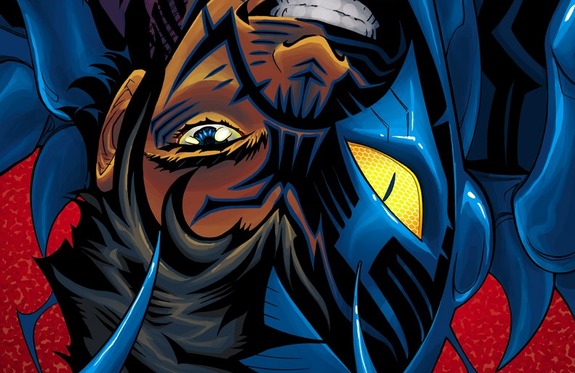 Greetings from the Reach! Check out Our Review [WITH SPOILERS] of Blue Beetle: Rebirth #1!!

Jaime Reyes’s life has been crazy ever since that blue scarab attached itself to his spine! Now, it’s about to get even crazier! Billionaire and brilliant scientist Ted Kord wants to help Jaime reach his full potential as a superhero, whether he likes it or not! Well, love it or hate it, they stand together against evil and aim to discover the secrets of the alien scarab that transforms Jaime into The Blue Beetle!!

The Blue Beetle’s been an underrated character for many years, and to me, that has always been an injustice. From Ted Kord’s JLI days and partnership with Booster Gold, to the amazing Jaime Reyes series that started in 2006 (which if you haven’t read yet, I recommend reading it now. You won’t be disappointed), there are a lot of great stories for Blue Beetle!

The writing done by Keith Giffen (who kicked off that aforementioned run in 2006) is the strongest aspect of Blue Beetle: Rebirth! Much like a lot of the other Rebirth titles, this comic takes out the worst aspects of the New 52. In Blue Beetle’s case, it’s almost as though that last series never even happened. Thankfully, the events of what happened to Jaime during Threshhold are never mentioned once and it’s probably best that it stays that way.

Giffen’s story and characters are incredibly engaging, along with the great dialogue. There aren’t lines that feel forced and these characters interact well with each other; Ted Kord is especially enjoyable to read. Ted has been absent from the main DC Universe for a long time now, so it’s great to see him back in action and alongside Jaime. The two bantering back and forth as the overly excited mentor and reluctant student is really entertaining and gives provides a healthy, consistent serving of one-liners.

The villains are also a real pleasure to read! La Dama finally returns and is as intimidating as ever, adding two crazy new additions to the Beetle’s rogue’s gallery: Rack and Ruin! The seemingly invincible twins are hilariously insane and actually remind me of Ted’s old villains, the Madniks! They’re incredibly interesting, and I hope we learn more about Rack and Ruin later in the series.

All these things make for a perfect comic…well, nearly perfect, anyway. There are only two things that stop this issue from being flawless:

1. The art by Scott Kolins! There are some panels that look good, but most of the time it just feels awkward with weird perspectives and sometimes deadpan expressions!

2. I wasn’t a big fan the revelation at issue’s end; apparently, the scarab is “magical.” It seems like a lot of the Blue Beetle’s history has been going back and forth between science and magic. Now, it just feels like a stretch with everything we saw from the Reach (who I’m pretty sure are still in continuity here)!! But I’d like to see where this goes anyway and who knows, maybe we’ll find out the scarab is a mix of science and magic later on.

Honestly, I had a lot of fun reading Blue Beetle: Rebirth and it made me very excited to see how the rest of this series plays out! Giffen’s fantastic writing mixes the old with the new and gives Blue Beetle the fresh start he really deserves! If you’re a fan of the character, then I highly recommend this comic! With lots of action and fun, what’s not to love?