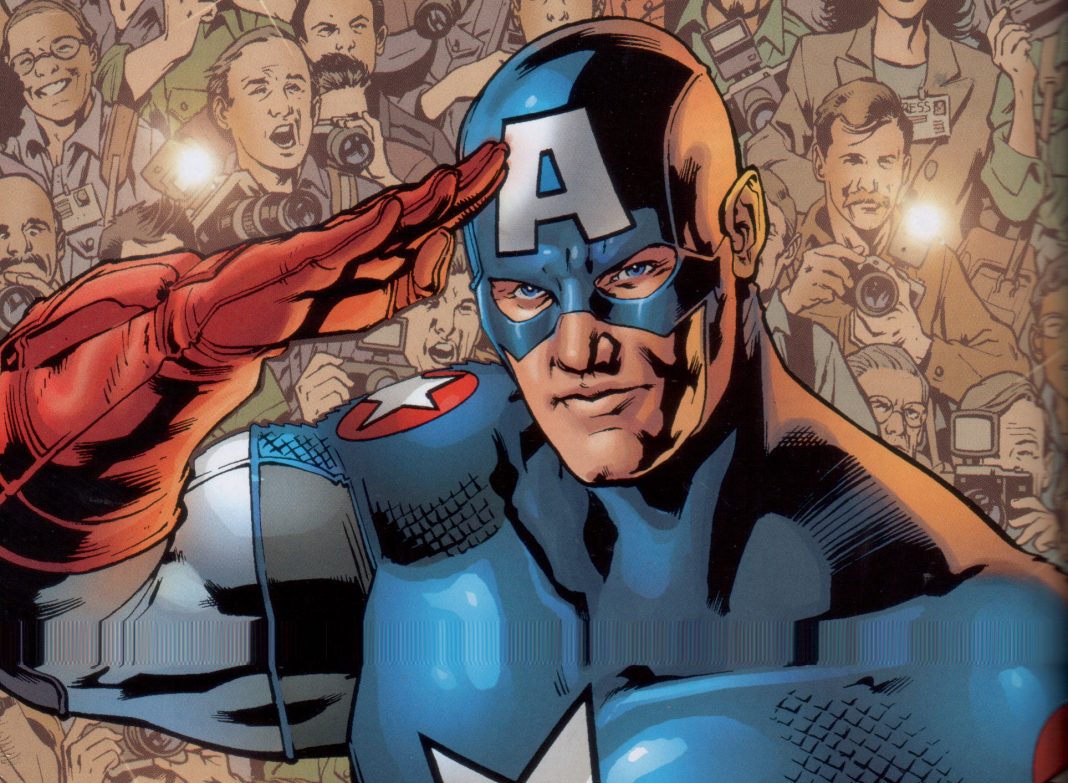 The race for the American presidency has been the root of much dread, irritation, and disagreement over the past year. The population of the present presidential field remains set at 3 major candidates, each a representative of their own radical views. Whether your opinion corresponds with any of them or not, they each stand separated, outliers even in their own parties. This polarizing road to the White House has been repaved yet again with presumably undeliverable promises and more fruitless insults than ever, leaving us to wonder: is there another way? Another candidate? Someone who can unite the country? The answer may be simpler than when first considered. Simply put, in November, as the people of the United States of America – Democrats, Republicans, and Independents alike – we must elect Captain America for President of the United States.

Thankfully, this idea is not novel or revolutionary. Writer Roger Stern, along with the help of Jim Shooter, Roger McKenzie, and Don Perlin, is originally responsible for the idea behind President Rogers. In 1980’s Captain America #250, Cap is persuaded by Sam Underwood, the chairman of the New Populist Party Convention, to run for president. However, he ends up declining to run in a press conference. Despite approval from both Republicans and Democrats, Cap discusses the idea of being the President of the United States with the Avengers, who convince him that it would not be the best path for him as a hero and an individual.

Later on, during the first run of Marvel Comics’ What If series, writer Mike W. Barr expanded upon this idea. While the U.S. was certainly not facing an election this unique, or even presidential election at the time, the comic was still released at a pivotal moment in politics; it was just a few months after Ronald Reagan took office. During his election and presidency, Reagan ushered in a new era of conservatism and ended Democratic Jimmy Carter’s chances for reelection. It is certainly possible that Barr was responding to this change through his writing, expressing his fear of the new regime and a desire for the best president possible; these were feelings that led to Barr asking the same question I ask now: “Wouldn’t it be great to elect Captain America as President?” Thus, What If #26 was born to expand upon the events of Captain America #250, titled “What If Captain America Had Been Elected President?”

The story begins at the press conference from Captain America #250; however, in a split-second snap decision, after hearing the voices of people cheering his name, begging for his leadership, Cap decides to run. The people rejoice in a unanimous uproar of optimism. With their prayers answered, Cap dives into the world of American politics with his very first task: to find a worthy running mate. As the yes-men running Cap’s campaign struggle for an answer and consider every possibility (even movie stars, which could be considered a jab at former President Reagan), Cap makes his own decision to run with the relentless and honorable Senator Andrew Jackson Hawk. Together, Cap believes Senator Hawk will be a partner able to make up for his lack of experience while providing a means to work with Congress. Yet, while the duo dominates in the polls, the haunting presence of a revolution in San Pedro rises in the news, creating a stir of worry in the Cap campaign.

Thankfully, Captain America and Andrew Jackson Hawk win the election by a landslide with 51.7% of the popular vote, 138 electoral votes — the ones that really matter — and 12 states, effectively eliminating the reign of Ronald Reagan. During his inauguration a little while later, Cap reveals his secret identity as a result of one of his campaign promises. How can the people truly trust him without knowing who he is? So Steve unmasks himself and reveals his identity to the world. No more than a few seconds later an assassin strikes, but Cap’s instincts save his life as he dodges the fatal headshot. Unlike any president before him, Cap not only dodges the bullet but runs after the shooter, catching him and turning him in. On the following page, the Watcher informs us of the greatest accomplishment of the Captain America presidency: the creation of a Solar Collecting Station, giving the country clean energy and fulfilling Cap’s promise to rid the nation’s dependence on foreign oil.

However, as the U.S. thrives on solar energy and through the leadership of President America, the revolution in San Pedro grows, needing the support of a larger nation. Feeling burdened by their plight, Cap sends the revolutionaries some of the newly developed solar weapons, allowing them to win the war. Out of respect to the new leader of San Pedro and to keep another ally, Cap decides to visit the country. However, something is amiss, and the new leader of San Pedro reveals himself to be… RED SKULL!

Stunned, Captain America is taken prisoner by the Skull. Shortly after, he awakens to hear Red Skull’s plan to turn the United States’ Solar Collecting Station against them by weaponizing the satellite into a giant solar-powered cannon; he’ll be pointing it right at the land of the free who are probably not feeling very brave. Thankfully, Cap manages to escape (as always), but in his fight to stop the Skull he is killed, sacrificing himself for the country he loves.

In the end, the presidency of Captain America paints an even larger bullseye to be targeted not only by the enemies of the nation but by Cap’s enemies as well. Although his presidency unites the nation, creates a form of sustainable energy, fights global warming, and ends the dependence of foreign and domestic oil, the risk of Captain America serving as president appears to be too great. By putting one of our greatest heroes in office, he can no longer lead the Avengers or fight against the nonstop threats of villains. Therefore, one can only conclude that his presidency would be a gamble. But what candidate is not a gamble? Every time we vote, we take a gamble, putting forth whom we think can serve us best, but we never absolutely know the implications of their time in office.

Considering this, writer Mike Barr’s What If #26 marvelously captures what an election is like and how the implications of the electoral process weigh on the country and the world; all this, but with a typical, Marvel Comics twist. Although the benefits of a Captain America presidency seem to outweigh the possible consequences, we simply do not live in that world; the Marvel Universe is not our own. For better or worse, Captain American and the rest of the Marvel Comics characters do not exist in our reality. Without them, we are left to solve our own problems, including those surrounding the election and our country.

With all of this in mind, the choice is YOURS. This is a democracy after all, right? So remember, even if he is not real…