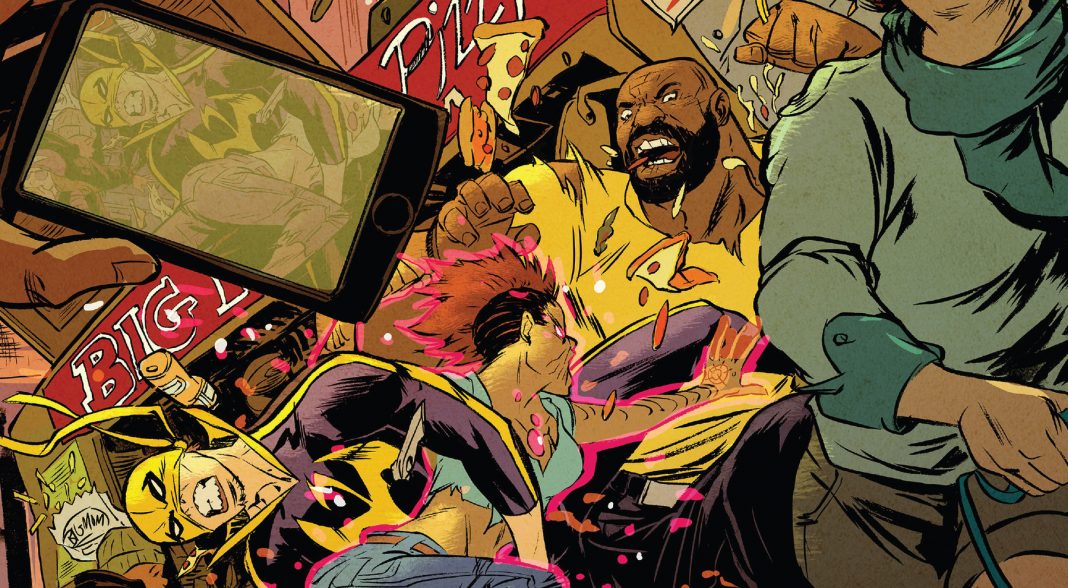 All roads lead to Rome and all trouble leads to Power Man and Iron Fist, at least in their own comic. For the last three months, the duo have been frantically trying to make the world right again by helping their former secretary, Jennie, a recently released convict attempting to obtain a powerful gem known as the Super Soul Stone. This week, followers of this humorous series were treated to the long-awaited, climatic battle for the Super Soul Stone. So, who comes out on top? The smart money says Jessica Jones for not involving herself at all, but bets could be placed on the boys as well. I mean, it is their comic, after all! But is it one you want in your library? Is it worthy enough to join the overcrowded collection you keep stashed away? To alleviate your worries, we picked up the book and read through it a few times to bring you our review of Power Man and Iron Fist #4.

Thankfully, for any readers out there not familiar with Jennie – who quickly became the villain of the present storyline – the issue starts with a short, biographical piece on her life from her work with Power Man and Iron Fist to her friendship in prison with Black Mariah. The reader is quickly whisked away through her tragic backstory, yet left wondering, “Why wasn’t I reminded of this before?” It’s a strange opening. It serves as poetic history leading to her present situation as a Super Soul Stone-powered monster, but it begs the following question: “If her backstory is so important (which it is), why weren’t we given the details earlier?” Of course, the exceptionally well-read Marvelites out there who know EVERY little detail of EVERY Marvel comic EVER are perhaps overly familiar with her character, but for the rest of us – especially those new to comics or to the Heroes for Hire – we could have used this information a little earlier. However, since it works well with the story unfolding over the next few pages, it’s not a bad move that detracts from the comic; it is just placed unusually within the overall storyline.

Back in the present, the irony becomes overwhelmingly hilarious. During the pivotal brawl between the monstrous Jennie and our titular titans, everything the reader has seen in the series beforehand is entirely reversed. As Jennie pounces, growls, yells, and even throws cars, Black Mariah, the self-acknowledged villain, is anxiously trying to talk Jennie down from killing Power Man and Iron Fist. Given Black Mariah’s lengthy, cynical history, no one would have expected to see her trying to do something for a friend or try to stop them from killing the Heroes for Hire! Instead of the sweet, scrawny Jennie talking down the ruthless, Black Mariah, the reader sees the complete opposite, but that’s not all that’s been twisted. With crime boss Lonnie Lincoln still in the crossfire, Luke demands Iron Fist get him to safety, leaving him to fight Jennie alone. The man who did not even want to get the team back together or get involved in any confrontation now demands to be left alone to fight. Surprisingly, this led to a brief, possibly accidentally desire to get the team back together. All of this, a brilliant build-up from the first three issues, has now become a climax of delightful irony.

So is it worth reading? Yes, but only if you are willing to read the “iffy” issues that come before it. In the end, it’s hard not to appreciate the things writer David Walker does well. His bits of humor and use of irony, as stated before, are fantastic, yet his story structure could use a little work. Despite this, Walker is off to a solid start in what is sure to become a good series for both Power Man and Iron Fist.