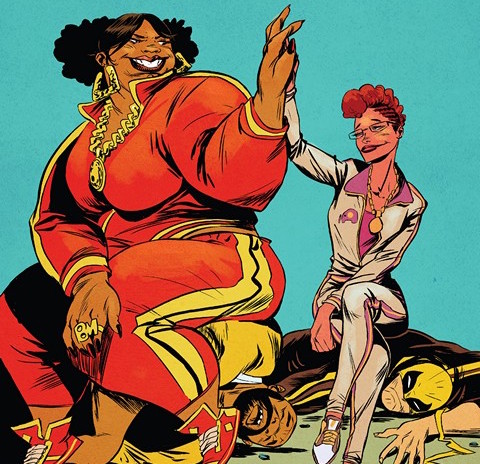 Has it really been a month already? It must have been because this week saw the release of another issue of Marvel’s Power Man and Iron Fist series. Unfortunately, what started out as the anticipated return of the Heroes for Hire – with a lot of kicking a$$ and taking names – has rather rapidly wound down into a series of dull moments, slowly attempting to build into a worthy confrontation. While the third issue does have its own shining scenes and jokes, it is overwhelmingly held down by the slow pace, a forced special guest, and the retelling of the first issue. But to truly understand why, take a look at the rest of our review of Power Man and Iron Fist #3.

Sadly, the finest part of the third comic happens within the first few pages, thanks to the sassy, swearing Jessica Jones, who has had enough of her husband playing hero. Despite being the most muscular man on the page and protected by impenetrable skin, Luke’s strength and general manhood is nowhere near the level of rage Jessica shows by emphatically expressing her sentiment toward the Heroes for Hire reunion. Driven by Luke’s destroyed shirt, a present from Jessica herself, she spends two pages giving Luke’s listening ear and Danny’s distracted ear a piece of her mind.

From there, it’s a roller coaster ride. After obtaining powers from the Super Soul Stone, Jennie starts to give in to its corrupting power, desiring to kill everyone, including both Power Man and Iron Fist. We see a decent character arc as she falls even farther from grace, yet a conversation between the Heroes for Hire and Señor Mágico gives us the greatest insight to the power she possesses. Mágico explains that the Super Soul Stone is an embodiment of street magic, giving power only to the weak and in this case, Jennie.

But before finally learning the secret behind the Super Soul Stone, readers have to sit through one of the most forced and awkward cameos in comics. Brilliantly, the boys go to the Sorcerer Supreme himself, Dr. Strange, but he provides no information on the stone, leaving the reader to wonder why they just read the scene at all. It does not contain any character development or sense of purpose; it simply exists.

Overall, the third issue of Power Man and Iron Fist furthers the plot but just barely; the story still seems to be lurching forward at a half-pace when compared to other Marvel books. Luckily though, artist Sanford Greene appears to have found his niche in the book and seems more comfortable drawing the characters, but it would be criminal not to mention color artist Lee Loughride. His use of color to set the tone of each scene is fantastic and never fails to create separate spaces for each and every moment. In the end, the third comic lends itself to advance the story yet feels slightly stale.