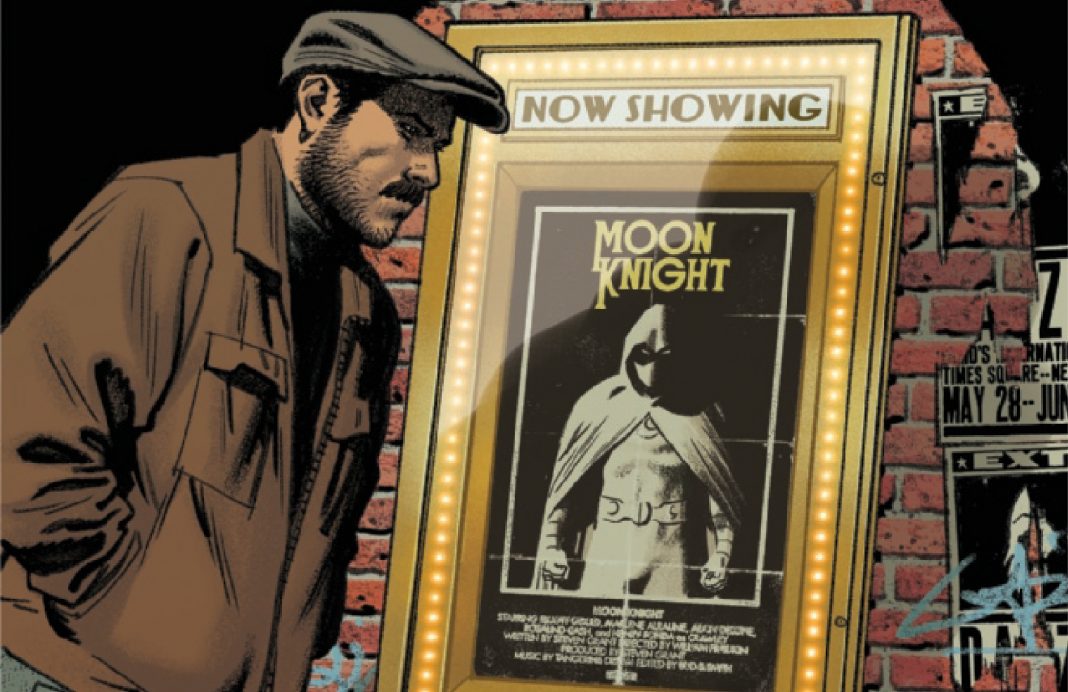 However, for those of you who may have missed #7, which mainly focused on a side story where pilot Marc Spector fought space wolves, you can check out The Source‘s review of it HERE. Fair warning, though; we did not have nice things to say…

This month, on the other hand, The Source has great things to say about the continuation of Jeff Lemire’s journey into Marc Spector’s psyche! Unlike the tangent readers witnessed last month, Lemire went back to tying all the details and side stories together in one compelling narrative. As usual, The Source will present a summary of the events and give you our thoughts about the issue, and where it could be going in our Moon Knight #8 Review.

Moon Knight #8 begins where #7 left us. On the final page of last month’s issue, Jake Lockley had walked into Gena’s Diner to find her and her customers dead. Now, he sits in an interrogation room with two familiar faces, Billy and Bobby, the orderlies from the mental institution. They give him the unconventional bad cop/bad cop routine — clearly because they ran out of bad cops — until Detective Emmet takes control.

Jake reluctantly asks if he knows her from somewhere, but she declines the idea with a simple “No.” However, readers should recognize her as Dr. Emmet, who had been running the mental institution earlier in the series. As Emmet throws accusations of both murder and insanity toward Jake, he becomes distraught.

Just before Jake is about to lose his cool, Steven Grant calls “cut,” changing this dramatic, condensed moment into a scene for Grant’s Moon Knight movie.

After this happens, Grant becomes confused, wondering how he has gone from intense interrogation to relaxed direction. Despite this shock, he once again accepts his role as Steven Grant and calls “action,” continuing the film. Yet after this call, the consciousness returns to Jake Lockley sitting before Detective Emmet in the confined interrogation room, not a movie set. Confused and concerned by a killer being on the loose, Jake fights back, escaping the police station with his Moon Knight costume. To distract himself from these strange shifts between personality and person, Jake decides to embrace the mask, leading him to a familiar face.

Once again, Crawley, the voice of reason within these overlapping realities, reappears, despite selling his soul to Anubis to help Marc earlier in the series.

Moon Knight asks him about this mysterious killer, but Crawley reminds him that he is not really “here,” (wherever here is) and that the earlier events of the series were more than just a dream to be ignored. Before leaving, he gives Moon Knight EXTREMELY specific information on the unknown killer.

As Moon Knight leaps across the city to reach the address given by Crawley, he monologues as any standard hero would. Eventually, he reaches a rooftop, ready to confront the killer, but just before the battle, Steven Grant calls for a cut, taking this reality and placing it in a studio once more. This, of course, alarms Grant, who has switched places again and, for some reason, suddenly remembers being bitten by space-wolves on the moon.

All at once, these three personalities — Jake Lockley as Moon Knight, Steven Grant the producer, and space-wolf fighter Marc Spector — become distressed. Lockley runs for Marlene, Grant runs for help, and Spector runs for a space-wolf antidote, but they each converge, through separate, transcendental doorways, into the unforgotten landscape of New York, covered in sand and lying beneath the shadow of Khonshu’s pyramid. Before them stands the seemingly real Marc Spector, still in his Mr. Knight garb, who thanks each personality coming to him.

While it took some bothersome setup to get here, writer Jeff Lemire ties everything together from his first seven Moon Knight comics into Moon Knight #8, which ends on an epic cliffhanger. As predicted by this writer earlier, it appears the present story-arc takes place within Marc Spector’s mind but on an even deeper level. This was presumably another attempt by Khonshu to break Marc’s psyche and take over his body. And and instead of placing him in another mental institution, Khonshu took more complicated blows at each personality to destroy Marc’s already damaged mental state. However, the ending of this comic seems to go against that idea; Marc is happy to see his personalities, as if he had called them, as if he had driven them to this moment.

Until next month’s ending of the “Incarnations” arc, nothing can be said for sure. In the meantime, readers can theorize. However, above all else, readers can appreciate the astounding art and artistic styles represented in Moon Knight #8, courtesy of Francesco Francavilla, Wilfredo Torres, James Stokoe, Greg Smallwood, Michael Garland, and Jordie Bellaire.

Be sure to check back with The Source next month for our review of Moon Knight #9 along with an abundance of comic book news!