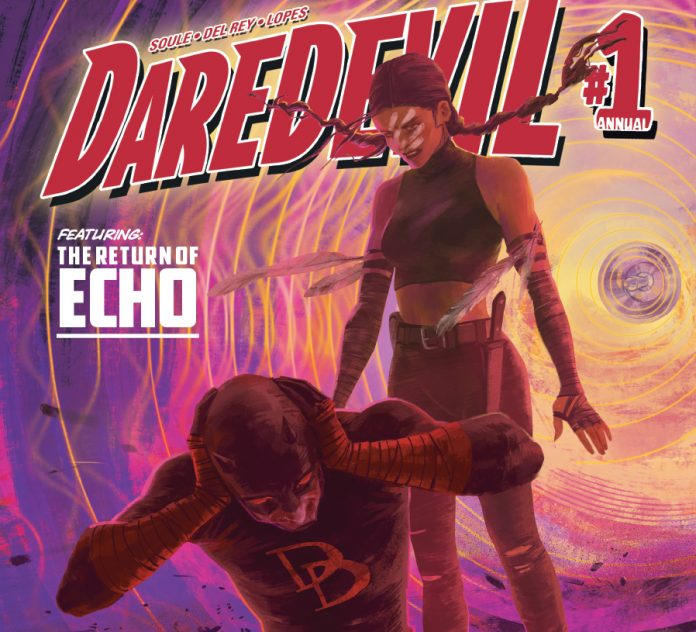 Last week, Marvel Comics began releasing 2016 annual issues with everyone’s favorite horn-headed hero, Daredevil. After facing some immense obstacles in the past few years, from being possessed by the Beast and leading the Hand to moving around the U.S., Daredevil could undoubtedly use a break from it all, which he received in his new annual issue. Despite the alarming and dramatic cover page, featuring a seemingly angry and resurrected Echo, the issue stayed largely away from the drama and played out a more classic, almost campy, comic book storyline. However, the return of Echo is not something to take lightly, and we hope it will play out later in Daredevil’s main series. Additionally, the issue’s bonus story brings Melvin Potter (aka Gladiator) back into the spotlight. But for now, The Source has taken a look at the comic, analyzed it, and is ready to tell you all about it in our lengthy Daredevil Annual Review with a bonus biography on Echo.

Perhaps Daredevil’s most underrated girlfriend, the half Native American and half Latina Maya Lopez (aka Echo) totes a rich backstory, an AMAZING skill, and a disability much like the Devil of Hell’s Kitchen himself.

Introduced in 1999 by David Mack and Joe Quesada, Echo was originally a devil in disguise (excuse the pun). After being born deaf, she was placed in special education as a child but was soon transferred into gifted education after duplicating a song she had seen played on piano.

However, while she was still young, her father, an enforcer for the Kingpin, was killed in front of her under Kingpin’s orders. In his final moments, her father reached out to her and left a bloody handprint across her face. From then on, Maya was taken in by the Kingpin, Wilson Fisk, and given the best education money could buy. However, Fisk attempted to use her in a plot against his adversary, Daredevil, by tricking Maya into thinking that Daredevil killed her father.

In response, Maya created the identity Echo, based off of her ability to copy motion, and watched footage of fights between Daredevil and Bullseye to prepare. With the skills of both talented men, Echo proved to be more than a match for Daredevil, but she stopped after learning his secret identity, Matt Murdock. While Echo had prepared for this showdown, Maya engaged in a wonderfully adorable relationship with Matt. After learning Daredevil’s identity, Matt explained himself and told Maya of Kingpin’s deception. Furious, Maya attacked and brutally beat Kingpin, leaving him temporarily blind, and even left New York to spend time on her father’s reservation.

After these events, Maya joined the New Avengers under the identity Ronin, but only for a short time, agreeing with Captain America to stay in Japan to monitor the Hand. From then on, Echo only appeared in major comic book events, such as Civil War, World War Hulk, and Secret Invasion; despite not appearing frequently, Maya usually ended up playing an almost unnoticed but necessary role in these larger stories. However, her heroic career came to an end in Moon Knight’s fourth solo series. With the help of the hooded hero, the duo found and fought the Kingpin of Los Angeles, Count Nefaria, but Echo was killed in battle. Since that event in 2012’s Moon Knight #9, Echo hasn’t made any other appearance. Until now…

Daredevil Annual #1: “The Return of Echo”

After being missing for nearly four years, Echo is back and at a concert in Hell’s Kitchen for reasons unknown. Despite her inability to hear the music, she assures her friend, Eric, that the lights and vibrations will be enough of a spectacle for her. Unfortunately though, as she enjoys watching the opening pianist, Garland, the crowd becomes unconscious. Before she can come to terms with what has happened, her friend Eric transforms into blue zombie-like creature with a suspicious looking device resembling Klaw’s sonic emitter.

Soon enough, Echo not only realizes that this new plague is related to sound but that Hell’s Kitchen is also home to the most sensitive ears on the planet. As she runs and jumps across rooftops to find Daredevil, she picks up a pair of noise-cancelling headphones. Eventually, the Man Without Fear appears, but Echo forces the headphones over Matt’s ears immediately and starts blasting Prince’s 1982 classic, “1999.”

After the horde of amplified sound zombies passes by, Echo removes the headphones, and the two talk. Daredevil immediately remarks about how quiet the city is, and Echo explains everything that has occurred. In response, Daredevil asks if the creatures have speaker cones on their hands. Maya then confirms, and Daredevil pegs Klaw as the one responsible for this booming bunch of brutes taking over the city.

Together, Daredevil and Echo venture across town to find an army of Klaw’s creatures guarding the Office of Emergency Management, which must be a pretty hectic place in Marvel’s New York. Inside, they barricade themselves away from the klambies (Klaw + zombies) with a soundman on stand-by, ready to broadcast the emergency signal at any time. After explaining the situation, Daredevil proposes using the emergency broadcast system like the noise-canceling headphones to generate an opposite frequency in order to cancel out Klaw’s zombifying sound.

The problem is, the sound guy cannot invert the sound without it playing, which would convert him and Daredevil into Klaw’s sound zombies. To save the day, Echo duplicates the pianist Garland’s song on a keyboard in the office’s studio. While she tries her best to play it correctly, the pressure mounts, and both Daredevil and the sound guy are taken into Klaw’s army. As if by a comic book miracle, right as Klaw is announcing his rule over New York, Echo gets the song right and saves the day.

Sometime later, Echo and Daredevil are standing on a rooftop, giving the readers a throwback to their wonderfully ADORABLE relationship. The two agree that they need to find Garland, the pianist who started it all, but before doing that, Echo has a question. She turns to Daredevil and asks, “The song… the one I played that got rid of Klaw and turned everything back to normal. What did it sound like?” Daredevil smiles and replies, “Honestly? Best damn song I ever heard.”

Just from reading the description of the events here, one can easily deduce that the story was indeed a little campy; however, it was campy in a good way. With all of the drama in Daredevil’s current life and some of the strange events in his current series, it was nice to see the Man Without Fear get back to the basics in a short, simple story.

Yet being advertised as “The Return of Echo” with such a startling cover was entirely misleading. Hopefully, since Charles Soule, the writer of Daredevil’s current series, wrote the annual issue, Echo’s return will play a larger role later on. In the end, the first story in the comic was refreshing but a bit of a letdown, which can also be said about Vanesa R. Del Rey’s art. Some panels in the comic are drawn wonderfully, especially the Klaw creatures, but others leave a lot to be desired.

The Multiple Minds of Melvin Potter

Unfortunately, the second story in the comic, “The Multiple Minds of Melvin Potter/Fragments,” shares the same continuity issues but stands as the more intriguing of the two. Written by Roger McKenzie, the narrative explores the damaged mind inside of Melvin Potter/Gladiator, who spends the issue speaking plurally about himself like Venom used to. In the end, Daredevil takes down the bloodthirsty Gladiator and places him in the Stillman Psychiatric Hospital.

Much like the former storyline, Melvin Potter is a character who has been absent for years. His last appearance was in the shocking murder-mystery, Daredevil: End of Days from 2013. Even worse, Potter’s last appearance as Gladiator was in 2007’s Daredevil #99, but suddenly, without any sort explanation, he is back as Gladiator! Once again, readers can only hope this story will play a part in Soule’s main Daredevil series, but until it does, the entire annual issue seemed misplaced.

Check back with The Source for more reviews of your favorite comics, TV shows, and movies, as well as the latest in comic book news!