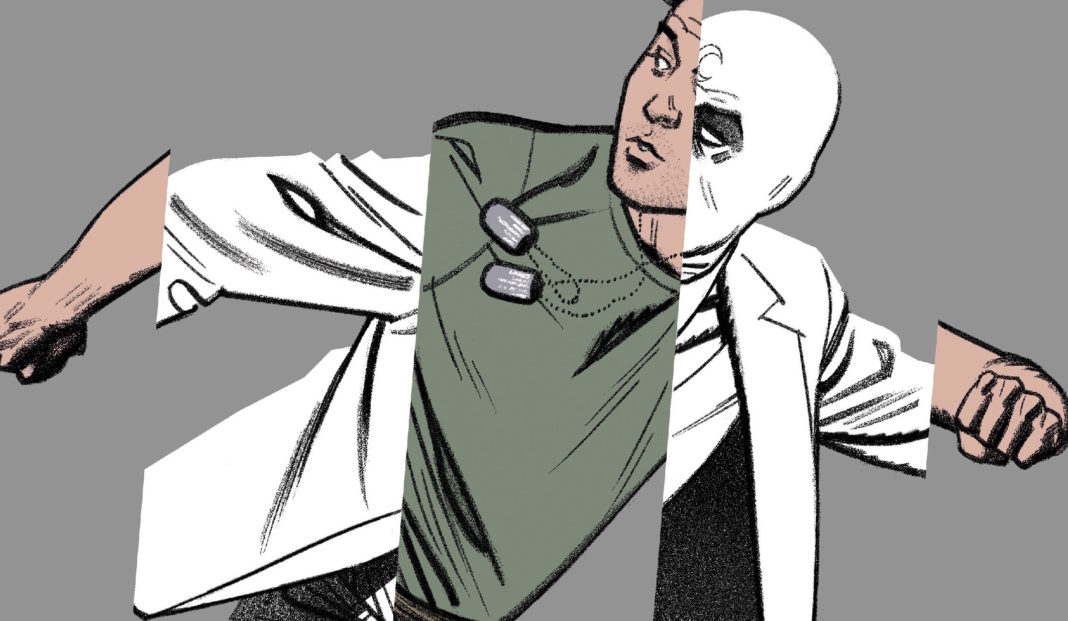 Last month, writer Jeff Lemire began another arc in Moon Knight’s latest adventure, which found him fighting against his former mentor, Khonshu, for both his life and sanity. In the current arc, “Death and Birth,” two stories meshed through the pages, combining Marc’s unique past with his odd, dream-like present. Slowly, Lemire showed us how Moon Knight came to be while taking Mr. Knight further into the strange dream world readers have come to recognize. Habitually, The Source recaps the story, analyzes it, and predicts what the future could hold in our Moon Knight #11 review.

Issue #11 begins in Marc’s past. Readers find him leaving the Putnam Psychiatric Hospital, under the care of a nurse, to go to his father’s funeral. Sadly, Marc does not feel welcome, admitting that his father was always embarrassed by him. After retreating to his childhood room for some fresh air, Marc escapes through a window into the night, following the voice of Khonshu.

After Marc runs into the darkness, readers find themselves back with Marc in the overvoid. After agreeing to retrieve an unknown object for Anubis in exchange for Crawley’s soul, Marc — in the guise of Mr. Knight — jumps into the overvoid, finding himself before two Egyptian soldiers on giant beetles. The following pages feature Marc fighting the two Egyptian soldiers and their fantastic beasts in this transcendent sandscape, but eventually, he is overpowered when reinforcements arrive.

Back in the past, Marc gets closer to becoming a mercenary after being dishonorably discharged from the Marines. While serving in Iraq, Marc loses himself to Khonshu’s voice. Two of his fellow soldiers find him naked in a minefield just watching the moon. Naturally, a commanding officer looks into his record and discovers Marc kept his psychiatric history off his military paperwork. Fearing for Marc’s safety, the major sends him home.

While the Marc of the past was going home to safety, the Marc of the present is being taken into a prison cell. With a newfound confidence in reuniting his multiple identities, Marc jokes with the guards as he is escorted behind the bars. Across the hall, he hears a voice speaking English, instead of whatever language the guards had been uttering. The voice walks out the darkness and reveals herself as Anput, wife of Anubis. Right as Marc realizes the purpose of his journey, the guards return, ready to sacrifice him.

However, this is, of course, not the end of the issue. To close, Lemire takes readers back to the past one last time, showing Marc as an underground fighter. After winning a brutal match, a man approaches him with an opportunity to make better use of his skills. On the final page, Marc looks up and we discover the identity of this formerly mysterious opportunity bearer: it’s Jean-Paul (Frenchie), one of Marc’s greatest allies.

Overall, Moon Knight #11 sets up an epic battle with Khonshu, but, just like the last 10 issues, that’s all it really does.

While Marc’s present trip into the overvoid is interesting enough, it doesn’t match the intrigue of the past, especially considering what role it could play in the future. By comparison, the events in the overvoid are just killing time. However, those who have been following the series since the beginning should be familiar with this. For all of the power and drama in the compelling confrontations between Marc and Khonshu, there are several issues that read as unnecessary parts of an overly decompressed narrative. Hopefully, next month will bring us closer to where we want to be and put the events of #11 into perspective.

Keep checking back with The Source for more updates on Moon Knight and all your other favorite heroes!