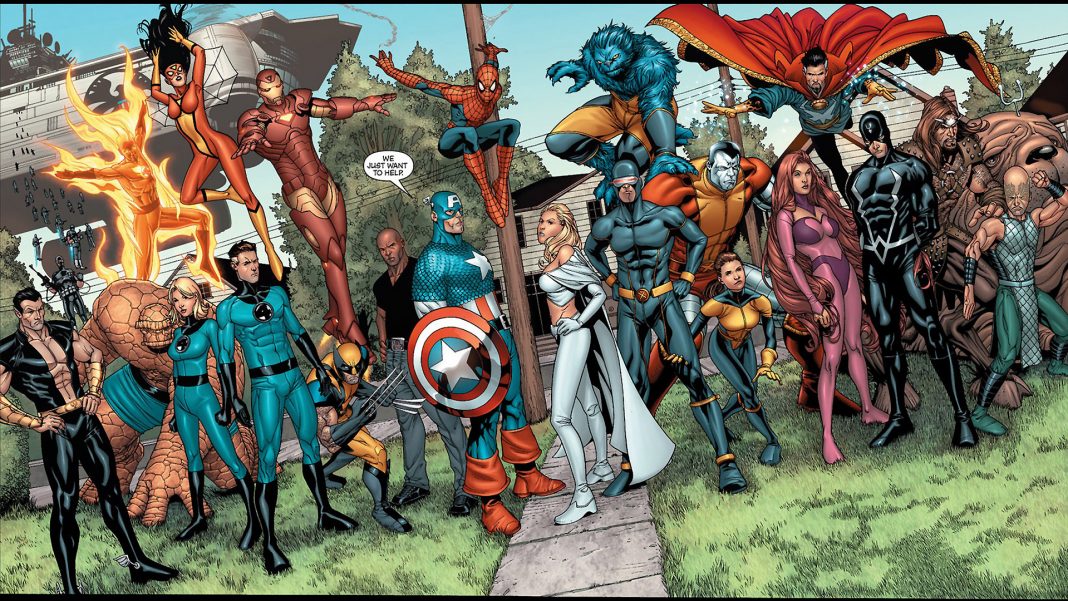 This is an age of conflict, and that conflict extends to the Marvel Universe. Marvel Comics is currently wrapping up Civil War II, a tale that saw Iron Man and Captain Marvel go to war over an Inhuman precog named Ulysses. Captain Marvel wanted to use Ulysses’ visions to arrest criminals before they committed acts of violence, while Iron Man did not want to let anyone suffer for the hypothetical sins of tomorrow. Each Marvel hero chose his or her side as heroes fell, and the Marvel Universe was torn apart. But can they heal? What will get the heroes of the Marvel Universe back together? What threats will rise that will cause hero to embrace hero? A divided MU cannot stand, so let us examine some potential events that could reassemble Marvel’s heroes after Civil War II!

Well, maybe not every hero will unite. Over in the pages of Steve Rogers: Captain America, it has been revealed that somehow, the time stream has changed and Steve Rogers has become a member in good standing of HYDRA. Right now, Rogers is plotting to take down the Red Skull, but what will happen when the Avengers and the other heroes of the Marvel Universe discover that their greatest has become the very thing they despise?

Cap is going to need help to fight his new past, and that may require the unity of the heroes.
Remember, the Red Skull possesses the brain of Charles Xavier (ew), so if Rogers can’t get the job done, it may take the heroes to ignore their many ongoing conflicts and unite once again to take down the mid-controlling Nazi. So, to stop the near-omnipotent Red Skull and to save Captain America, Avengers, Ultimates, X-Men, Inhumans, Champions, and everyone in between may have to gather on the same battlefield to make things right. How can the heroes stand united if the best among them has been lost?

2. And a Child Shall Lead Them

One must assume that only a world-shattering threat can fully assemble the Marvel Universe once again, but perhaps it will be an inspiration from a new set of Champions that will unify our heroes. Recently, the Totally Awesome Hulk, Ms. Marvel, the young Cyclops, Miles Morales Spider-Man, and Nova have gathered as Marvel’s latest Champions. These heroes may be young but they kick it old school. No politics, no moral dilemmas, no killing, just straight-up classic hero versus villain, heroism for heroism’s sake. The Champions are all young and fresh to the superhero scene, but their mission statement of helping people and combating evil instead of punishing it could be the very thing to inspire the more mature heroes of the MU and put them on the right path once again.

How will a conflict between heroes unite heroes? Well, perhaps after the fallout of the war between mutants and Inhumans, the heroes of the MU will have no choice but to unite to pick up the pieces. The Terrigen mists are killing and sterilizing mutants, and those that wear the letter X will need help surviving this horrific plague. The Inhumans have long been allies of many Marvel heroes, so perhaps the Avengers and other heroes and teams of the Marvel Universe will find unity in intervention. Maybe the need for peace after a war between those two great and powerful races will be very thing to finally heal old wounds.

Nothing can unify heroes like Thanos. When Thanos arrives, bad things happen, and only a unified front has a chance to stop the Mad Titan. Huge seismic events are happening in Marvel’s new Thanos title (have you read it? It’s AWEsome!) and the big bad plot twists of this new monthly could have major repercussions on the heroes of the Marvel Universe. Let’s just say, without spoiling things, that Thanos will be more motivated than ever to bring destruction to all the realities of the Marvel Universe and it will take every Avenger, X-Man, Ultimate, Inhuman, Champion, Thunderbolt, and the rest to stop the worshipper of Death.

Jane Foster has served the Marvel Universe as Thor in a more than exemplary fashion. As fans know, Foster has been fighting the good fight both on Earth as a member of the Avengers and in Asgardia as the Goddess of Thunder. When she’s not Thor, Foster is struggling with late stage cancer, and the more this brave woman uses her powers, the faster she deteriorates. Tragically, it looks as if Foster won’t be defending the Marvel Universe for very long. Maybe it will be her demise that brings her fellow heroes together.  As Thor, Jane Foster has been one of Marvel’s noblest heroes. Will her final sacrifice cure the rift that has divided Marvel’s greatest warriors?

We don’t yet know Tony Stark’s fate post-Civil War II, but we do know that two new heroes have taken up the mantle of Iron Man. First, there’s Riri Williams and second, there’s Victor Von Doom as the Infamous Iron Man. Doom’s real motivations have yet to be revealed. Has he truly sided with the angels after decades of being the greatest evil of the Marvel Universe, or has he made the ultimate heroic turn? One thing is for sure: if Doctor Doom is planning something malevolent as Iron Man, it will take a unified Marvel Universe to stop his infamous plans.

7. Let’s Do the Time Warp Again

Kang has been featured in Mark Waid’s relaunched Avengers title in a big, bad way and if there’s one thing Marvel fans know, it’s that a fractured heroic pantheon cannot stop time’s greatest evil. Recently, the Vision abducted Kang when he was an infant to prevent that bouncing baby tyrant from growing up to become the timestream’s greatest heel. In previous struggles, it has taken Marveldom united to take down Kang and keep from conquering all of time and space. All the heroes of the MU, not just the Avengers, may have to unite again to keep time itself from imploding. Thanks, Vision!

Recently, in the pages of Doctor Strange, the alien race known as Empirikul all but eradicated the world of magic. So what would happen if, let’s say, Dormammu or Nightmare arrived to take advantage of this situation? The heroes that have been so divided will have to come together to hold off an interdimensional incursion because these days, Doctor Strange just doesn’t have the magic juice to handle it himself.