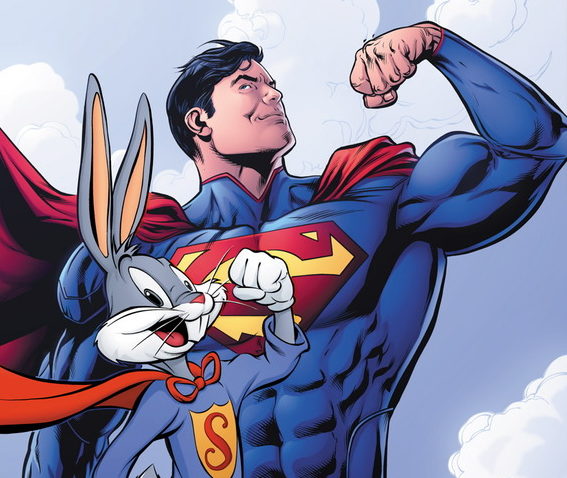 While the New 52 era of DC was a mixed bag, one thing it excelled at was the utilization of variant covers. Almost every month, the variant covers would have a theme –sometimes they’d all be drawn by the same artist like John Romita Jr. while others would have a character like the Joker appearing on the cover. While there were a ton of variant themes, a select few really stood out. So, check out the following, especially eye-catching New 52 variant covers!

In November 2014, 25 DC titles had a variant cover featuring the heroes as LEGO characters. Sure, it may have been done to cash in on the LEGO Movie, but the covers were fun and exciting! Here is the cover to Justice League #36.

Another stand-out is the cover for Batman & Robin #36.

In March of 2015, DC had a little fun with their covers and made movie poster variants. They featured the heroes we know and love mimicking classic movie posters, like Batgirl‘s Purple Rain cover.

The powers that be gave Teen Titans a Lost Boys-inspired cover.

And while this isn’t one of my favorites, I thought I’d add it for the ladies reading this. They made a Magic Mike-inspired Justice League #40 cover.

And now for my favorite of the bunch: Action Comics #40 has a Bill and Ted’s Excellent Adventure cover.

In August of 2014, DC made their variant covers reflect the sign of the times with selfie covers! What, you thought Green Arrow or the Flash didn’t have a moment to take photos and work on their Instagram game? Here’s some super friends taking a pic on the cover to Justice League #34.

Here is the amazing Amazon snapping a pic and creating some #vacationgoals with Wonder Woman #34’s variant cover.

The Flash is having some fun with the last son of Krypton in another legendary race and taking a pic to mark the occasion.

Finally, in the Batman/Superman #14 variant, the man of steel and the dark knight take the world’s finest selfie!

And finally, to my favorite batch of variant covers….

As a kid, I watched the Looney Tunes on TV almost every day on Nickelodeon and on Saturday mornings on ABC. Seeing some of my favorite cartoon characters gracing the DC covers brought a huge smile to my face in November of 2015. Here are the tunes on the cover to Justice League #46.

Tweety Bird and Sylvester the Cat get ready for a battle for the ages in the variant to Batman/Superman #26.

Aquaman clearly took a wrong turn at Albuquerque in this cover to Aquaman #46.

And finally, my favorite one, the variant to Detective Comics #46. Not only does the cover look awesome, it pays homage to the classic Daffy Duck short The Great Piggy Bank Robbery! The short itself is a parody of the Dick Tracy comic strips of the 40s. It’s definitely worth a watch!