Home COMICS Hulk vs. Wonder Woman! Who Will Win? YOU DECIDE! 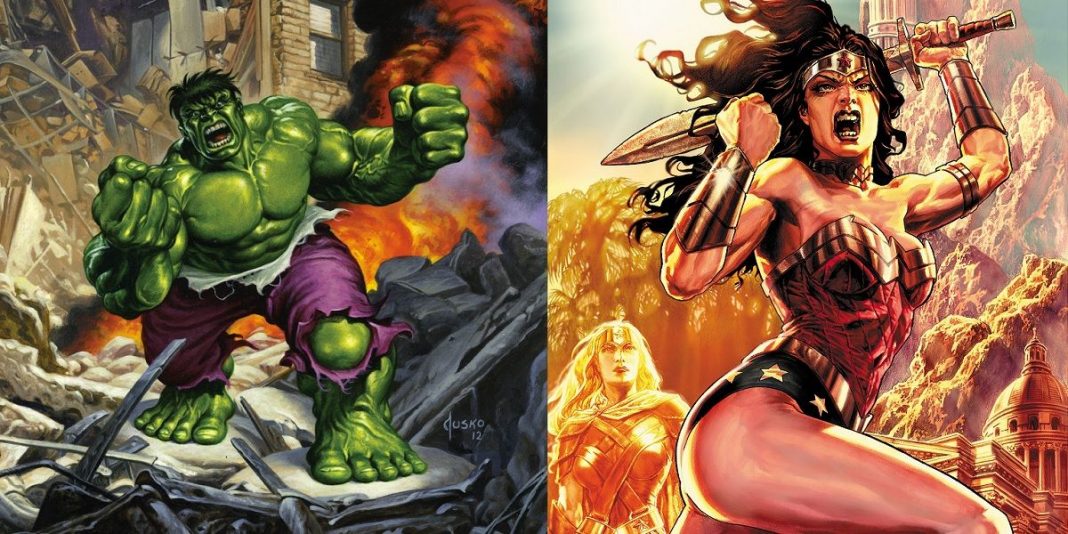 Dimensions are liberally leaking their respective existences all over each other, allowing for the unexpected meeting of Bruce Banner, aka The Incredible Hulk, and Wonder Woman, aka the daughter of freaking Zeus and Themysciran ambassador to matriarch’s world. And yes, I know that (SPOILER) Banner died at the hands (or arrow) of Hawkeye, but this little dust-up occurred pre-mutually agreed upon ‘Hulk-icide.’ Anyway, they meet, Hulk is Hulk, so they fight. Who wins? Well, that depends on who you pick in the twitter poll below!

It’s Wonder Woman vs. The Incredible Hulk! Who will win? YOU DECIDE!

She’s the daughter of Zeus, wielding his incredibly powerful lightening bolt! She’s also imbued with the abilities of several other gods, making her more powerful than Hercules and comparable in strength to Superman. In fact, on some occasions, she draws her strength from the Earth, making her, yes, as strong as the Earth. So…she punches you with the strength and solidity of incalculable mountains and raging rivers, meaning…you’re effed.

She also benefits from other magical, god-bequeathed endowments including durability, flight, enhanced senses, super-speed and dexterity, communication with animals, and especially powerful armaments including the truth-wringing Lasso of Truth and the Bracelets of Submission.

That stupid Rick Jones had to be listening to his…uh…boom box on a HIGHLY restricted missile testing site where, lo and behold, the military was about to blow the hell out of their first Gamma Bomb. Well, Banner ran out to save the young lad, but ended up being saturated by said, recently exploded Gamma bomb. So, incalculable doses of incredible radiation + father-induced psychological trauma = an unstoppable beast aroused by anger and intensely stressful situations whose strength and rage know no bounds. Yup.

And besides nearly incalculable strength and durability, the Hulk can absorb massive amounts of energy and augment his already ridiculously augmented strength. Heck, he even went toe to toe with the freaking Sentry during “World War Hulk,” absorbing the power of one-million suns and fighting the Golden Guardian of Good to a stand-still. So, yeah, the Hulk is a freaking collection of 1,000,000,000 rage-warheads aimed at…whatever irks him.

So, who wins? YOU DECIDE! Choose your victor in the twitter poll above, and if you’re so inclined, tell is why you chose your particular contestant in the comments section below!