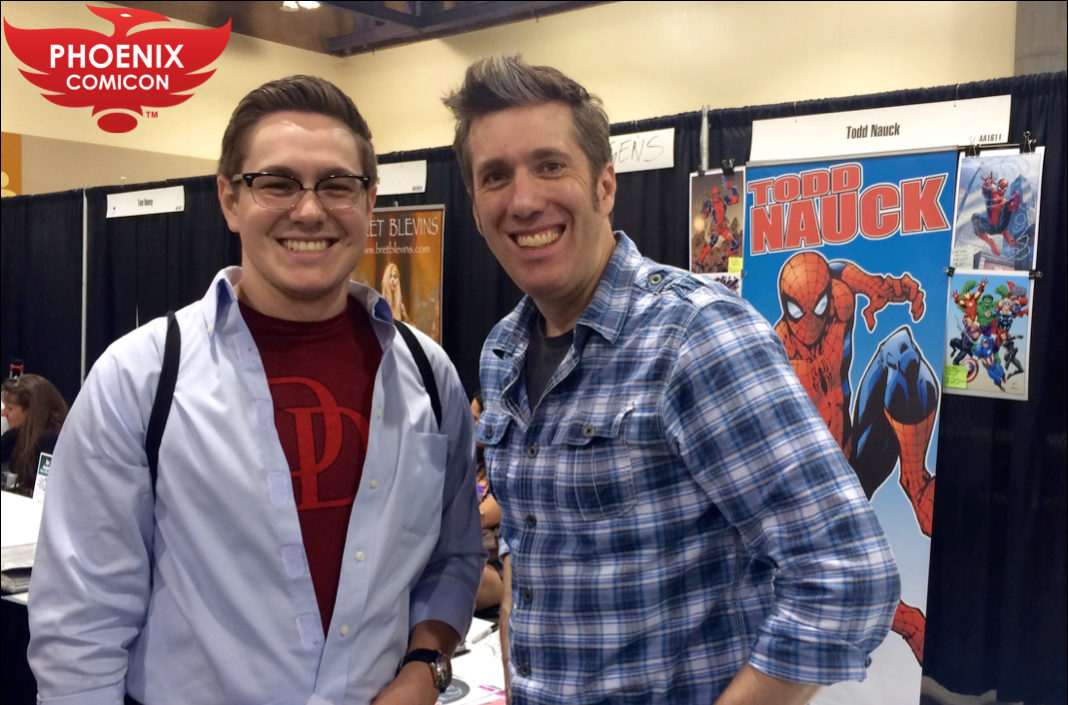 The most insightful and perhaps most inspiring interview spawned from a conversation with Todd Nauck. He is best known for his art on Amazing Spider-Man #583, the historic Spider-Man/Barack Obama Team-up, which went on to be the best-selling comic of the last decade. However, Todd has also done incredible work on multiple issues of Amazing Spider-Man, Friendly Neighborhood Spider-Man, Teen Titans Go, and Young Justice. One of his favorite series to work on was 2014’s Nightcrawler, written by the legendary Chris Claremont. Yet Todd Nauck’s work goes far beyond comics and has been featured on ABC’s Extreme Makeover: Home Edition, ESPN’s NFL Sunday Countdown, and on SportsCenter. You can keep up with Todd’s work on his website toddnauck.com or by following him on Twitter @ToddNauck.

While working on a commission, Todd was able to speak with me about his artistic style, his greatest triumph, his work on various comics, and the best piece of advice any artist can hear.

I decided to start the interview with a simple yet informative question to get a glimpse into the inspiration behind Todd Nauck’s work:

So is there a particular comic that inspired you to be a comic book artist?

From there, Todd began to tell me when he knew he wanted to be in the business. “At age fourteen, when I was a freshmen in high school, I took some printer paper, folded it in half, and wrote and drew an 8 page comic in one night, and it was so much fun, I knew that night: this was what I wanted to do for the rest of my life.”

That’s awesome! Well you have obviously gone on to be very successful.

“I’ve been very blessed. Definitely,” Todd replied with a smile as if that fourteen-year-old boy in him couldn’t believe how far he’d come.

You’ve been so successful, in fact, that you got to do the art for Amazing Spider-Man #583 [the Spidey/Obama Team-up]. What was that like?

“Dude, that was pretty amazing! When I got that job offer, I was very fortunate that I got picked to be the artist of that story. And I knew that this would be something big because Barack Obama, historic president, you know? First African-American, Black President. That was huge, and I knew, as I was working on the story, if the Death of Captain America makes it on CNN and the return of Barry Allen makes it on CNN, the most historic president of our time meeting his favorite childhood superhero in a comic book; that’s going to make headline news. That’s going to be on CNN. That’s going to be a big news story, so it wasn’t lost on me that this was going to be big. Now, I didn’t expect it to be five printings in six weeks, but I figured it’d get a lot of media coverage. And it was a banner year that year. I got invited to all sorts of conventions that year, 2009. So yeah, definitely a huge honor.”

Amazing Spider-Man #583 is now recognized as the best-selling comic of the last decade, and in talking to Todd, I could see how much working on that comic – which is now seven years old – meant to him. Just in hearing the issue number – #583 – he lit up, excited to tell me all about it. However, we had plenty more to talk about.

So aside from working on Amazing Spider-Man, you also worked on Nightcrawler with Chris Claremont? What was that like to work with him?

“That was huge because Uncanny X-Men was the first comic I started reading regularly as kid, so it was Chris Claremont’s Uncanny X-Men. I’m a child of the 80s, so as a kid of the 80s, Uncanny X-Men was my jam. So a chance to get to work with my favorite X-Men writer and on one of my favorite X-Men was… mind-blowing! It blows my mind now just thinking about it, and in fact, I had to pinch myself for the first half of the series. It’s like, ‘I’m working with Chris Claremont. I’m creating new mutants with Chris Claremont! This is soooo wild!’ And Chris has been a great friend. He’s been really cool to me. I see him at conventions; we go out to dinner and stuff. If you told fourteen-year-old Todd this would happen, he would have said ‘No way! Impossible!’ It’s really, definitely a huge honor as well.”

Speaking of writers like Chris Claremont, have you ever thought about doing anymore writing aside from just the drawing?

“I have done a little writing. I did a creator-owned series called Wildguard. I did that at Image after I finished my run on Young Justice at DC Comics. I went to Image and did my creator-owned series, Wildguard, about a reality TV superhero team, and I wrote and drew twelve issues of that series. The first six-issue story arc is in trade paperback; it’s called Wildguard: Casting Call. And it’s fun! I want to do more writing. I got a lot of other ideas of creator-owned stuff I want to do, but Marvel just keeps me hoppin’ with projects. They’re too fun to pass up, so I’m focusing on that but still prepping things on the side to do at least some short stories, you know, or some other type of creator-owned stuff. Getting that ready so when I have the free time, I can just delve right into it.”

Seeing how busy Todd was, I moved right on to my favorite, final question.

Lastly, if you could go back in time to the ‘you,’ who just finished that eight-page comic and realized, “I want to be in comics,” what advice would you give yourself?

“The advice I’d give myself,” He pondered.

Todd took a moment to consider his answer. Little did I know that he was about to give me the most profound answer to that question in my entire weekend at Phoenix Comicon and inspire me and my writing for days, possibly years, to come.

A second later, he had it his answer. “It took me years to realize this, and I’d try to convince fourteen-year-old Todd of this, at that time if I could: DON’T COMPARE YOUR ART TO EVERYONE ELSE’S.” [He did not yell this at me, but it deserves to be in Caps.]

He went on to explain, “That is a toxic way of thinking. It shackled me from really experiencing the fullness of what I can do in my art. When I finally realized I don’t have to compare my art to anyone else’s art, whether it be Jim Lee, Alex Ross, Bruce Timm, or anyone in-between, whatever their style, I don’t have to compare it. I can be inspired by them. I can look at their work and be inspired by them to create whatever I want to create, but to compare my work to their work, it was burdening me. It was weighing me down because nothing would ever be good enough. So I’d always be disappointed and always frustrated. When I let go of that idea and just [realized] I’m going to do what I do my way and not worry, not say ‘Well that guy is better than me…’” He paused briefly before continuing. “Everyone, every artist has their own resources, their own path that they walked, you know, their own classes they took, their own whatever it was to get where they are. We all have our different journeys, and I can’t compare my work to theirs. Jim Lee had different opportunities than I did. And that’s why his art is the way his is, and that’s why my art is the way mine is. And both of our art styles are valid because we’re both seeking to do the best art that we can.”

In conclusion, Todd told me, “So when I learned I don’t have to compare myself to any other artists, then it freed me up. Now, I still can slip into it because I’m human. Sometimes I can go ‘Ugh, I’m having a bad day. Man, J Scott Campbell that’s awesome! I suck!’ You know, I can have those days, but I also learned I can change the way I think. So when I can catch myself thinking negatively, I do what I can to switch that up. I’ll either go check my email, have a bowl of Apple Jacks, come back to the drawing table with a fresh eye; it’s like ‘Alright! Let’s have some fun!’ And if I do that, the day goes better. I’m more productive. I’ve had more fun. I’m happier with what I’ve done, even if it’s not perfect. If I had fun, then I’ve achieved my goal because one thing that I’ve learned in the industry: when I have fun with a book, the readers have fun. That’s why Young Justice is one of my favorite books, and it’s still so popular to so many people who read that book back in the day. So, that’s my attitude. That’s my value there. And I would instill that into fourteen-year-old me. The sooner I could have learned to stop comparing my art to someone else’s the better off I’d be.”

Enlightening, right? Of all the answers I received, Todd was willing to open himself up and give me some of the best advice I had ever heard. In fact, I’d like to repeat that to anyone currently reading this, whether you’re an artist or a writer: you don’t have to compare your work to anyone else. Just have fun. Todd Nauck has had fun his whole career, and he has been able to work on some of the greatest comics with some of the best in the business. Yet despite all that, he is still one of the most humble people I’ve met, who even seemed excited to be interviewed by me, a twenty-year-old just wanting to know more about the people behind the comics he loves.

Once again, be sure to follow Todd on Twitter @ToddNauck to keep up with all of his work, and don’t forget to check out the rest of my interviews from Phoenix Comicon 2016.