Home COMICS Kingdom Come Retro Review: Up in the Sky 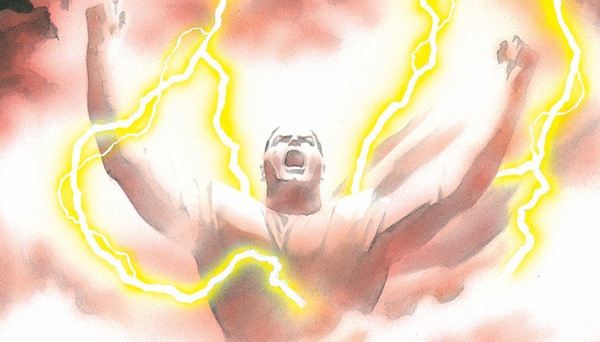 When last we checked in on the Elseworld of Kingdom Come, heroes had chosen sides and schemes were hatched. Things were heading toward a boiling point. However, this series still has a few surprises left up its sleeve as detailed in our third Kingdom Come Retro Review: Up in the Sky.

UP IN THE SKY

Once again, we are reviewing a 20-year-old series, but be forewarned: SPOILERS FOLLOW!

We open this month with narrator/reader surrogate, Norman McKay, having a vision of Shazam. The man formerly known as Captain Marvel still hasn’t made his presence felt in Kingdom Come, but McKay’s vision is a guarantee that he will…soon.

The next thing the reader sees is the Justice League’s gulag. Constructed in irradiated Kansas, the prison looks exactly like the headquarters of the Legion of Doom from Super Friends. Yet another genius homage from Alex Ross.

The gulag, overseen by Mister Miracle, is filled to capacity with the new generation of metas we met in earlier issues. They are being force-fed Superman’s golden age philosophy and it’s not going well. Just imagine trying to graft a Siegel & Shuster story into an Image comic.  You can see the problem.

Meanwhile, the unholy alliance of Batman and Lex Luthor is creating an army of giant Bat-Bots to use in their battle with the Justice League. And McKay has a heart-to-heart with Deadman.

THE HOUR OF HIS JUDGMENT IS COME

There is a lot going on here, but the heart of the issue is a heart-to-heart between Superman and Wonder Woman regarding the nature of power and its use. Another line is drawn between these two as Wonder Woman takes the Malcolm X “by any means necessary” position and Superman takes the Martin Luther King, Jr. position of “power requires peace.” It’s a fascinating look inside the minds of these two characters as they grapple with their feelings for one another and the world around them.

Tensions in the Gulag inevitably reach their boiling point. A hero dies and the Justice League moves in, but it will prove to be too little too late, because a wild card has been added to the mix.  Shazam, still under the thrall of Lex Luthor, stops Superman cold and the stage is set for the grand finale in issue four.

Waid keeps all of the pieces moving as we head toward Armageddon. Ross keeps the background filled with references galore. Kingdom Come keeps on rolling.

Check out our retro review of Kingdom Come Part One: Strange Visitor by clicking the preceding, incredibly obvious, light blue text usually indicative of a link. 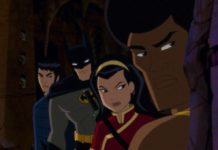 Batman: Soul Of The Dragon Review 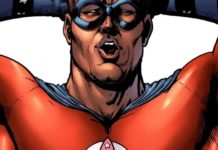