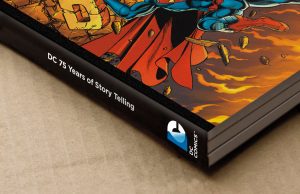 The comic book industry has gone through some changes in the past twenty years, and one of the big markets is collected trade paperback editions of stories. However, are they worth the money and are they right for you? I’m familiar with the internal debate about whether or not to get comic books instead of waiting for the collected story arcs in trade form. Well, I am here to help you solve that internal dilemma as I give you the pros and cons of buying trade paperbacks and monthly comic book issues.

Wow I just dated myself there.

2. Another pro to collecting monthly issues is that you will certainly be helping your local economy, since most comic shops are locally owned and operated. Helping local businesses is always a good deed! After all, local comic shops are where most comic books are sold these days. Without them, where else would we fans get our fix of our favorite heroes and villains?

3. Also, hunting for back issues of a series is always enjoyable. One of my fondest memories collecting comics is filling in the missing issues of the Kevin Smith/ Joe Quesada run on Daredevil. It was a state-wide adventure going to various comic book stores across Massachusetts hunting down all those issues.

4. Collecting monthly issues of a series also means that once in a while, a book you own will become “hot” and skyrocket in value. It doesn’t happen often anymore, but when it does, it’s a great feeling.

1. For every upside, there is a downside to collecting comics on a monthly basis. One of them is that by collecting monthly, you don’t get the entire story in one issue anymore. Especially with Marvel and DC, almost every issue of every series published is just one part of a six-part story. I noticed this, especially with DC’s first Rebirth issues. In issue 1 of Batman, it was all buildup, no pay off. The best way I can describe it is that it was like watching the first ten minutes of a movie, and then shutting it off. And then watching the next ten minutes three weeks later. Frustrating.

2. The cost of monthly books is also a big con. I remember back in 2005 I was baffled when they raised the price of monthly comics from $2.25 to $2.50. WHAT?!?! Now, those are the good old days. If you want to collect multiple series on a regular basis, you have to pick and choose which books make up your collection. With some books costing $5, like All-Star Batman, and most Marvel books costing $4, it just makes it harder for fans to collect single issue books. I’m glad DC lowered the price of most of their books to $2.99, but collecting like eight series at once begins to get expensive.

On the flip side of a point I made earlier, collecting trades means you get the entire story in one sitting. No month-long breaks between issues! You get the complete story from beginning to end!

Also, no handing over your hard-earned money to greedy comic book store owners who gouge the price of a hot book because they know someone will be willing to pay $500 for Amazing Spider-Man #300 (first appearance of Venom).

One awesome aspect of trades is some of them have special intros from the writer or artist who worked on the story as well as bonus artwork. I remember reading the intro to a trade paperback of the Dark Knight Returns and got some insight on how the story was developed by writer/artist Frank Miller I wouldn’t have found anywhere else.

I hope this helped you out while you debate which route you should take with your comic collecting. Both are great options to go with, and no matter which way you go, you get great stories.

So what method of comic collecting do you like? Think trades are the way to go, or is it too easy? Let me know in the comments below!