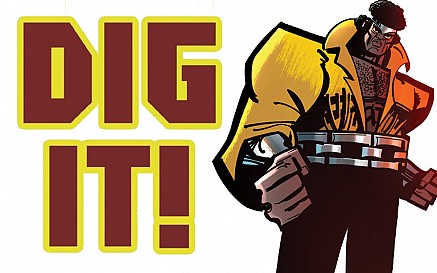 Luke Cage wasn’t always a gruff hip-hop anti-hero. Before his much needed 1992 update, Cage was a Blaxploitation homage who had outlived his source material. Now, as we find ourselves in a Cage renaissance, including the new Netflix series, somebody has decided to step back in time and write a series set in the swinging 70s, and man is it a great read.

The man who brought you Dexter’s Laboratory and Samurai Jack gets his hands on Luke Cage and makes it all his own. Writing and illustrating the series, Genndy Tartakovsky gives the series a style that reminds me of his famous work for Cartoon Network, as well as the old Fat Albert cartoon series.

The issue opens with Power Man stopping a team of roller-disco bank robbers in a glorious two-page spread done in tones of red, yellow and black, accompanied by appropriate onomatopoeia. These pages set the tone for the whole issue.

As Cage works his way through the sweltering New York night, he gets stood-up by Misty Knight and has a run-in with the “New” X-Men.  Finally, he runs into a majority of his rogues gallery who have decided to team up to take him down.

CAGE!, with its cartoonish visuals and whimsical narrative is a welcome change of pace from the all of the grim and gritty Civil Wars and Rebirths that have become the norm in today’s comics. The story is simple and straightforward. It establishes its premise early and then runs with it all the way to the finish line.

Don’t come into CAGE! expecting the Bendis/Netflix iteration of the character. Pick up this book if you’re looking for something fun to read.