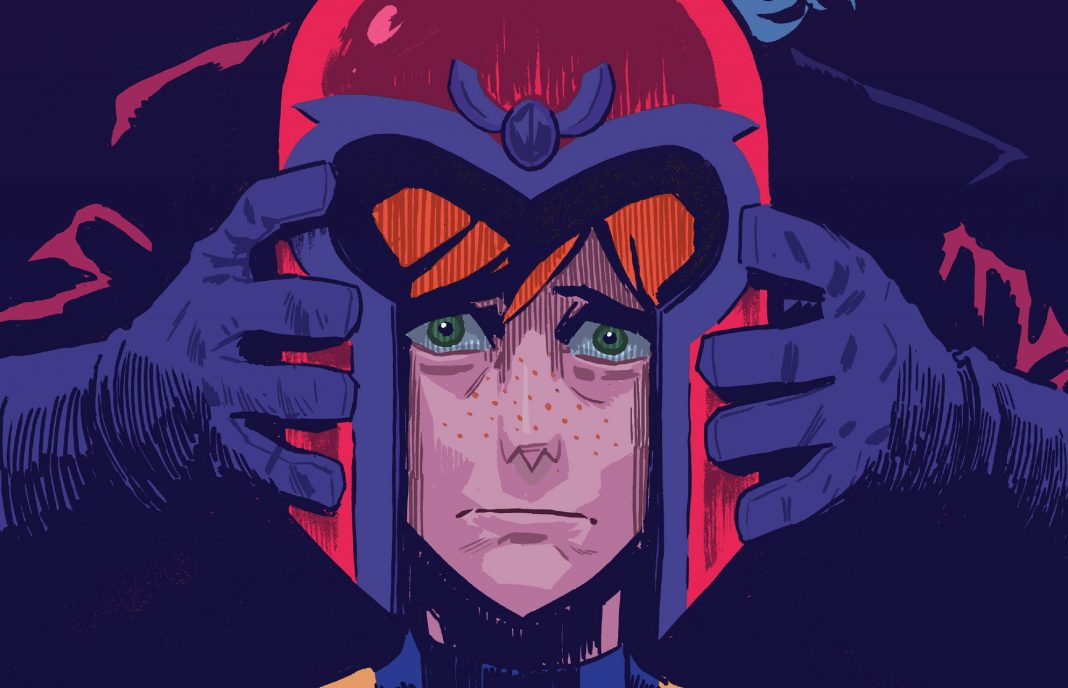 The end is nigh! The mini-series, X-Men: Worst X-Man Ever, which has slowly made its way into our hearts, will be concluding next month on June 29th. For now though, we have time to bask in another installment, issue #4 of 5. Thanks to the comedic and critical writing style by Max Bemis, the singer of Say Anything, and the artistic talent provided by both Michael Walsh on pencils/inks, and Ruth Redmond on colors, we have been frightfully entertained by the series so far; it’s taken a look at the idea of being the most useless mutant of all time. The embodiment of this idea is Bailey Hoskins, and this our VERY SPOILER-filled review of his journey in X-Men: Worst X-Man Ever #4.

When we last saw our protagonist, Bailey Hoskins, he had been kidnapped by the Brotherhood of Evil Mutants, including Magneto, Mystique, Toad, Blob, and Pyro, yet this not what the reader sees when opening the comic. The story begins with a cute, innocent baseball game among some of the most recognized X-Men, such as Cyclops, Wolverine, Nightcrawler, Storm, and Colossus. Sooner rather than later, the reader begins to feel uncomfortable. Not to say that all comic book fans desire consistent conflict, but the game just feels off. Sure enough, that gut-feeling bubbling below is on the ball, and Bailey storms onto the field. Without a moment of hesitation, he proceeds to trash talk in Cyclops’ face and eventually uses his ability to explode, killing the leader of the X-Men. With the turn of the page, we see Bailey bound to a chair, telling Magneto, “Okay. Fine. I’ve thought about,” confirming that the opening was all just a dream.

Back in reality, the reader finds Bailey tempted by the Master of Magnetism. As Bailey attempts to remain morally upright, Magneto rants about the inability of those willing to ACTUALLY fight for the rights of minorities beyond the 40 characters found in a tweet. In this moment, Bemis is presumably voicing some of his own justifiable concerns toward the world through Magneto’s already distorted viewpoint. However, this rant does not last long. Before he can reply Bailey is given a knock-out punch, and after receiving said punch, the reader sees into his dreams one last time. Bailey envisions a world ruled by Magneto: mutants destroying humans, doing as they please, being sworn into office, saluting an older version of Bailey, and burning Xavier’s School in green flame.

Sometime later, the reader finds Bailey and his dysfunctional team battling Juggernaut in the Danger Room, which leads to an internal brawl and a surprising twist. After insulting Bailey for what seems likes the millionth time, Bailey does his best to hurt the arrogant mutant, Riches. However, Riches holds him down and punches away until Storm intervenes, sending both boys to Xavier School equivalent of the principal’s office: Professor Xavier’s office. After giving the two a typical, Xavier-style speech about why mutants must persist in their fight, Bailey feels proud of himself for not betraying the X-Men, but his pal Riches doesn’t share the same sentiment. Oh, and he might have killed the Professor.

Until next month, we have no clue how successful the attempt on the Professor’s life will be, but we do know how this issue was. It saw Bailey take some turns to the dark side, especially within his mind, but in true comic book fashion this was all undone by a speech from the wisest X-Man of all. Yet with Bailey coming so close to evil, it seems anti-climactic that one speech would change it all. The build-up into a final decision between good and evil has gone on since the second issue of the short series, and one would assume it would end in some larger event. But maybe it’s not over. Maybe Bailey will still be tempted next month, or maybe this is another way Bemis is trying to defy the typical comic book formula. Either way, the issue is still a great read, which finds the aspects of the prior stories culminating into the final twist.