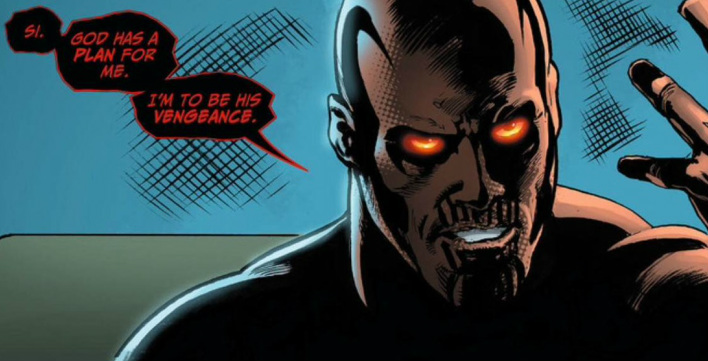 Other than DC’s lady of the hour Harley Quinn, El Diablo has become the major New 52 era addition to the Suicide Squad. In truth, before joining Amanda Waller’s team of scumbags, this pyrokinetic threat didn’t have much of a history- but the name El Diablo did. In truth, that devilish moniker has quite a history as far as DC Comics is concerned, and we’re going to break it down for you. Beware though; things may become a bit….hot (*cough-cough*)…in our history of El Diablo.

No relation to Lois sadly, Lazarus Lane was the first DC hero to use the name El Diablo. This was back in the Old West era of DC so this El Diablo joined the likes of Jonah Hex, Batlash, Nighthawk, and Cinnamon as some of DC’s two-gun standouts. The original El Diablo first appeared in All-Star Western #2 (1970) and was created by Robert Kanigher and Gray Morrow.

Lazarus Lane was a bank teller (which is probably the least exciting profession for a comic book adventurer but stick with us here). Lane was set upon by owlhoots and murdered. After which, his body was stuck by lightening (jeez, what is he, Kenny from South Park?). Lane’s beaten, smoldering corpse was found by a shaman named Wise Owl who resurrected Lane as the spirit of vengeance, El Diablo.

It was kind of like a Ghost Rider meets Zorro meets Sleepwalker sort of thing as Lane went into a comatose state whenever El Diablo awakened to seek vengeance. El Diablo had a nice solid run in All-Star Western, and let it be said that it was one classy strip. Morrow really brought his artistic A-game to El Diablo as the strip melded classic Western styling with shadowy horror visual cues. El Diablo was like an unstoppable whip-cracking, pistol-firing Zorro riff that made DC’s Old West quite the creepy place.

One of the most memorable, old school El Diablo Western yarns took place in a very unlikely place. In Swamp Thing #85 (1989), writer Rick Veitch and artist Tom Mandrake sent Western heroes Jonah Hex, Bat Lash, Johnny Thunder, and Madame .44 (best name EVER) to try to defeat a suddenly evil Wise Owl to free the soul of Swamp Thing. When Wise Owl was defeated, the soul of El Diablo was released from Lazarus Lane, freeing Lane from his longtime curse.

That seemed to be the end of the Western El Diablo, but the character was to return in the New 52. In the pages of the new iteration of All-Star Western, a new El Diablo was introduced. It was all very similar to the OG El Diablo, except this Lazarus Lane became El Diablo whenever he lost consciousness. So basically, when trouble reared its ugly head, Lane had to bash himself in the coconut in order to bring out the whip wielding spirit of vengeance.

All jokes aside, the original El Diablo began DC’s devilish Diablo tradition and paved the way for the modern day version of the character that will soon appear in Suicide Squad.

The second iteration of El Diablo took place in modern times but borrowed many cues from the original Western hero. This El Diablo first appeared in El Diablo vol. 2 #1(1989) and was created by Gerard Jones and Mike Parobeck. This El Diablo was kind of a precursor to Brain K. Vaughan’s Ex Machina as it featured a superhero whose civilian identity was a public servant. This El Diablo was actually Rafael Sandoval, a young member of the Del Rios, Texas City council. Frustrated by corruption, Sandoval donned the raiment of a modern El Diablo to fight drug dealers, serial killers, and a serial arsonist to protect his city. The whole thing is more Longmire than classic superhero storytelling, but it’s still a hidden gem of DC history. Sandoval made a handful of additional appearances in a few Justice League titles and even in Villains United but one of the first politician superheroes was soon put out to pasture. But like Lazarus Lane, the name El Diablo would soon rise again.

The third El Diablo first appeared in El Diablo vol. 3 #1 and was created by Jai Nitz, Phil Hester, and Ande Parks. This new El Diablo will be the model for the upcoming film version and this character was very different from his Western counterpart. That being said, there is a bit of the original El Diablo melded into the origin of Chato Santana version.

Santana was a drug dealer and all around terrible person who did whatever it took to protect his territory. While a criminal, Santana also protected his family and the people of his neighborhood. The best part about Santana was that he was not in any way a walking stereotype. I know what you’re thinking- “Hey, a Hispanic character- of course he’s made a drug dealer.” But there were layers to Santana as he was part Robin Hood and part Walter White- a complex hero in complex times. During the course of his introductory series, Santana met a 170-year-old Lazarus Lane and became the modern El Diablo. As this new anti-hero, El Diablo protected his ‘hood while trying to keep from losing his own soul.

Even though the third El Diablo did not set the sales charts on fire, there was something about Santana. So when DC was putting together a new Suicide Squad for its New 52, the Santana version of El Diablo was on board. The drug dealer conceit stayed in place and when the New 52 El Diablo was introduced, it was established that this was a man with a dark past.

The New 52 El Diablo used his pyrokinetic powers to take out a tenement filled with a rival gang. Sadly, there were also women and children in the building. El Diablo was arrested for his actions and ended up under the care of Amanda Waller. El Diablo joined the Squad in order to repent for his sins. During his first mission as one of Waller’s Squad, El Diablo suffered from religious delusions as he descended into guilt-ridden madness. In truth, El Diablo was a victim of post-hypnotic suggestions by the evil Basilisk. El Diablo betrayed his team and was defeated. Feeling repentant for the murders he committed and his betrayal of his team, El Diablo sacrificed himself by dragging one of the Squad’s enemy to Hell.

This gangbanging El Diablo may be gone for now, but he serves as the template for the version of the character soon to appear in the film.

I’m sure that when fans get a load of the film version of El Diablo, the character will return in the Rebirth era of DC Comics. But no matter how long fans must wait for El Diablo to return, there is a rich, back history to explore for this hidden gem of a character.