Home COMICS A Tale of Two Novas: Who Will Reign When Richard Rider Returns? 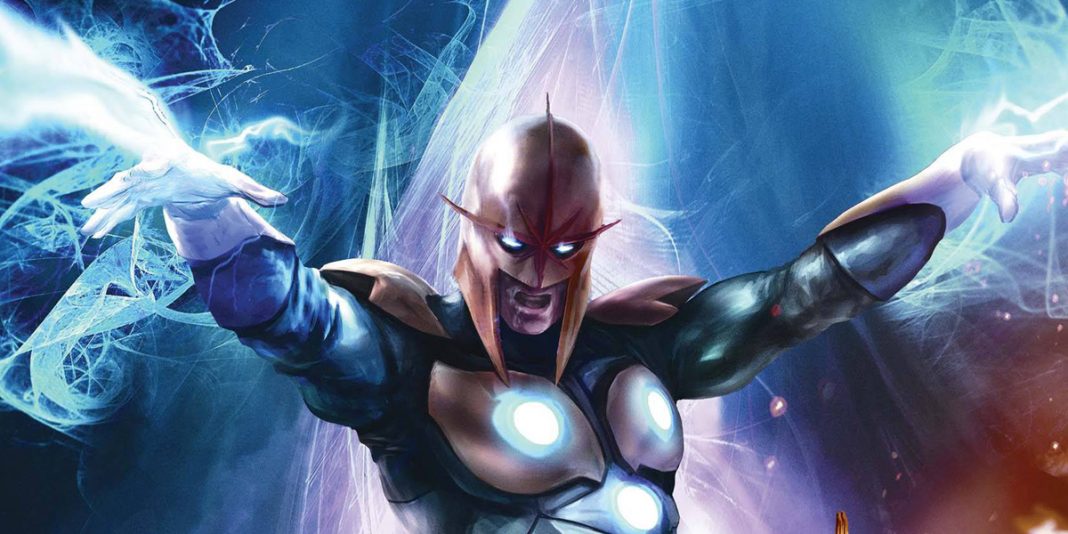 Thirty years ago, Marvel unleashed one of the greatest and possibly most underrated heroes on the world in Nova #1. Since then, Nova has played a vital role in saving the galaxy from some the greatest threats of all, including Thanos and Annihilus. Of course, all of this was accomplished by the original Nova, Richard Rider. However, since his death in the Cancerverse, sacrificing himself to trap Thanos for eternity, a new Nova has taken over defending the Earth: Sam Alexander, a quirky kid just trying to balance everything from homework and babysitting to avenging. Sam has entertained readers as Nova for the past few years in his own comic series, and he even has a recurring role in Disney’s Ultimate Spider-Man TV series.

Due to recent teasers from Marvel concerning the return of Richard Rider – the original Nova – later this fall, The Source has been wondering about the fate of present Nova, Sam Alexander, and how the two will share the current Marvel universe. But before we get into all of that, just who are these characters? Where have they been, and what have they done? More importantly, how are they different, and how can that help set them up for co-existence?

As a thirty-year-old character, Richard Rider sports a diverse and expansive comic book history, including multiple team-ups, team affiliations, heroic sacrifices, and trips back and forth from Earth to Xandar. Seriously, he is commuting constantly!

Similar to the origin of Green Lantern, Rider was given his powers and Nova membership by the dying centurion, Rhomann Dey. From then on, he fought costumed villains on Earth as Nova while hiding his true identity. Eventually, he found Dey’s ship and flew across the stars to the Nova homeworld, Xandar. There, he helped win a war against the Skrulls, but after being away from home for so long, he decided to relinquish his abilities and status as a centurion and return to Earth.

From then on, Richard Rider goes through a pretty consistent and seemingly unending cycle of losing and regaining his powers while traveling to and from Xandar. The highlights of this cycle include:

The break in this mold and the greatest hour for Richard Rider does not arrive until the ultimate destruction of Xandar and consequently the Nova Corps at the hands of Annhilus:

While traveling with the New Warriors for a reality TV show, which would inevitably led to the first superhero Civil War, Rider is called away to Xandar along with every Nova Centurion in the galaxy. However, Annihilus’ army from the Negative Zone takes Xandar by surprise, completely annihilating the entire corps except for Richard Rider, the sole survivor.

Seeking our survivors, Rider finds the Xandarian Worldmind, a lifelike super-computer which regulates the Nova Force and keeps a record of all Xandarian culture. To protect itself, it hides inside of Richard, empowering him with full access to the Nova Force when necessary. With it, he takes command of the United Front, a loose force trying to fight the invasion. After a year of war, Richard leads a small team into enemy lines to assassinate Annihilus but ends up taking the villain on alone and killing him. Even as the last Nova corps member standing, the human rocket wasted no time trying to save as many lives as possible from the evil threatening the entire universe.

Since the events of this storyline, titled “Annihilation,” Rider has gone on to fight even greater threats, including the Phalanx (robotic aliens), Skrulls (again), the Xandarian Worldmind itself, Ego the Living Planet, and of course, in his final battle, Thanos. No threat is ever too large for him to stop or at least die trying.

Above all, Rider does not fear self-sacrifice and will do whatever is necessary in the fight against homegrown and celestial evil. Even in defeat, he never gives up. As long as he has life, he will fight. Because Richard Rider is not just the Nova we want; he is the one we need.

And then there is Sam Alexander…

Fortunately, Sam’s history is less extensive and will not require nearly as much summarization. As a Nova for a new generation of readers, Sam is much younger than his predecessor. Being fifteen years-old, the character harkens back to the early days of the more relatable Peter Parker, balancing homework, heroism, and caring for his father.

At the start of his own series, Sam lives with his mother, father, and little sister in Carefree, Arizona. When he isn’t doing homework, Sam is usually trying to help his drunken father, Jesse, who claims to be a former Nova Centurion, but is presently nothing more than a janitor. By covering for his father, Sam’s schoolwork is lacking, which keeps the attention of his principal, as well as his bully, Karl.

Eventually, Sam’s entire life changes. While skateboarding around town, looking for his father, Sam accidentally falls, hitting his head. He wakes up in the hospital later, perplexed by the presence of Rocket Raccoon and Gamora. In response, the duo confirm his father’s exploits as a Nova Centurion because they need his help, or at the very least, his Nova helmet. To lend a hand and fulfill his own curiosity, Sam puts on his father’s black helmet and inevitably becomes the new Nova. With the help of Rocket and Gamora, Sam learns to harness his powers and fight.

Since then, Sam has gone on to help anyone he can across the galaxy, but especially on Earth. Despite his usually rash actions, leading him into fights without a plan, his bravery is almost unmatched. During the “AXIS” event, as Kluh – an even angrier and more powerful version of the Hulk – went on a rampage, Nova flew across the country to confront the monster by himself. Unfortunately, Sam simply enraged the beast, who punched him across the country and the Atlantic Ocean, causing Sam to eventually crash-land in Paris, France. Although he did not stop the beast, he gave it his best shot and continued to fight as Nova.

Currently, Sam is serving as an Avenger alongside other young heroes, including Ms. Marvel (Kamala Khan) and Spider-Man (Miles Morales). However, the teasers for future Marvel projects find Sam and his friends leaving the Avengers to form their own team alongside Viv Vision, the Totally Awesome Hulk, and the younger version of Cyclops. Together, these six, naive heroes will throw away the messy ideals and civil wars of their mentors to become the heroes the world needs, the Champions.

An Earth with two Novas seems to be a curious proposition; however, it is exactly what the Marvel Universe needs right now. While Nova fans are slowly warming up to Sam, the sacrifices Richard Rider made are unforgettable. Most did not hate this new Nova; they were only lamenting the loss of the old one, who can never really be replaced. With that in mind, Marvel can go down two different routes with the return of Richard Rider: partnership or complete separation.

While it seems highly unlikely, especially given the teasers for the Champions series, Marvel could partner the two novas together, at least for a little while. By working together, Sam could finally learn more about the Nova Force, the history of the Nova Corps and Xandar, making him a more effective and educated hero. It would also give Richard Rider a much needed break, as well as some time to adjust from nearly sacrificing his life to trap Thanos in the Cancerverse.

While this team-up may not please Rider fans initially, it could certainly help Sam and cement him as a needed character in the Marvel universe. Who knows? Maybe it could even set up a future storyline for the return of the Nova Corps! Never count the Novas out; they have been decimated PLENTY but always seem to survive somehow.

While it may not take full advantage of having two Earth-based Novas, separating Richard and Sam entirely could also benefit the universe. Sadly, as briefly mentioned above, Rider fans would not want to see him return to be a mentor, even for a short period of time. Perhaps Rider should stay in space, leaving the Earth under Sam’s protection with the Champions. As strange as it seems for the two characters to completely ignore each other’s existence, it could work to reestablish Richard in continuity and further Sam’s narrative with the other young heroes.

Which route do you prefer? Who is your favorite Nova? Are you excited to see Richard Rider Return? Let us know in the comments below, and don’t forget to keep checking back with The Source for more news, reviews, and editorials on all your favorite heroes and villains.