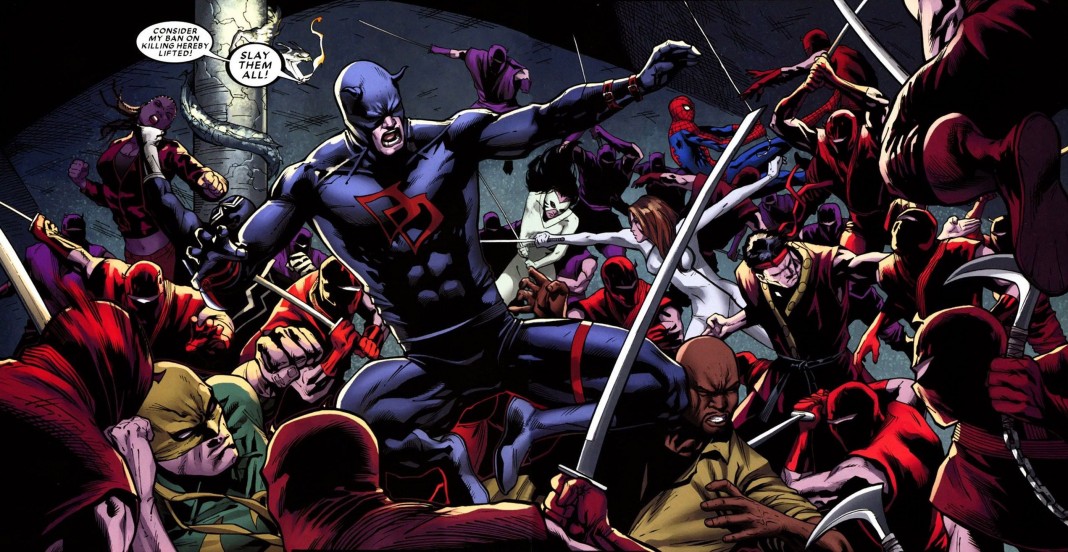 Marvel’s contemptible ninja clan debuted in the Marvel Cinematic Universe alongside the arrivals of Jon Bernthal’s Punisher and Élodie Yung’s Elektra in Daredevil Season 2. To figure out just where these hooded malcontents came from, we present to you the hidden history of the Hand in the Marvel Comic Universe.

According to various Marvel Comics, the Hand’s narrative originates centuries ago in the year 1588, when they were officially founded in Japan by their leader, Kagenobu Yoshioka. Originally, they were a group of Nationalist Samurai until they were absorbed by Snakeroot, a clan of ninjas serving a demon leader known as the Beast. In the following centuries, the Hand developed and perfected a form of stealth-based martial arts to be provided to samurai warlords and other wealthy patrons for various vile uses, such as high-profile assassinations.

Thanks to legendary writer Frank Miller, the Hand first joined the Marvel Comics continuity in Daredevil #174, when they were hired by the wealthy and powerful Kingpin to assassinate Matthew Murdock, aka Daredevil. Fortunately for the man without fear, Elektra learned of the contract to kill Matt before it was too late and saved him from an almost unavoidable death. With the help of Gladiator, a regular Daredevil villain, Elektra managed to defeat the Hand’s minimal presence in New York. Well, at least for the time being.

Since their first appearance and throughout their history, the Hand have been responsible for influencing multiple events and people throughout the Marvel Comics continuity. They’ve tangled with the likes of Spider-Man, Wolverine, Daredevil, Deadpool, the Avengers, and the X-Men, but mostly focus on Elektra, Psylocke, and their rival organization, the Chaste (represented by Daredevil’s mentor, Stick). The Chaste and the Hand have been adversaries for ages, each trying to destroy the other. In fact, when Elektra left New York as a young woman, as seen in a flashback in Daredevil #168, she began training with Stick and the rest of the Chaste. She then attempted to infiltrate the Hand, wanting to destroy them from within. As a member of the Hand, Elektra fell victim to their occult powers and tried to kill Stick (only four characters have ever been able to reverse the Hand’s hold on their minds: Elektra, Psylocke, Northstar, and Wolverine).

In the tenth episode of the first season of Netflix’s Daredevil, titled “Nelson v Murdock,” Madame Gao warns Fisk of the possible consequences of having Nobu, a Japanese ninja representing a mysterious organization, killed. Given Nobu’s training and costume during a fight with Daredevil in the ninth episode, we viewers can safely assume that the organization Nobu spoke for was presumably the Hand, especially when considering his name. As mentioned earlier, the founder of the Hand was named Kagenobu Yoshioka. Our first representative of the presumed Hand in the MCU was named Nobu, a shorter, simpler version of the founder’s name. With that connection in mind and the presence of the Hand partly established, we can analyze the importance of Gao’s message. On a rooftop, Gao warns Fisk that the “memories” and “knives” of “Nobu’s clan” are forever sharp, which begs us to wonder if the Hand’s presence in Daredevil Season 2 is a result of Fisk’s attempted rule. Will the Hand be coming to kill Fisk? Oh, you know!