Home COMICS The Three Jokers Conspiracy Theory: We Figured It Out! (Maybe/Probably) 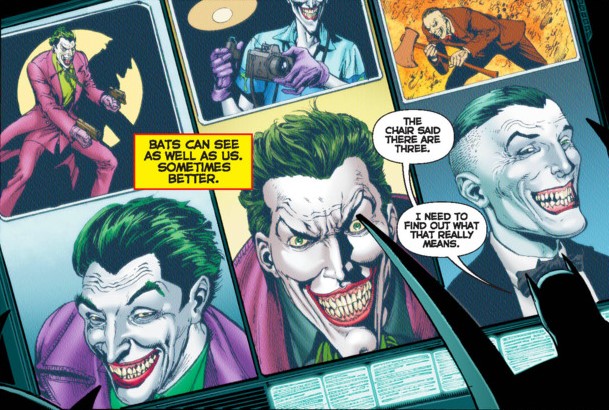 Geoff Johns demolished domes and stoked fanboy furor last year when the entire DC Universe was reborn from the Chief Creative Officer’s gaping, creative man-gina. The “Rebirth” of the DC Universe reincarnated much of what fans were missing throughout The New 52 era of the comic line.

Additionally, fans were blessed with a bevy of mysteries that had plummeted down the author’s artistic birth canal to be delivered into their loving arms. Some mysteries, such as “The Button” and “Who is Clark Kent?” would guide the comic book line during and after the first year of “Rebirth.” However, other mysteries, such as “The Three Jokers,” have been seemingly discarded as malodorous story telling-afterbirth.

Although the mystery of The Clown Prince Trinity of Crime has yet to be affectionately adopted by any author of the Bat-books, it is possible that DC has laid the foundation for answering this enigma within other recently released titles. As a result, this writer is here to endure the pangs of creative-labor to give birth to one potentially new conspiracy theory.

So, quickly push up your taped, horn-rimmed glasses, put on your aluminum foil hat, and read our new Three Jokers Conspiracy Theory before DC’s men-in-black can haul us off to Arkham Asylum for producing this preposterous proposal.

In Justice League #42, part two of Darkseid War, Geoff Johns proudly waved the ultrasound for one of the greatest misdirects in modern comic book history in the face of the readers. 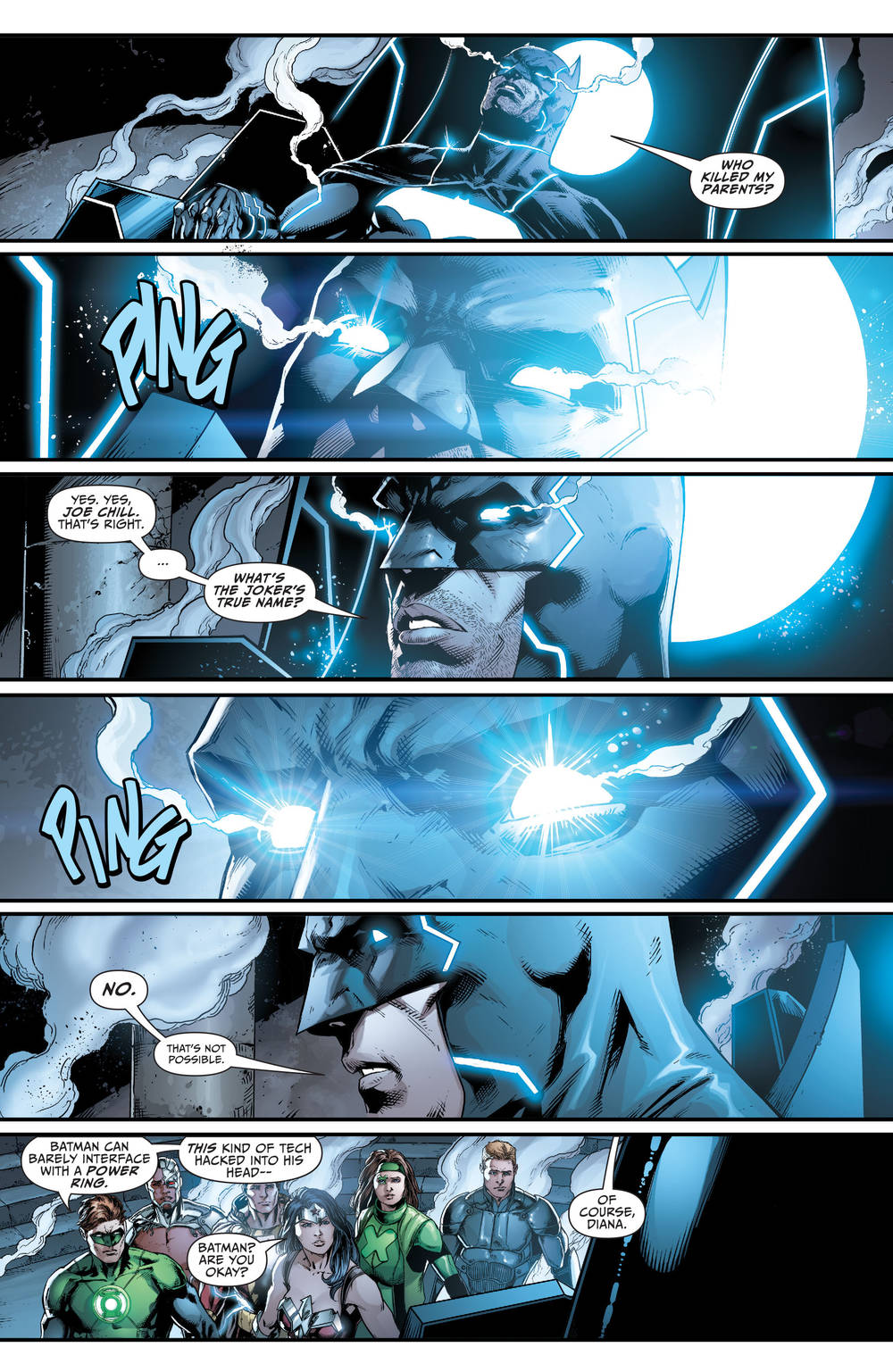 During this issue, Batman uses the newly acquired powers of the Mobius Chair to discover the true identity of the Joker. His reaction, “NO. That’s not possible.” With one simple line of dialogue, Johns reignited fanboy excitement regarding the rogue’s origin. For the answer to illicit such a response from the World’s Greatest Detective, it would also be incredibly satisfying for the audience. Readers waited with bated breath for eight more issues to discover the Joker’s true identity.

Unfortunately, the answer in Justice League #50 is not what the audience expected: There are three Jokers. 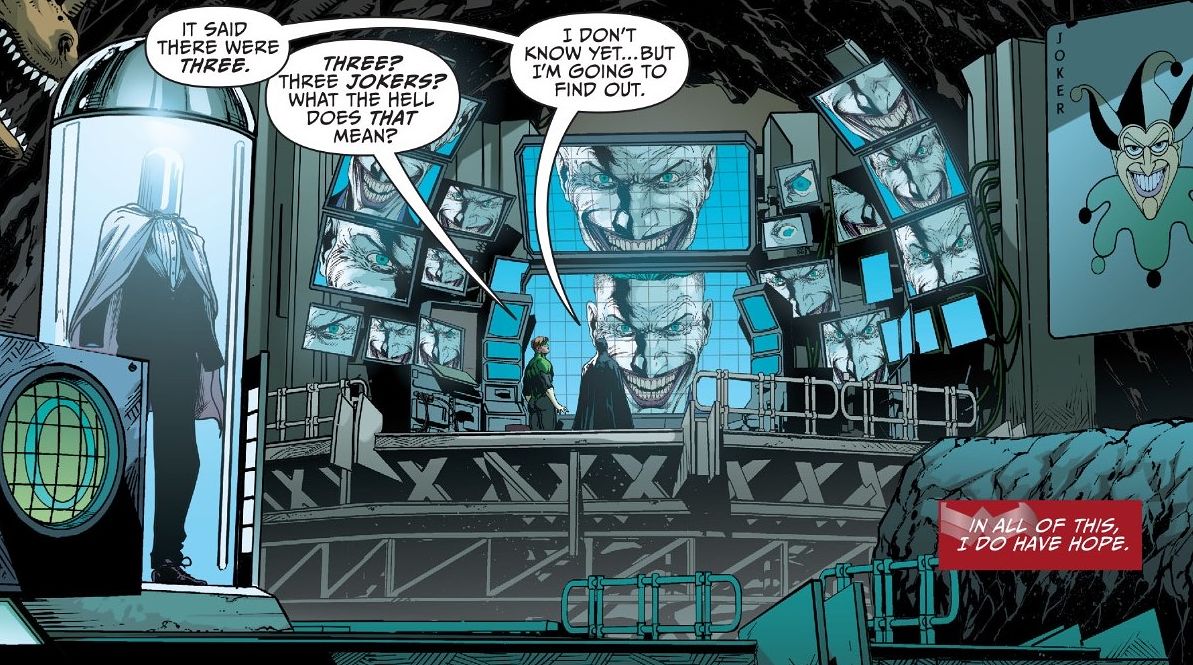 The answer is akin to two young parents going to an ultrasound to determine the baby’s gender and discovering that they’re having twin komodo dragons. The original question is answered, but there is a plethora of questions that are begging to be asked. Why are there three Jokers? Why has Batman never noticed that there are three Jokers? Does Harley Quinn know that there are three puddins? MOST IMPORTANTLY, HOW DID THE TWIN KOMODO DRAGONS GET IN THERE!?

DC Universe Rebirth #1 briefly mentions the three Jokers, accompanied by an image of each incarnation of the Clown Prince, in an attempt to establish that this mystery will continue into the new continuity of the DC Universe. As a result, readers have waited for well over nine months as this mystery gestated in their overly analytical minds. Although no writer has attempted to adopt this major plot point, I believe that the foundation for its answer has already been established by other DC Comics titles. Specifically, these titles include Superman and Action Comics.

Another character that was experiencing issues with alternate universe siblings prior to the introduction of DC Universe Rebirth #1 was Superman.

Following Convergence, two Supermen existed within the DC Comics Universe: The New 52 Superman, and the Superman from before the infamous reboot. It was only after the New 52 Superman sacrificed himself during “The Final Days of Superman” that the duplicate Superman issue resolved itself and the original Superman returned to prominence. Although the issue is ultimately resolved, many questions still remained regarding how the original Superman would fit within the new continuity. Fortunately, the answers would arrive within a year of the return of Wally West in DC Universe Rebirth #1.

At the beginning of the Superman Reborn story arc in Action Comics and Superman, Mr. Mxyzptlk kidnaps Superman’s son, Jonathan Kent, as a means of exacting revenge against Big Blue for not rescuing him from the clutches of Mr. Oz. During the rescue attempt, Mr. Mxyzptlk reveals to the Man of Steel that the two Supermen were not doppelgangers from different earths, but in fact halves of the same whole.

Currently, readers assume this split-personality to be the evil machinations of Dr. Manhattan from Watchmen. Ultimately, it is only with the power of love that Jonathan is able to save himself from the magical grasp of Mr. Mxyzptlk by reuniting the two halves of Superman into the one, all-encompassing Big Blue Boy Scout. The ultimate result, is the creation of a singular continuity using elements of both iterations of the character 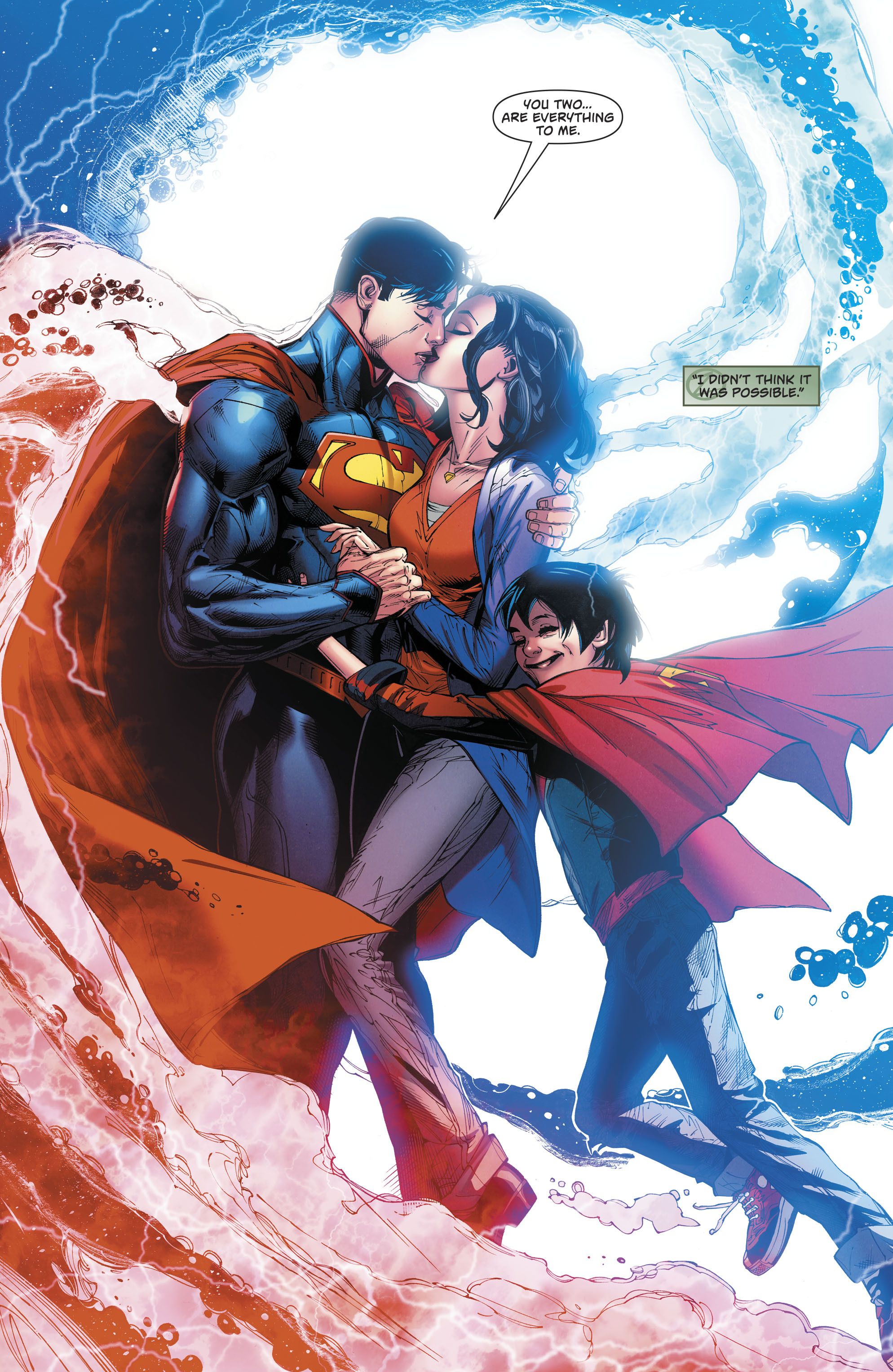 When taken at face value, receiving the news that there were three Jokers is akin to receiving the news that you’re having triplets. The punchline is that the triplets are homicidal maniacs who wear bowties, terrorize your cat, burn down your house and possess a penchant for bad one-liners. Essentially, you’re going to have identical triplets of the kid from Problem Child. 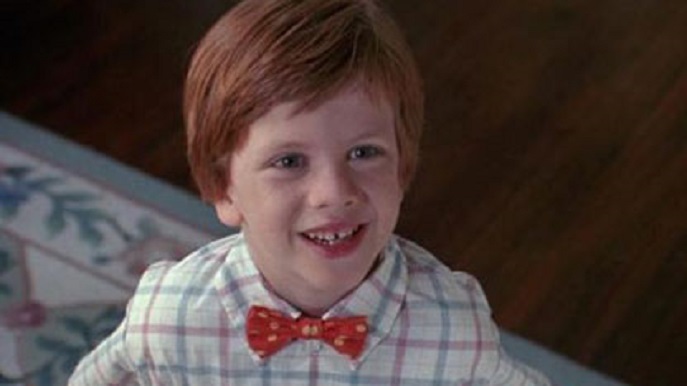 However, the recent revelations of Superman Reborn cast a new light on the mystery.

As with Superman, the Joker has been separated into three distinct personalities: Jerry Robinson’s Original Joker, The Killing Joke version of the Joker, and the New 52 incarnation of the Joker. Each of these iterations of the Clown Prince of Crime represent different facets of the character’s personality.

One can only assume that if Dr. Manhattan had split the World’s First Superhero into two, that it would be equally possible that he could split the Joker into a trinity of evil. In essence, each of these Jokers are the true Joker, because they all represent one-third of his complex personality. Credence is given to this theory when Action Comics elaborates that all of Dr. Manhattan’s actions are meant to hurt the superheroes of the DC Universe. There is no better way of hurting Batman than making him endure the pain that could only be inflicted by three Jokers.

Additionally, this resolution to the mystery is satisfying because it does not paint Batman and Harley Quinn in an unfavorable light. One must suspend his or her disbelief to accept that Batman, the World’s Greatest Detective, has never recognized that there have been three iterations of the Joker.

Moreover, it is equally unlikely that Harley Quinn would have never noticed that there were three different individuals bearing the Joker moniker. Although this could easily be explained by Harley Quinn playing along with the Clown Prince’s elaborate game, this plot point has yet to be acknowledged within the pages of her book. This theory circumvents these issues by establishing that the advent of the three jokers is new to the DC Universe.

Certainly, this theory is anti-climactic given the delectable nature of the mystery and the lack of its exploration by the Batman line of comic books. However, the lack of the direct exploration in the comic books also gives justification for this theory. The Batman line of comics does not need to explore the answer to this question when the answer has already been expounded upon in Action Comics and Superman. Given the resolution of Superman Reborn, it is entirely possible that by the end of The Button cross-over in Batman and The Flash, audiences will see the rebirth of characters that possess multiple iterations, such as Joker and Wally West, through the reunification of each variation of the characters.

Only time will tell if this is the true solution to the mystery of the three Jokers. What do you think of this theory, my fellow aluminum hat-wearing friends? Do you think that we are onto something with this assumption or do we need to be locked in a padded cell within Arkham Asylum? If you don’t agree with this assumption, what is your current theory regarding the three jokers? Sound off in the comment section below!