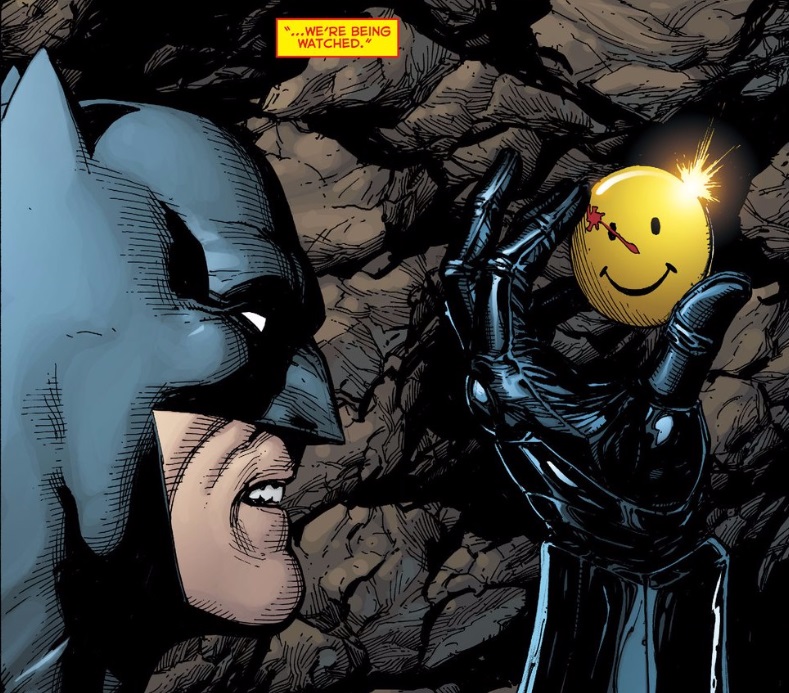 After discussing the Monster Men crossover, the various goings-on in various Bat-books, and revealing the new Batwoman series, the panel was asked a series of questions presented by fans through Twitter. The first question?

How involved will Batman and the Bat-books be in the eventual Watchmen confrontation?

The group was silent, and played it coy, with one of them asking, “There’s a Watchmen confrontation?” After the crowd chuckled politely, James Tynion IV stated, “That’s a very interesting question and you guys get to find that out.” It was dismissive, and understandably so. This “confrontation” is probably at least 6 to 12 months away, with a heck of a lot more build-up necessary to properly investigate Dr. Manhattan’s involvement and the extent of the damage done to the “timeline.” Oh, and let’s not forget the climactic bit at the end involving the collective punch-fest.

And then Batman writer Tom King chimed in.

“I think we can say…at least we can say that in Batman #9, I believe the first hint of what that huge story is starts there.”

Tynion added, “And we just saw a little flash of that story at the end of Detective #940, so there are definitely ties into Batman stuff, but…we’re not saying it’s the Watchmen. We didn’t say that, did we?”

Hmmm. Sounds like they revealed a little bit, and then immediately backtracked. So, keep your eyes peeled for Batman #9. We know Batman is currently investigating Wally West’s accusations and the Comedian’s conveniently buried button, so it’s logical Batman will be integral to deducing the identity of DC’s currently faceless, continuity-splicing criminals. Yup.