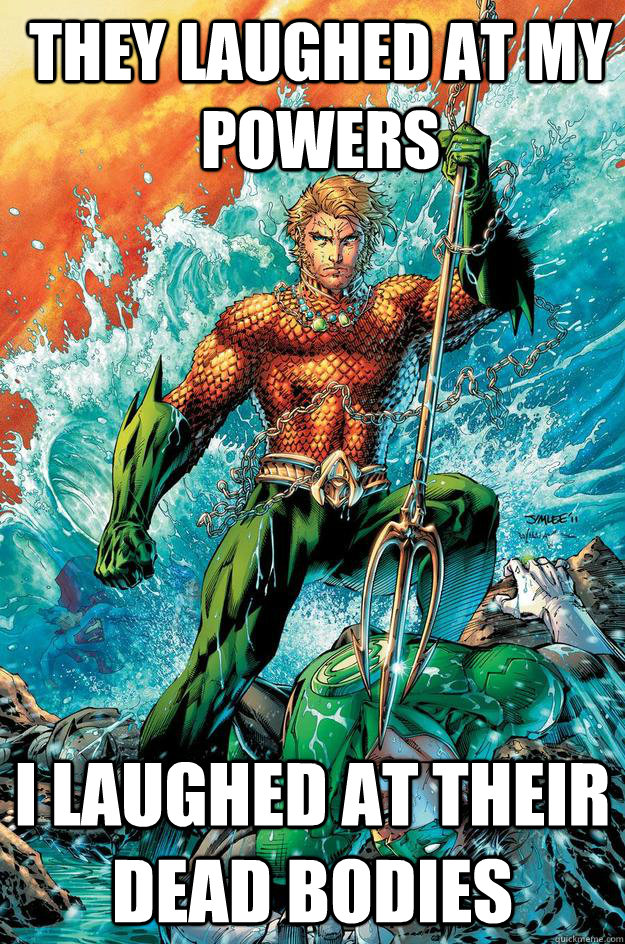 Fine—we gotta give mad props to DC for reinventing Aquaman lately to be this super-cool, ass-kicking king of the seas who doesn’t take any crap from anyone. Nobody had better cross him lest they become instant shark chow. Yes, Aquaman’s being remade into an okay-guy now, but that doesn’t erase the fact that he’s been quite a joke since…forever. Here’s a hilarious look back at the weirdest Aquaman moments in comics.

In “A Day in the Life of Aquaman”, we got a sneak peek at the secret life of “the most fabulous creature of the sea” as Aquaman enjoyed a fancy meal with his octopus butler beside him. Yes, that loyal octopus served him gourmet meals while sporting a lovely bowtie because you gotta look good for the camera).

It’s no wonder Aquaman was quick to tend to this trusty sidekick when it got injured, which prompted Arthur to change careers altogether and go by “Dr. Aquaman” so he could effectively treat his tentacled friend in his underwater shelter and clinic.

Obviously, this beloved octopus has a special place in the sea sovereign’s heart. The octopus is his undersea partner, after all—boner-pulling and everything.

During the Silver Age, Aquaman debuted with an interesting origin story. When he was a child and was left to die in Mercy Reef, a bunch of dolphins found him and raised him as one of their own. Oh, and the dolphin that was his loving mother was actually the Queen of the Dolphins, so yes, we can add Prince of the Dolphins to his undersea titles.

And while we’re on that topic, it makes total sense that Aquaman’s first love would be—what else—a dolphin. That didn’t really work out because said dolphin had another suitor (a fellow dolphin), and that kind of competition wasn’t really Aquaman’s thing, I suppose. And so, he had to part ways with his beloved Nera (the aforementioned female dolphin) to move on to other relationships with his own species. Aquaman loves dolphins so much it’s no wonder that he’d stop mid-sentence while apprehending a villain just to go save an injured dolphin in his peripheral vision. You go, Arthur Curry—no one’s judging you here.

The SUPER DC GIANT S-26 released in 1971 was a collection of old Aquaman stories that featured a quirky roster of Aquaman’s “finny friends.” We’ll never really know
if he’s actually their friend or if he’s a demanding tyrant who likes to boss these undersea creatures around like they have nothing better to do with their lives than submit to his whims. But in this supersized collection, we’ve got flying fish that launch torpedoes, octopuses that throw hand grenades and form a band for a birthday party, and swordfish that leap out of the sea to puncture a helicopter’s gas tank. Aquaman also employs a bunch of giant shrimp trained in the art of boxing to teach renegade sharks a lesson, because why the hell not?

With all the sea king’s abilities (with the talking to fish and the invulnerability and stuff), it’s hard to imagine he’d be hiding any more superpowers under his scaly sleeve. But lo and behold! He does have a secret power, and that’s the ability to inflate himself into a giant effing balloon. We kid you not.

In a particular DC Super Friends issue, Aquaman also demonstrates that he and the League have what’s called “Potty Time Power,” aiding helpless kids when it’s time to go. When the deed is done, Aquaman tells the little kid to “harness the power of water” to flush and battle germs. He then proceeds to shower the child with excess water from the tap, effectively wasting the precious liquid resource. What a magnificent feat!

Manning the seven seas and ruling over 70% of the earth can sometimes get boring, so you can’t blame Aquaman for wanting to do something else in his spare time. Aside from riding flying fish and contemplating on Magic: The Gathering (yes, he did actually consider playing the card game as it offers invaluable knowledge when it comes to defeating supervillains), Aquaman is always looking for new ventures. He certainly let his creative juices flow when he created Aqua-dolls, and magnanimously decided to donate part of his proceeds to charity by providing homes for seamen. Yup. Seamen.

Not that the “sea sleuth” needs extra income or anything. Aquaman lives quite the luxurious life by pillaging pirate booty and scouring the deep for buried treasure. He gets most of his moolah that way, but it doesn’t stop him from wanting to build lucrative seamen-related businesses. That’s a true entrepreneur right there.

So here’s hoping that none of these utterly ridiculous moments from the comics will be featured in the upcoming Justice League film, because quite honestly, Jason Momoa looks totally badass and it’s about time we cut Arthur Curry some slack. Are you excited to see Aquaman in action? What are you looking forward to the most? Sound off in the comments below!