Valiant Previews Presents Faith #2 (of 4)! That’s right; here’s a preview of Faith #2 on sale February 28th! Faith is your friend, your buddy and your pal; well, at least she wants to be. Have I mentioned she can fly? No? SHE CAN FLY! LET HER BE YOUR BUDDY!

The aforementioned preview happens to include a heck of a lot of variant covers and copious amounts of interior art!

The most talked-about new book of 2016 is just getting started!

Just as she uncovers a conspiracy in the Hollywood Hills that threatens the lives of her fellow psiots and new friends alike, Faith must also deal with the return of her ex-boyfriend and one-time teammate Torque…and a volatile new alien threat that nobody saw coming! 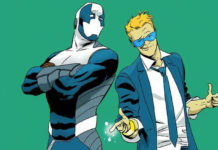