Home COMICS How X-Men: Apocalypse Can Finally Get Cyclops Right 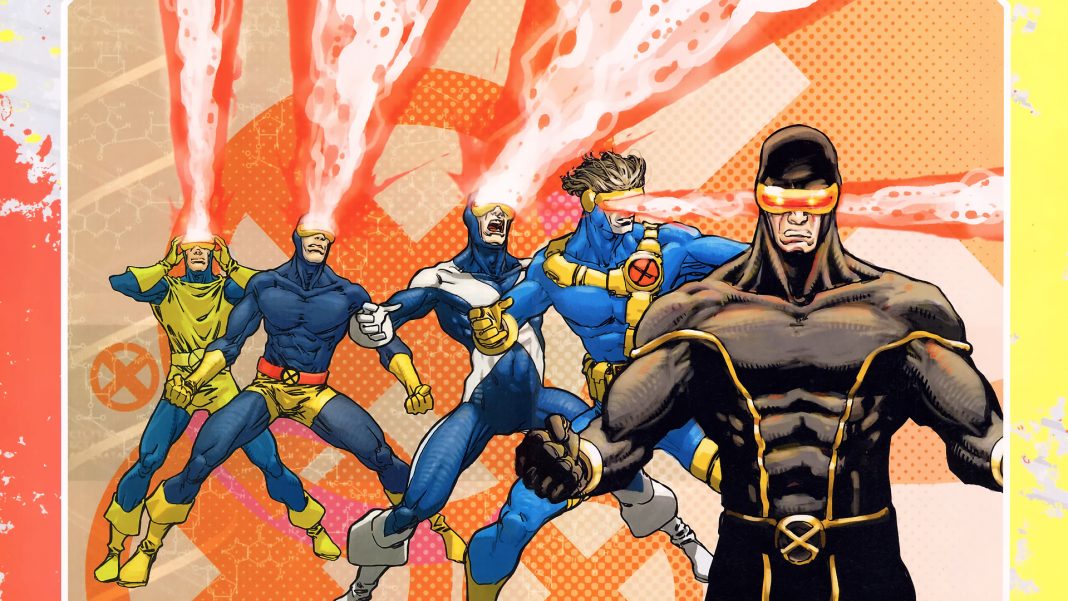 This Is How X-Men: Apocalypse Can Finally Get Cyclops Right!

There is probably no denying that Cyclops is no comic book reader’s favorite X-Man. In a school of gifted individuals who can manipulate the weather, teleport, turn their skin to steel, and read minds, a man with uncontrollable lasers coming out his eyes – which are actually optic blasts coming from a non-Einstein universe through eyes that act like portals – appears to be the loser of those with the mutant gene. When a reader dreams of being a hero or even a villain, they typically identify with raw power, such as super-strength, or useful powers, such as invisibility or flight. In Cyclops’ case, the power behind his concussive blasts is undeniable, but most people enjoy using their eyes and would prefer to live without ruby-quartz glasses. This downfall of impaired sight has kept readers from admiring him and wanting to be him for years, but that doesn’t mean he hasn’t been one of the greatest X-Men in history.

As a leader of multiple iterations of the X-Men and even his own school for mutants, Cyclops is admirable and respectable. Yet, in the original X-Men movies, X-Men, X2, and X-Men: the Last Stand, Cyclops is not portrayed in this way; he is seen as much more arrogant, annoying, inconsiderate, and even pathetic. Worst of all, he is pitifully killed off in the beginning of X-Men: the Last Stand, which left no room for improvement in his character… until now! At last, there is hope! With the arrival of X-Men: Apocalypse this week, there is a new, younger version of Cyclops played by actor Tye Sheridan. With hope in our hearts and optimism in our brains, we have compiled some of Cyclops’ finest moments from the comics to create a six-part guide on how X-Men: Apocalypse can finally get Cyclops right.

In 2004, Marvel Comics started the ongoing Astonishing X-Men series as a follow-up to Grant Morrison’s unforgettable New X-Men. The first 24 issues and one giant-sized issue were written by none other than Joss Whedon, who would go on to write and direct both Avengers films, the Avengers and Avengers: Age of Ultron. In the four storylines Whedon wrote for the series, he humanized many of the X-Men, including Cyclops himself. But in one of Cyclops’ best moments from the series, he reminded the team of his full potential, and to respect his leadership when a Sentinel appeared on their lawn. 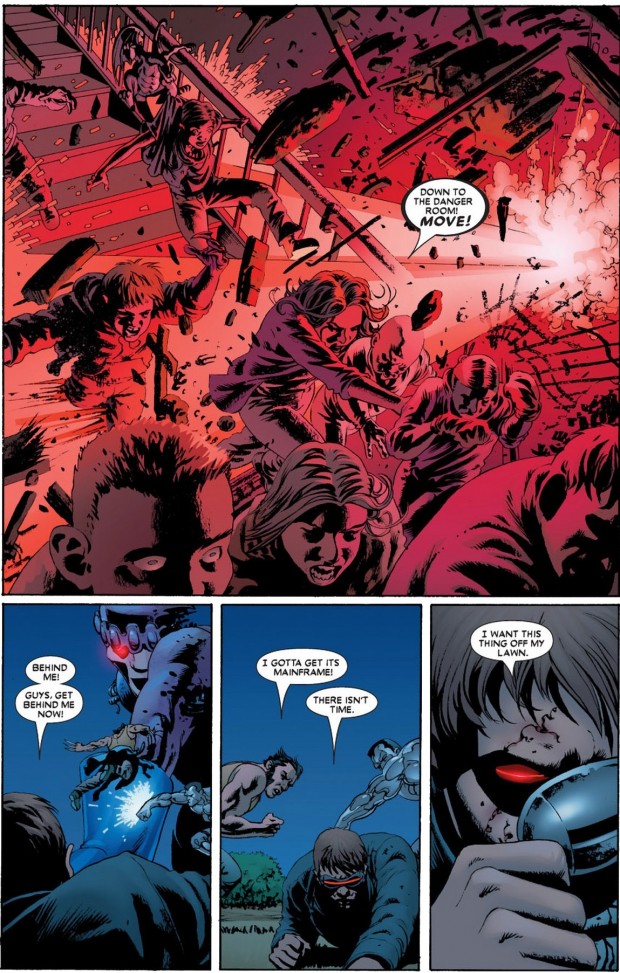 While Cyclops does not typically use that much concussive force on any of his opponents, it’s worth remembering that he can; he is much more than just a few tiny blasts of energy that’ll knock someone down. More importantly, as a writer and director, Whedon clearly shows the reader how this scene from a comic could work cinematically, and bringing this scene to the big-screen could be just what the X-Men movies need to demonstrate Scott’s full potential. If it’s good enough for Wolverine, I’m sure audiences will agree.

In recent years, the comic book world has been subject to immense crossover events. There seems to always be an event going on, or an event being built up. Whether or not you are fatigued by these crossovers, some of them have been considered widely successfully, including the more recent Avengers vs. X-Men from 2012, which saw an increase in comic book sales.

During the event, the intimidating and uncontrollable Phoenix Force returned to Earth to supposedly meld with Hope Summers, the Mutant Messiah. However, as this devastating power reappeared, the Avengers and X-Men had different ideas on how to handle it. The X-Men, led by Cyclops, wanted to protect Hope and teach her to harness her powers for the greater good. But Captain America, on the behalf of the Avengers, wanted them to hand Hope over in an effort to ensure she would never receive or have a chance to use such power. Usually, most heroes go along with what good old Captain America says, but in this circumstance, Cyclops stood defiant, unafraid to offend and disobey the respected Captain.

By not giving into Cap’s wishes, Cyclops started the inevitable war between Avengers and X-Men but also demonstrated tremendous courage and confidence in his leadership and decision-making.

3. Emotional Struggles (Both Past and Present)

Despite the spirit and tenacity it would take to lead a fight against the Avengers, Cyclops is not always so strong, which is a good thing. Almost every character needs some depth of emotion to humanize them, including Scott Summers. While the original trilogy of X-Men movies may have played too strongly on Cyclops’ assertiveness, there is a way that X-Men: Apocalypse could change all that by taking cues from Cyclops’ childhood tragedy and romantic struggles — other than Jean flirting with Wolverine.

As a child, Scott and his younger brother, Alex, lost their parents in a story so strange it could only happen in a comic book. While flying home from a family vacation in his father’s plane, an alien ship from Shi’ar Empire appeared and attacked the plane. In an act of desperation, Scott’s father, Christopher, had his mother push both Scott and Alex out of the plane with the only parachute, but the fire from the plane found its way onto the chute. Falling without salvation, Cyclops summoned his optic blasts for the first time and utilized his newfound power to slow their descent speed. Unfortunately though, the fall still took its toll on the boys, not only giving them amnesia but also damaging the part of Cyclops’ brain that could have controlled his powers. This haunting backstory could give the audience sympathy for Cyclops and humanize him in a familiar yet unique way.

Later on, in Grant Morrison’s New X-Men series, Scott found himself damaged after an encounter with Apocalypse. In the aftermath, his relationship with Jean was faint. Issues 138 and 139 of New X-Men captured all of the relationship drama as Scott attempted to deal with his weakened relationship while simultaneously starting something new with Emma Frost. Unfortunately, in the X-Men: Days of Future Past film, Emma Frost was killed off-screen; however, it could be fun to see Scott stuck in a love triangle somewhere in the future, as long as it’s not the only thing happening to his character.

In contrast to the emotional weaknesses he has, Cyclops has also demonstrated a remarkable amount of willpower and heart. In X-Factor #39, both the X-Factor and X-Men teams found themselves up against Mister Sinister. As he tore the teams apart, Alex Summers, aka Havok, did everything he could to fuel Cyclops’ rage, hoping to cause a break in Mister Sinister’s control; this was the result of Sinister conditioning Scott for years. Yet despite Alex’s efforts, nothing was more effective than seeing Jean in Sinister’s arms. In a moment of passion, rage and will, Cyclops freed his mind from all control and dealt the final, fatal blow.

An even finer example of Cyclops’ strength in will and heart came around years later during the Messiah Complex storyline. In the climax of the story, found in X-Men #207, Cyclops finally confronted Cable who was in possession of Hope, the baby savior and the first-mutant born after the House of M Event. Despite Cable’s rage, confusion, and ruthlessness, Cyclops moved in closer and closer, right in front of Cable’s gun, demanding he hand Hope over.

While this climax was a prime example of Scott’s heart and will, the entire Messiah Complex storyline was  a testament to just how far he was willing to go not only for an innocent baby, but for the mutant race as well. His overall inability to surrender would be an unmistakably valuable attribute for his character in the movies. To truly make Cyclops embrace his comic book self, willpower and heart are a necessity.

However, the traits listed above are not the only ones necessary. One of Cyclops’ most recognizable and revered aspects is his undeniable mastery of battle tactics. From all of the uncountable hours of relentless Danger Room training, Cyclops seemingly developed a sixth sense, an unrivaled sensitivity to his surroundings which has kept him formidable over the years, even against his fellow X-Men. In Uncanny X-Men #175, Mastermind tricks the other X-Men – Storm, Wolverine, Colossus, and Rogue – into thinking that Cyclops is a returned Dark Phoenix. Thankfully, every piece of Scott’s training allows him to develop an impromptu strategy to stay alive. 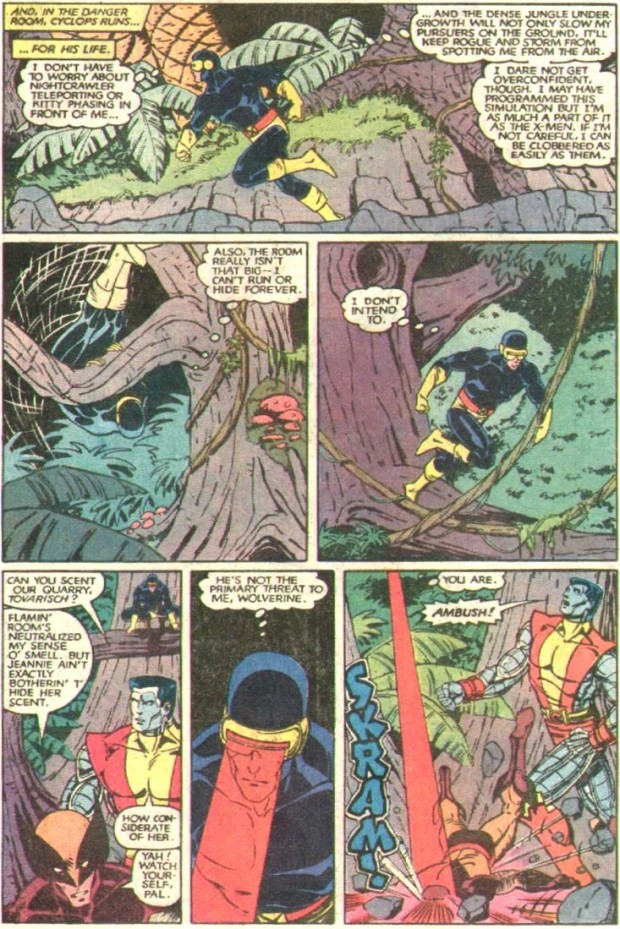 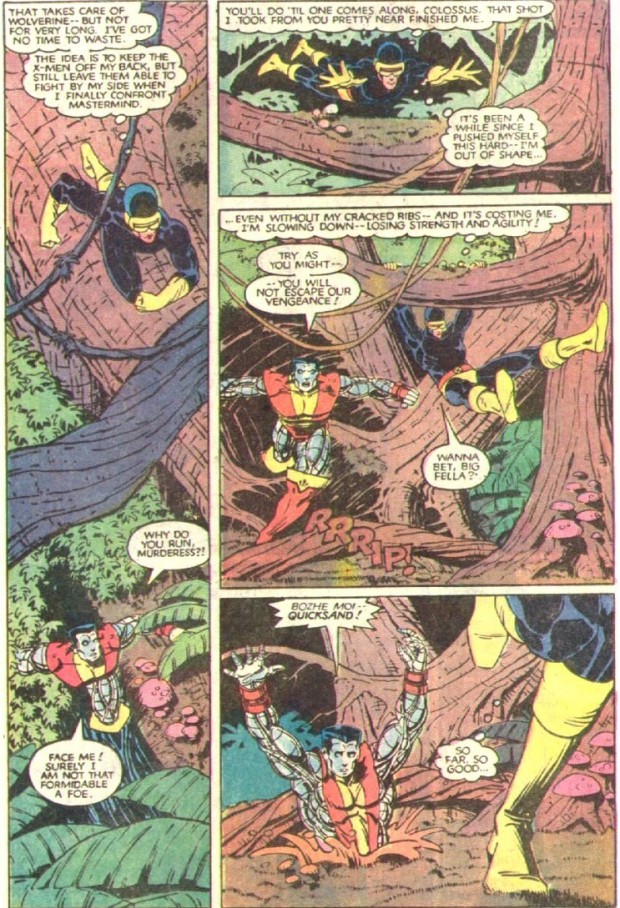 Yet, what are tactics without a team to lead? Fortunately for everyone, Cyclops’ leadership has inspired and saved the X-Men for decades. However, his idea of leadership is not for the faint of heart. In Uncanny X-Men #127, Cyclops starts a spontaneous danger room session to boost his team’s morale. In the previous comic, Proteus, a mutant with the ability to warp reality, took the X-Men for a frightening ride, making them feel powerless. To reverse this fear, Cyclops empowered them in a way all his own. 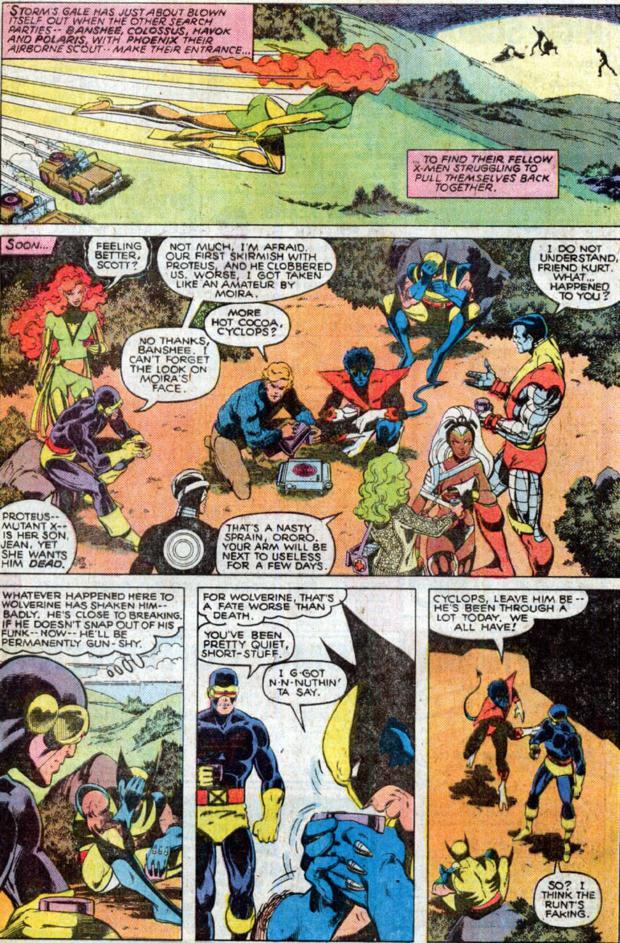 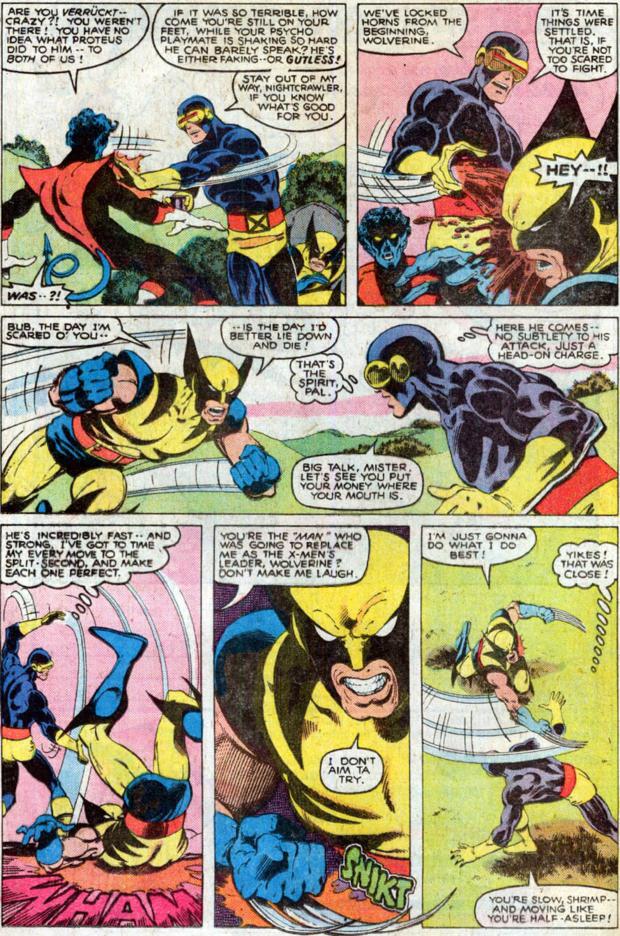 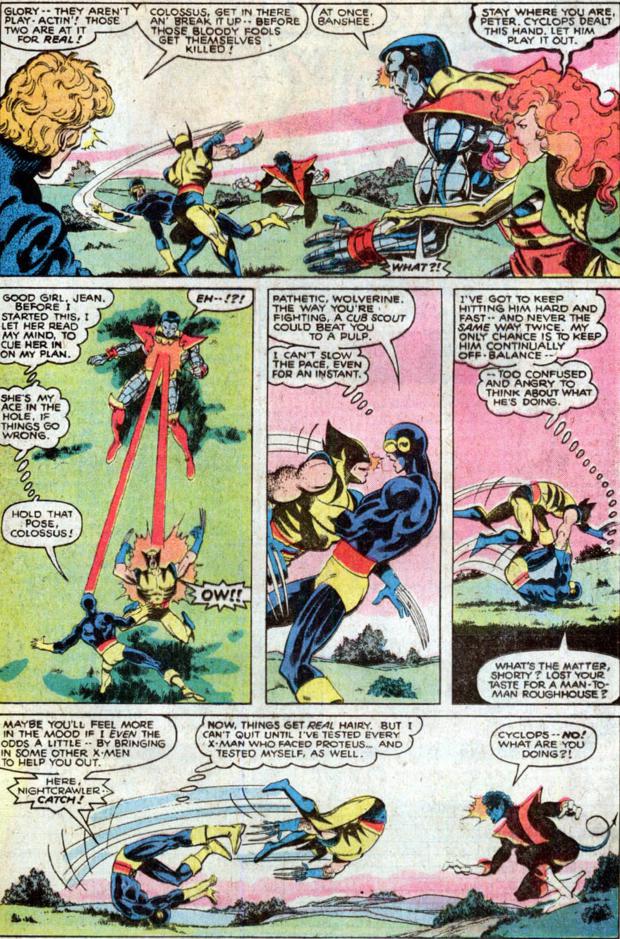 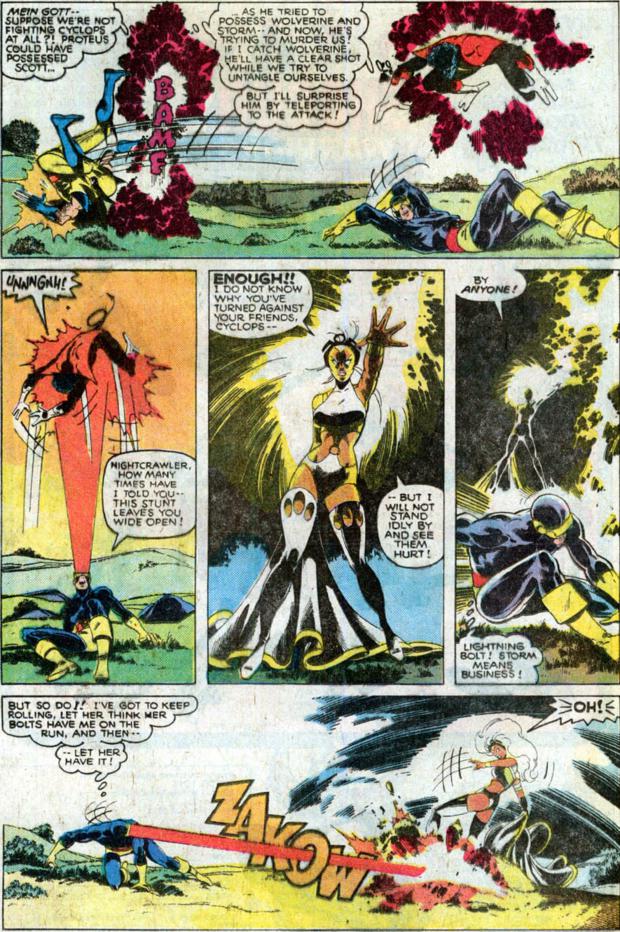 Above all, the people behind the X-Men movies – whether it’s X-Men: Apocalypse or whatever is next – must remember that Cyclops is a multi-dimensional character. He has layers; he is so much more than the Yin to Wolverine’s Yang. He may be a boy scout, but he is also a leader and a tactician who is willing to stand up for his people. Even against unbeatable odds, Scott will always possess the courage and strength to fight.

No matter what, be sure to catch Tye Sheridan as Cyclops and the rest of your favorite mutants in X-Men: Apocalypse, in theaters this Friday, May 27th.