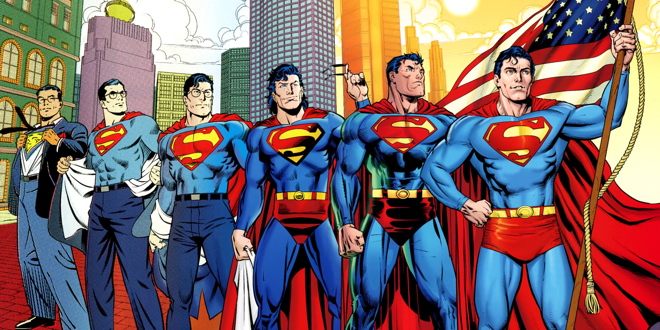 Superman changed the comic book landscape and American pop culture forever when he debuted in Action Comics # 1 back in 1938. No other superhero has had a bigger impact on the comic book world than the Man of Steel. Sure, Batman may get the glory these days, but the Last Son of Krypton’s popularity is the reason superheroes get everyone’s attention in the first place. And like the world, Superman has gone through some changes in the comic books. Like my Batman personality test, we’ll explore what your favorite version of Superman says about you.

We are going to be focusing on the comic book versions of Superman in this article, so that’s why the Max Fleischer animated version, George Reeves, Christopher Reeve, Dean Cain, Tom Welling and Henry Cavill don’t appear. Now up, up and away to the test!

Key traits: When Superman debuted in comics, he didn’t have all his powers he has today. Back then, he could “leap tall buildings in a single bound,” and “bend steel with his bare hands.” He didn’t always fight your traditional villain, either. He did fight gangsters and thieves, but he was also “a champion of the oppressed.” In his first story, Superman actually saved an innocent man from death row by breaking in to the governor’s mansion and getting him to call off the execution.

What it says about you: While you can’t take down bank robbers, you stand up for the little guy. You care for other people and make sure things are right in this world. You donate to charities or volunteer, and want to make the world, or at least your neighborhood, a better place. As another hero once said, if you see a situation heading south, you can’t ignore it.

Key traits: This is the era where the Superman mythology expanded exponentially. All the different variations of Kryptonite made their first appearances here, as well as Supergirl, Krypto the Superdog, Comet the Super-Horse, Streaky the Super-Cat, Bepo the Super-Monkey, and the Legion of Superheroes! Also, Superman gained a ton of new abilities like heat vision, super-hearing, and flight (after it was first introduced in the Max Fleischer animated shorts). Oh, and his strength increased ten-fold!

The stories took on a science fiction approach as well. Not only did the Man of Steel take on criminals, he also took on brand-new villains like Brainiac, Bizarro, Parasite, Metallo, and Kryptonite Man!

What it says about you: You are open to new ideas. Like Silver Age Batman fans, you don’t take life too seriously and always look on the bright side of things. You like seeing new faces all the time and everyone is invited to come along on whatever adventure you are going on!

Key traits: In this era, Superman went under some drastic changes thanks to writers Dennis O’Neil and Elliot S Maggin. First, Kryptonite was eradicated from Earth, thus giving Superman virtually no weakness. Also, his power level was drastically reduced, so he was closer to his Golden Age power levels, but still had some Silver Age charm. Also, Clark Kent’s day job changed from being an investigative reporter for the Daily Planet to the lead anchor for WGBS’s news broadcast.

What it says about you: You arrive fashionably late and always leave the party early. You know your limits and when it’s time to go (see “Whatever Happened to the Man of Tomorrow”). Also, you live by the philosophy that “change is always good.”

Key traits: After the continuity-rebooting series Crisis on Infinite Earths, writer/artist John Byrne came aboard and rewrote Superman’s origin. It was kind of a ‘back to basics’ approach to Superman with a few key differences: he had all his powers, but they developed over time as opposed to having them the instant he crash-landed on Earth.

Also, the Clark Kent aspect of Superman was well developed and a genuine part of him as opposed to just a character Kal-El played while undercover. However, the biggest difference was that Ma and Pa Kent were still alive to support their son while he became the world’s greatest protector.

What it says about you: You live in the moment. Sure, the past was great and you remember the good times fondly, but you also know not everything was peachy keen back then. You don’t get caught up reminiscing, you prefer to live in the present. If you were a music fan, not only do you like the Beatles, you also like Paul McCartney’s current stuff.

Key traits: Superman underwent a sort of reboot again in the ’00s, but they kept John Byrne’s continuity intact while adding some Silver Age aspects to the mythos, like Supergirl in Superman/Batman: Supergirl, Krypto the Super Dog, and new versions of Brainiac and Bizarro. He was still a mild-mannered reporter for the Daily Planet, but there was a modern sensibility to him.

What it says about you: You’re knowledgeable about history. You don’t like just one particular era of comic books, TV or music; you like ALL of it. New things don’t frighten you, and you remember your roots. You exist in a comfort zone, but you venture out of it from time to time. If you go to a restaurant, you probably order the same thing over and over again, but try something new on occasion. Basically, you like learning about the past, but also embrace the future.

Key traits: In 2011, DC Comics rebooted their entire comic line to make the characters feel fresh and new again. Superman probably underwent more changes than any DC character, with a brand-new costume (which was Kryptonian armor), a brand new-power (releasing a solar flare), a new origin, the re-death of the Kents, and a different, more agressive attitude than readers were used to.

This version didn’t seem to click with readers and was killed off in “The Final Days of Superman” arc right before DC Rebirth last year.

What it says about you: You don’t care what other people say. You are a rebel. While the rest of the world may say, “Go left,” you say, “Go right.” If someone gives you crap for liking this iteration of Superman, you drop some Dudeism wisdom on them with, “Yeah, well, you know, that’s just like your opinion, man.” What other people say doesn’t bother you at all. If you like it, that’s all that matters to you.

Key traits: Now, if we want to get technical, this is also the “Post-Crisis/late 80’s” Superman; he came back to the “main” timeline after DC’s Convergence mini-series.

However, there are some differences with this Superman since the last time we saw him (right before Flashpoint). Now, he’s a dad to a son named Jonathan and is married to Lois; they live on a farm in Hamilton County. Family is important to him.

Also, he has a new costume that looks like a blend of the classic costume with the New 52 design. If he were a movie, he’d be Star Wars: The Force Awakens — familiar, yet new at the same time.

What it says about you: You are nostalgic, but also live in the moment. Sure, it’s great thinking about the good old days, but you look towards the horizon and like creating new memories. You acknowledge the past, but realize you can’t go back.

So, that is the personality test for your favorite version of Superman. Was I spot on? Think I was way off? Let me know in the comment section below!