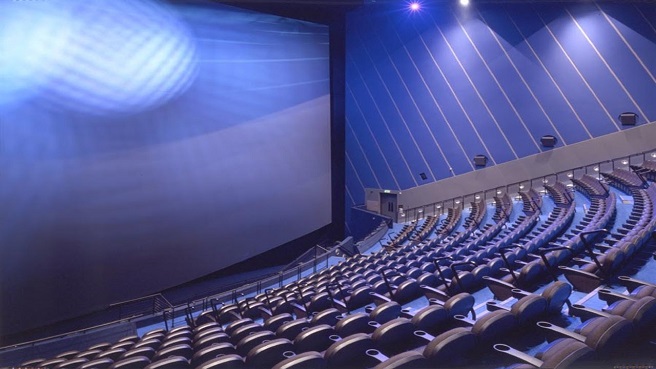 Nowadays, moviegoers have a lot of options when it comes to watching movies. You can see a movie in 2D, 3D, or be a rotten thief and download it illegally. But if you really want to see a movie, go see it in IMAX!

I personally love seeing movies when they are available in IMAX. The booming sound system as well as the massive screen draw me in immediately!

The first film I ever saw in IMAX was Spider-Man 2.

I will never forget it. It was an August afternoon in 2004 when I saw it at the IMAX theater at Jordan’s Furniture in Natick, Massachusetts. Yeah, in New England we call chocolate sprinkles “Jimmies”, police cars are “police cruisers”, water fountains are “bubblers” and have IMAX theaters in a couple furniture stores.

I already saw the movie twice in regular theaters, but never saw a movie in IMAX before. My mind was literally blown away by what I was seeing. I thought I saw the movie before, but now I was REALLY seeing the movie! That fight on the train with Spidey and Doctor Octopus near the end is incredible on the massive screen!

One of my all-time favorite movie-going experiences was seeing Superman Returns in IMAX 3D opening night. It only had select scenes in 3D so little green glasses would pop up on the bottom of the screen to let you know when to put your 3D glasses on.

To this day, it is the absolute best 3D I have ever seen in a movie, period. I believe this is because it was shown on celluloid film as opposed to digital, which is mostly the case these days in film distribution. The scene where Superman rescued the experimental space shuttle was amazing! It was like you were there with the Man of Steel!

Despite having an awesome time watching those movies, not every movie is meant to be seen in IMAX. In my Film Lovers Guide to Seeing Movies in IMAX, I will tell you when — and when NOT — to see a movie on the massive screen at an IMAX theater near you.

When to See a Movie in IMAX

1) When the movie is shot with an IMAX camera

Here’s the regular version of the airport battle in Captain America: Civil War.

Now, here is the IMAX version of the same scene. You’ll notice the scope and aspect ratio are a lot larger.

On your Blu-ray copy of this film and others mentioned above, you’ll notice the aspect ratio changes in some scenes.

The next Avengers movie, Avengers: Infinity War will actually be shot ENTIRELY with IMAX cameras! An unprecedented move by any major film studio.

A couple movie directors who have embraced the IMAX camera during filmmaking are Christopher Nolan and Michael Bay. As a matter of fact, Transformers: The Last Knight will be the first movie shot with IMAX 3D cameras.

2) The movie is specially formatted for IMAX

It will say so on the poster if the film is specifically formatted for IMAX. What that means is the movie was made with IMAX in mind and the aspect ratio for the movie in some scenes is opened up to 1:90:1. Recent films that used that technique are Doctor Strange and Guardians of the Galaxy Volume 2. Allow GOTG Vol. 2 director James Gunn to explain.

3) If the movie lends itself to the format

Now, if the movie being shown at an IMAX theater doesn’t meet the first two points, then it might be best to skip it and see it in a regular theater. However, if the movie seems like it should be seen in IMAX, then go.

For example, I saw Jurassic Park 3D in IMAX back in 2013. There was nothing special done to the movie, but it looked amazing on the big screen. The sound system used, especially when the T-Rex first appeared, made the whole theater rumble.

Same can be said for Kong: Skull Island. Even though that movie wasn’t made with IMAX in mind, it was still a thrilling movie to see on the big screen. I mean, who could turn down the opportunity to see King Kong on an IMAX screen?

When NOT to See a Movie in IMAX

Just because a movie is available in IMAX doesn’t necessarily mean you need to see it in IMAX. Sure, seeing a movie on a massive screen is tempting. However, you really don’t get the full experience compared to movies made with IMAX in mind. Here is when it might not be the best time to see a movie in IMAX.

Some theater chains, specifically AMC Theaters, have IMAX Digital. The IMAX Digital theaters are just regular theaters retrofitted to fit a slightly larger screen into the theater. They also feature a slightly better sound system, and use a smaller IMAX projector.

You aren’t really getting the full IMAX experience when you see a movie in one of these IMAX Digital theaters. I learned this the hard way back in 2011.

My dad, brother and I saw Thor in what we thought was going to be an IMAX theater. But when we arrived and walked into the theater, the screen looked A LOT smaller than what we came to expect when seeing movies at Jordan’s Furniture (which was showing something else instead of Thor). Some movie fans call this technique “LieMAX.” Look at the screen size comparison below.

“Oh waaaa, waaaa, waaaa, Keith. You watched Thor in an IMAX Digital theater. Sorry you had to see a movie with the plebs instead of a regular IMAX theater. Go back to eating your boiled goose and sipping on champagne while we enjoy the simple life.”

Now look, if IMAX Digital is your only option and you aren’t within a reasonable driving distance from an IMAX theater, then go for it. I was called “a snob to the extreme” on the IMDB message board (RIP in peace) for not liking IMAX Digital theaters. But I personally think if you run a theater and advertise that you have an IMAX theater, people should get their money’s worth. Don’t call it just IMAX like some theaters do. Call it Diet IMAX or something. And If you have IMAX Digital, don’t charge legit IMAX prices.

2) If the movie doesn’t really call for IMAX

This is the other side of a coin to another point I made earlier. As I pointed out, Jurassic Park 3D and Kong: Skull Island weren’t made with IMAX in mind, but they looked and sounded amazing in IMAX. Movies like Logan and The Mummy, to me, really don’t scream “IMAX” like say, Spider-Man: Homecoming or Transformers: The Last Knight.

I hope this article is helpful the next time you are thinking of seeing a movie in IMAX. Agree with me regarding IMAX Digital? Think I need to cut them a break? Let me know in the comment section below!