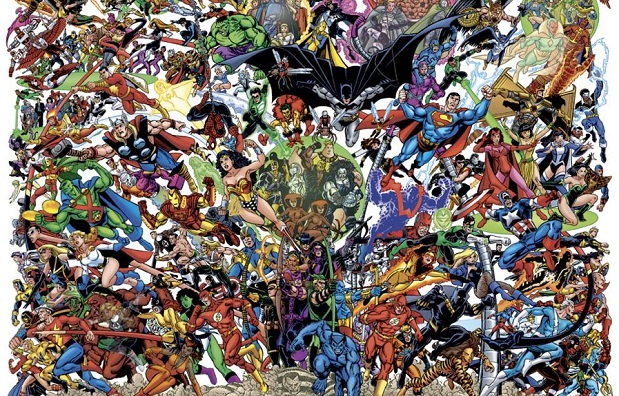 What I am about to ask may come off as odd since I write for a comic book-based website. However, it needs to be asked:

Are we at the saturation point for comic book entertainment?

Look, don’t get me wrong — I still like comic books, movies and shows. I just think there’s too much of it now in pop culture. Let’s look at the evidence. This year alone we have eight comic book movies hitting the big screen including Black Panther, Aquaman, Avengers: Infinity War and Spider-Man: Into the Spider-Verse. On the TV front, we have practically half of the CW lineup with Black Lightning, Legends of Tomorrow, The Flash, Supergirl, Riverdale and Arrow. On Fox we have Gotham, The Gifted and Lucifer. ABC has Agents of SHIELD while FX has Legion. And I realize I’m missing a few shows.

It has become too much for me. Sure, some may say we’re living in the golden age of geekdom. But like the great Barry White said, “Too much of anything is no good for you, baby.” I quit Legends of Tomorrow this year after the season premiere. The show just doesn’t click with me. I gave The Gifted a few episodes before I settled on a verdict and I found the show to be the same plot over and over again.

As for Arrow, I am ready to say “vaya con dios” to Star City. The show went from actually being about the Green Arrow to being about him and his super friends –  a show that, frankly, I don’t care about. Sure, he had the Black Canary, Speedy and Diggle in the beginning, but now we have Mr. Terrific, a new Black Canary and Wild Dog. And like The Gifted, Arrow seems to have the same plot each and every week: trying to capture Cayden James (Michael Emerson) after he narrowly escapes. Again.

As for the movies, I’m more choosey about what I see in theaters. Honestly, Black Panther, Aquaman, and the now delayed New Mutants don’t interest me, so I will skip them. With the frequency that comic-based movies hit theaters, they now feel like obligations rather than something to look forward to.

Looking back, I may have been forcing my anticipation with some movies like Thor: Ragnarok and even Justice League. Both came out after a summer filled with Guardians of the Galaxy Volume 2, Wonder Woman, Spider-Man: Homecoming, and The Defenders on Netflix. I think I convinced myself Justice League was a better film than it actually is. The reshoots are pretty obvious now when you watch it, like the scene when Bruce meets Aquaman (keep an eye on Ben Affleck’s hair), and any scene with forced humor in it.

Let’s compare 2018 to 2007. Smallville was the only comic book TV show. Remember how many comic book movies hit the big screen that year? Three: Ghost Rider (what’s up, Nic Cage?), Spider-Man 3 and Fantastic Four: Rise of the Silver Surfer.

That’s right, young kiddos — there was a time when your local cinema wasn’t playing a comic book movie. Imagine that. Going to a theater with nary a Marvel or DC movie on the marquee! But guess what? We persevered. We survived. And most importantly, we were actually excited about the comic book movies that came out.

Anyone reading this is probably thinking, “Nobody is forcing you to watch these things.” You’re right. But when you constantly see it everywhere you go, it gets on your nerves after a while. Having an ice cream sundae is great once in a while, but if you had it every single day for dessert you’d get sick of it. And diabetes.

Maybe I am just getting older, but when it comes to the onslaught of comic book related entertainment on the horizon, I think of a certain quote from the old Warner Brothers cartoon I Love to Singa.