Batman V Superman: Dawn of Justice is but a few short weeks away and during the 88th Academy Awards, a reporter caught up with the Man of Steel himself, Henry Cavill. Presenting an award at the prestigious event, Henry Cavill finally weighed in on his thoughts on who would win in a fight between Batman and Superman. His answer may SHOCK and BEWILDER you…nah, I’m just kidding. He answered how you might expect! “He has all the powers. And Superman can’t help but love everyone and wants to do the right thing [and]…you know you have the right guy advising you,” said Henry Cavill. Who would’ve thought the guy playing Superman would have said Superman would win! Ugh. I need to dial the sarcasm back.

Having seen the movie twice, Superman actor Henry Cavill said, “Epic, thrilling and visually spectacular.” Well that’s certainly direct and to the point, isn’t it? Perhaps somebody got good ol’ Henry a thesaurus as a gift! Joking aside, Batman V Superman: Dawn of Justice has already raked in a great amount of presales and there has been a tremendous deal of positive hype surrounding the film with particular note being paid towards Ben Affleck’s performance as Batman. I guess that makes sense considering he’s already lined up for a solo Batman film! 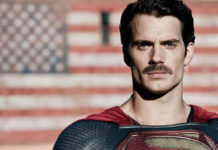