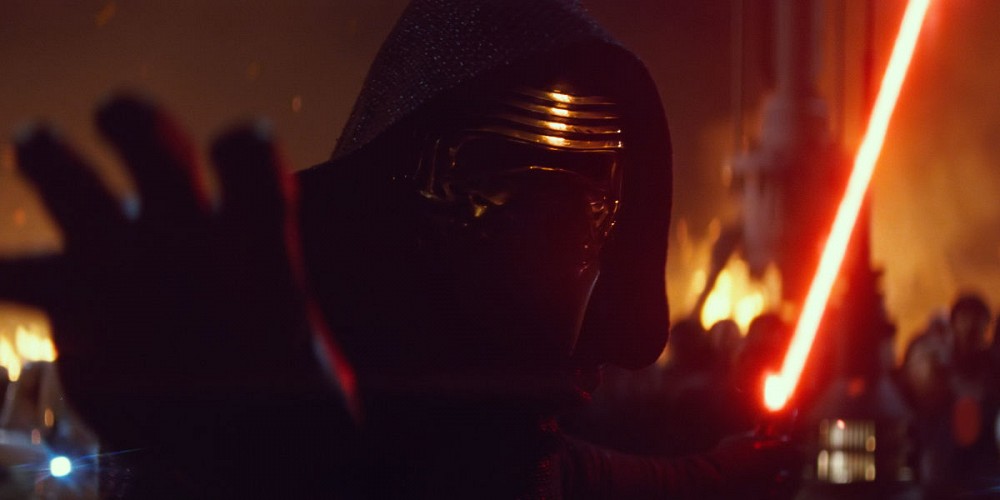 Listen. I don’t care if the headline of this article is a spoiler. It’s been close to a year since Episode VII: The Force Awakens was released and we need to discuss the most important part of the movie, the moment when everyone’s favorite smuggler Han Solo met his fate and was cut down by his own son, Ben… a.k.a Kylo Ren.

It was the most emotional scene in the movie. When Solo and Chewbacca first turned up halfway through the movie, it was like being reunited with old friends. There were jokes, fights, tons of feeling bad about things and even a trip to an alien-filled cantina. It was like they never left.

Then came the moment on Starkiller Base. While setting charges to destroy the planet’s generator and cause the whole things to collapse in on itself, Solo decides to reach out to his son one final time and try to convince Ben to come home with him. Clearly, the young Solo was considering his options. Then, a blast of red as his lightsaber punched a hole right through his father’s chest. Han fell off the bridge they were standing on, and into the darkness below. Kylo Ren finally accepted his complete path to the dark side… by killing his father.

Anyone who didn’t shed a tear in this scene is a liar. The buildup of emotions, filled with the bond between father and son, led to a moment that will be lodged into Star Wars fans minds for years to come. But what about the mess that was going on in the mind of Kylo Ren? Well, talking to USA Today, TFA director J.J. Abrams finally spoke out regarding the inner struggle Ren experienced before deciding to murder his father.

“People have asked me if I think that Kylo Ren was just playing with him the whole time, if he meant to kill him from the beginning. And the truth is, I think Kylo Ren, in this moment, is actually being convinced to walk away from this. Snoke is, as Han says, using him, and I think that somewhere Ben knows this. But I think that he can’t accept it. Deep down, he has gone too far.“

It was traumatizing to see Han Solo cut down like that. However, this scene perfectly conveyed the struggle going through Ben’s mind. But… the whole scene shouldn’t have been that shocking to fans. According to Abrams, this is something we should have seen coming all along.

“Obviously any time two characters in Star Wars go out on an incredibly thin bridge 10 miles above the ground with no railings, it’s not going to end well with one of them.“

The arc of Ben “Kylo Ren” Solo is going to be a interesting journey in the upcoming Star Wars movies. Knowing he is conflicted in his decision to choose the dark over the light (and if he’ll switch sides eventually) is one of the most anticipated storylines coming in Episode VIII. It’ll be interesting to see how the grief of killing his own father will play into the story. Will it be the breaking point that turns him back to the light side for forgiveness? Or, will it send him in a downward spiral towards the anger and hate we saw overtake his grandfather, Anakin Skywalker?

Either way, his fate is now in the hands of Rian Johnson, who now holds the reins of Episode VIII in his hands. Abrams got the ball rolling, and in the process gave us an image that will last a lifetime in Star Wars lore.

Where will the path of Kylo Ren go from here? We’re not finding out until December 15, 2017 (bummer)… or at least until the first trailer is officially released (hopefully soon!!!).