Last night, an encore presentation of Rifftrax’s latest live event was broadcast across theaters with a riffing of the 1962 horror movie Carnival of Souls. Did the movie hold up? Was the point of a short shown before the movie even made?

If you aren’t familiar with Rifftrax, it is a group of guys (Michael J Nelson, Bill Corbett and Kevin Murphy) making fun of a movie as it plays on a screen. This was their 22nd live event so far and the fourth of the year (Time Chasers, the Mystery Science Theater 3000 reunion and Mothra riffs came before this).

Murphy, Nelson and Corbett kicked things off with riffing on an educational short from Encyclopedia Britannica called The Dirt Witch Cleans Up. In this bizarre short is a witch who wants the whole world to get dirty, and not in the way Christina Aguilera wanted to in 2002.

Despite her best efforts to make the world filthy, the witch winds up getting scrubbed clean by a little girl who gives her a bath. As the witch gets cleaned, so does the whole world.

After this and a riffing of another short from ACI Films called Masks of Grass, we were on to the feature presentation of Carnival of Souls. In the truly confusing horror movie, a young church organist (Candace Hilligoss) moves to Utah after a car accident on a bridge. As soon as she moves to the beehive state, she gets stalked by this dead zombie who appears sporadically throughout the movie. Thinking she’s going insane, she is drawn to this abandoned carnival.

Overall, this was another good live event. Corbett, Nelson and Murphy were funny as usual. While the movie (surprisingly in the Criterion Collection) had some dull moments, their jokes pleasantly filled in that gap. The weird and bizarre nature of Carnival of Souls really lent itself to being riffed. I don’t know if I could watch something like this without Rifftrax providing humorous commentary.

If this was your first live Rifftrax experience, I’d definitely recommend watching their live riffs of Plan 9 From Outer Space, Night of the Living Dead and Manos: Hands of Fate.

Their next live event will be a double feature of their live riff from 2013, Santa Claus Conquers the Martians, and their Christmas Shorts-travaganza event from 2009 featuring Weird Al Yankovic. 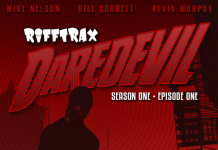