What if your favorite Star Wars characters lived HERE AND NOW, and not in some far away galaxy during some romantically ambiguous time in history. What if Princess Leia, Luke Skywalker, Han Solo and Darth Vader were here on planet Earth, torn from their great galactic struggle and subjected to the banality of speed dating, returning/exchanging merchandise, or trying to sell ‘The Force’ as an App to a roomful of disenchanted, corporate board members?? Well, our friends at Mode not only asked those questions, they produced a video showing how those interactions might appear if Star Wars characters lived among us! Check out the video below!

1. It’s Princess Leia attempting to return merchandise WITHOUT A RECEIPT! The female employee won’t budge, but after Leia speaks with the Manager, entreating him with a desperate, “Help me, Marcus. You’re my only hope,” the Rebel Princess successfully unloads her ill-bought, unwanted swag.

2. It’s Luke. Speed-Dating. Unfortunately, he’s had some experiences where his romantic interests turn shockingly familial, so he has to be careful and somewhat inquisitive. How inquisitive? Well, to be sure, he needs to ask each prospective girlfriend if they are, in fact, his sister. Yup.

3. It’s Han Solo; he’s at a bar and decided to drink shots before the arrival of Lando Calrissian. This was a serious breach of ‘bro-code’, seeing as Lando’s currently celebrating his birthday. Of course, Han wasn’t the only one imbibing early; Greedo was also guilty of ‘taking a shot first.’ And yes, this lead to an argument over who actually ‘took a shot first’, Greedo or Han. Hmmm. Clever.

4. It’s Obi-Wan Kenobi, and as a psychologist he uses The Force to allay your innermost fears and….make you more amenable to paying higher hourly rates.

5. It’s the Emperor. Electrifying ‘Force-Hands’ will ALWAYS get him out of a ticket. ALWAYS!

6. It’s Darth Vader, and he’s trying to sell his latest App dubbed ‘The Force.’ Yes, there are currently other Apps that already do what ‘The Force’ does, but…uh…don’t tell Vader that. 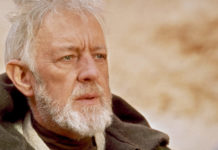