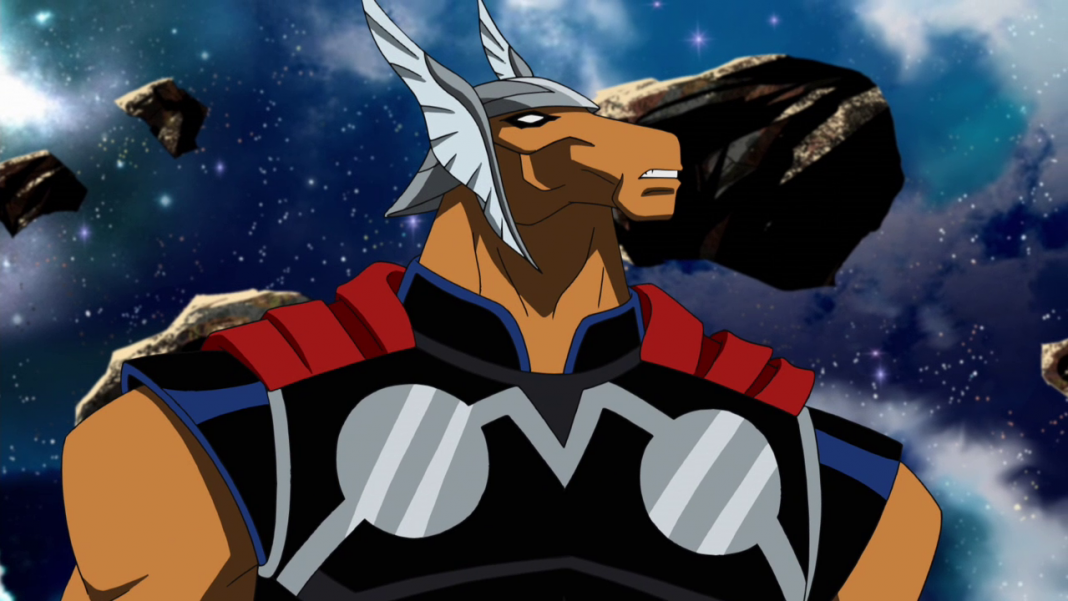 Rocket Raccoon meet Rocky Balboa. It appears one of Hollywood’s most iconic actors is about to take a trip to outer space since Sly Stallone might appear in Guardians Vol. 2.

Do you know what this is? This is the recently Oscar-nominated Sylvester Stallone leaving the set of Guardians of the Galaxy Vol. 2. Is that a script in his hand… it sure looks like it. Did he put on Instagram that his visit in Atlanta (where filming is taking place) was “very inspiring” and that “there’s much more to follow”? He sure did. Did you even know Stallone had his own Instagram page? I sure didn’t.

All signs point to a Sylvester Stallone appearance in the Guardians of the Galaxy sequel. This would be another amazing coup for the franchise, after already having Glenn Close, Benicio Del Toro, John C. Reilly, Josh Brolin and now Kurt Russell in supporting roles. The timing for Stallone coming on board couldn’t be any more perfect. He’s coming off an amazing performance as Rocky in Creed and would be able to bring the same emotion/comedic moments from “Rocky VII” into the Guardians world.

But let’s be honest; most people don’t care that Sylvester Stallone will be in Guardians of the Galaxy Vol. 2. What do they care about? Who he could be playing. So, let the rumor swirling begin with three people I think Stallone could play in the upcoming GOTG sequel.

Who Could Sylvester Stallone Be Playing?

We know the identity of Star Lord’s father will be revealed in Vol. 2. After a quick mention of Peter Quill’s dad at the end of the first Guardians, it was clear a sequel would expand on Star Lord’s lineage. Many assumed the casting of Kurt Russell solved that mystery, but now a little cloud of doubt is starting to appear with a potential Stallone casting.

Stallone would be perfect as a father figure to Quill. It was practically the role he played in Creed to Michael B. Jordan, and I’m sure he could capture that same father-son relationship with Chris Pratt. Also, should the character turn out to be “J’son of Spartax” (Star Lord’s father in the comics… who James Gunn said won’t be in the film)… Sylvester would easily pass off as a aging intergalactic warrior.

As for Kurt Russell… I did previously mention another perfect character for him.

Wishful thinking? Maybe. Completely out of the realm of possibility? Not at all. In fact, Director James Gunn had previously expressed an affinity for the character. Easter Egg hunters thought a B-R-B cameo could had been found in The Collector’s warehouse, but Gunn squashed those rumors. But who needs a cameo, when you can bring the character to life in the sequel?

And if you’re going to bring a fan favorite like Beta Ray Bill into the fold, why not let Sylvester Stallone take on the role. An alien like Bill will most likely have to be motion capture, meaning Stallone wouldn’t even have to physically play the character… he could just be the voice (like Bradley Cooper and Rocket). Or if he wants to get involved with the movements, let him do it (like Vin Diesel and Groot). Stallone’s voice alone would make Beta Ray a menacing figure in the Galaxy and a strong ally for the Guardians.

Plus, bringing Beta Ray Bill into the MCU means he can have a cameo in Thor: Ragnarok where he can fulfill his destiny by being worthy of the power of Thor.

Well, let’s be honest here; there is a character rumored to be appearing in GOTG Vol. 2 that is going to need a booming voice, and that character could very well be EGO: The Living Planet. Any anthropomorphic celestial is going to need a deep baritone voice, and Sylvester Stallone fits that bill. So it makes sense that you bring a star as big as Stallone on board to bring a larger than life character to the silver screen.

James Gunn seems to have no problem taking a minor role and handing it over to an Oscar nominated actor (Hello Glenn Glose). He also like to take blockbuster movie stars (Cooper and Diesel) and put them behind CGI characters. In the end, Gunn’s vision always seems to work. So, if it’s James Gunn’s intentions to have Sylvester Stallone voice a massive talking planet, so be it. It won’t stop me from showing up opening night.

So who do YOU think Stallone should play in Guardians of the Galaxy Vol. 2? Are there any other alien/humanoid characters that he’d be perfect for? Let us know below.