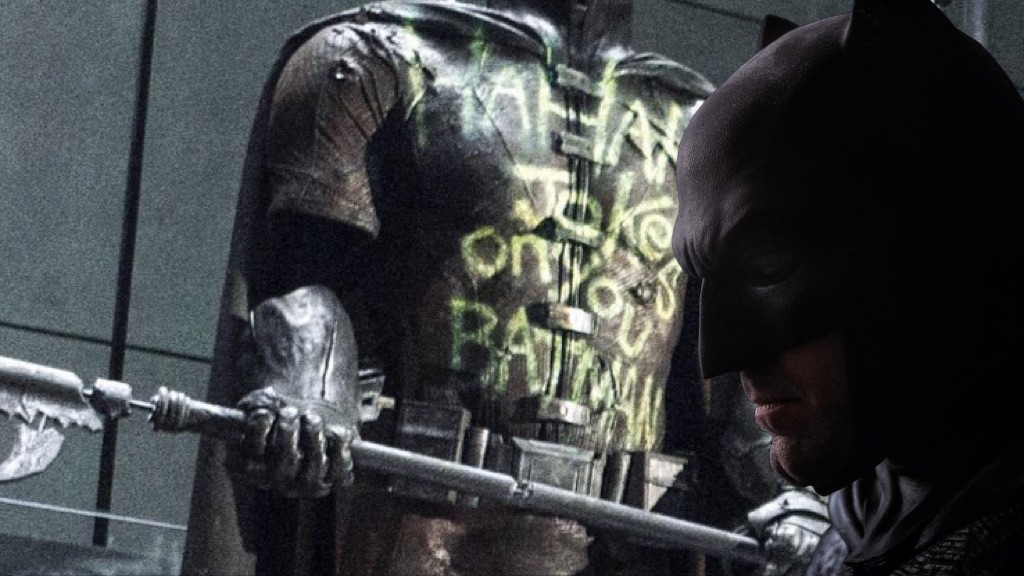 Now that Batman v Superman has been in theaters for two months now, I think it’s time to address the elephant in the room for a lot of people. The truth of the matter is yes, Batman does indeed kill in Dawn of Justice but, has he always been like this or did he only begin to break his rule after Superman showed up? Before we get into it, I’d just like to clarify that this isn’t the first time we’ve seen a cinematic Batman kill on screen. Both Keaton and Bale’s version of the brooding Caped Crusader have killed multiple people, so having a Batman who’s okay with a few people getting offed isn’t anything new. However, we’re not here to defend Batman’s killings, we’re here to answer the following question: were Batman and Robin killers before Batman v Superman? In short, yeah, it seems that way….but I’m not completely convinced.

If we take a closer look at Robin’s shrine in the Batcave, it’s clear that his staff has been modified with sharp knives. I mean, you try swinging this thing around without brutally hurting someone.

From the comics we know that Tim Drake – the 3rd Robin – is known for using a bo staff, but because the Joker killed this Robin in the DCEU, our DC comic book history tells us Jason Todd – the 2nd Robin – is most assuredly the victim here. And Jason was always more reckless and violent than the other Robins, so having him be the one whom this suit belongs to makes the most sense.

For me, it’s just hard to wrap my brain around the possibility of Batman recruiting young children to help him beat people to death. No version of Batman should ever do that. The other theory that’s floating around is that the staff was modified by Joker, who then beat Robin to death with the finished product. There are puncture wounds in the suit, but most of them resemble bullet holes. It would make sense, and would fit the Joker’s personality for him to use the non-lethal weapon Batman gave Robin to kill him with it. Again, this is all speculation. One last thing to note before we move on is a quote from Bruce Wayne in Batman v Superman that pretty much hints at the fact of him always being a killer.

Speaking of criminals, if Batman and Robin TRULY were killers, why are people like The Joker, Killer Croc, Deadshot and others still alive? It’s a tougher question to answer, honestly. If you look at the way Batman was in the movie, you’d think that he’d have no problem ridding scum like Joker from the face of the Earth, right? Maybe he has sympathy for him?

The only logical explanation is that he hasn’t always been a killer. If he was, his rogues gallery would be a thing of the past. The Batman we saw in Dawn of Justice was at the end of his rope. He didn’t care about the rules, and who knows what happened to him before the events of the movie. The Killing Joke could’ve just taken place in the DCEU, or maybe Talia al Ghul died. There are so many reasons as to why the Dark Knight was so brutal in his methods during Batman v Superman.

Alfred even states that it looks like he has “new rules” when it comes to taking down criminals. Even the cops were surprised Batman branded that guy in the warehouse. What’s relieving to note is that Batman most likely won’t be a killer anymore going forward in the DC Extended Universe. Why, you ask? Well, allow me show you. We saw Batman mow people down like tall grass with the Batmobile’s guns in Batman v Superman, but if you take a look at the Bat’s vehicle in the latest Suicide Squad trailer, you’ll notice they’re missing.

Notice how Batman’s taken them off? Now I bet some of you are wondering: why would he remove them after killing so many people in the movie? I have a one word answer for you: Superman. Now the reason I mention the Man of Steel is this: *SPOILERS FOR THE END OF BATMAN  V SUPERMAN* At Superman’s funeral, Bruce says a line that I think a lot of people look over:

“I failed him in life, I won’t fail him in death.”

This line tells me that Superman, through his actions, reminded Batman what it meant to be a hero. Sure, Superman had his flaws, but in the end he sacrificed himself for an entire planet. That did something to Bruce personally. This alien that he’s wanted dead for so long sacrificed himself so that Bruce, Diana, Lois, and countless others could live to see another day. An act like that would melt even the coldest of hearts. So what I think happened, was that Batman went back to his old ways. He took the guns off his vehicle and swore that he would never go down that dark path again.

For those of you who don’t know, Jason Todd was resurrected in the comics and became a ruthless vigilante known as the Red Hood. The story Under the Red Hood is a very popular one that Bat fans (including me) are aching to see on the big screen. Unfortunately, due to Batman’s murderous actions in Dawn of Justice, some believe this story can no longer be adapted by the DCEU. The main reason as to why Jason is so mad at Batman is that after he was killed, Batman didn’t kill the Joker. And now that it’s possible the Caped Crusader isn’t a murderer anymore, you can still have that iconic scene in the apartment between Batman, Jason, and Joker.

While there are some fans that didn’t have a problem with Batman’s killing in Batman v Superman, there are plenty of other people who believe that Batman should never walk down that path. Me, I’m indifferent when it comes to this situation; I understand both sides. Where do you stand? Would you like to see Batman continue to kill in the DCEU, or would you like to see him take on his comic book rule of no killing? Let us know in the comments section below!