Home MOVIES What’s up with That Robin Suit? 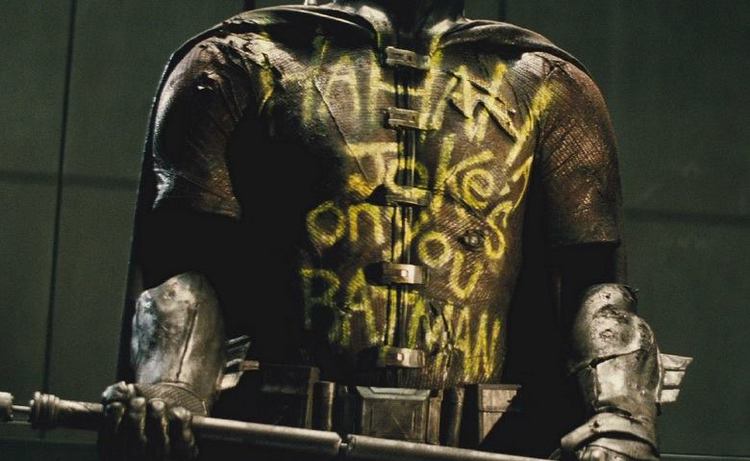 Batman V Superman: Dawn of Justice really looks to be setting the groundwork for the DC Expanded Universe, which entails both the TV and movie worlds. However, many questions have arisen from that image we have of the Batfleck looking sorrowfully on a Joker-corrupted Robin outfit. Astute Bat Fans might point to an early version of Robin from the comics, Jason Todd, as the likely answer but we won’t be getting that answer till after Batman V Superman: Dawn of Justice! “We’ll be exploring that. No one says specifically the name of which Robin that is,” stated Geoff Johns, one of the major creative forces over at DC. “You can extrapolate that if Batman kept his suit like that, it’s a reminder. He’s displayed the suit of a fallen ally, fallen friend in the center of the Batcave. It’s right there for a reason, and part of it is to fuel him to continue to do what he does.”

Naturally, it would be assumed that Ben Affleck’s solo Batfilm might go over that interesting string of Robin backstory. When asked if that would be the story of Ben Affleck’s Batman film, Affleck replied, “It’s in development, and right now I’m really focused on finishing Live by Night. That’s where my focus is, and I tend to be a one movie at a time guy. So, when I’m finished with this movie, I’ll then focus on my next movie and figure out what that will be.” Ah, so very cryptic. I guess we’ll have to keep on guessing!