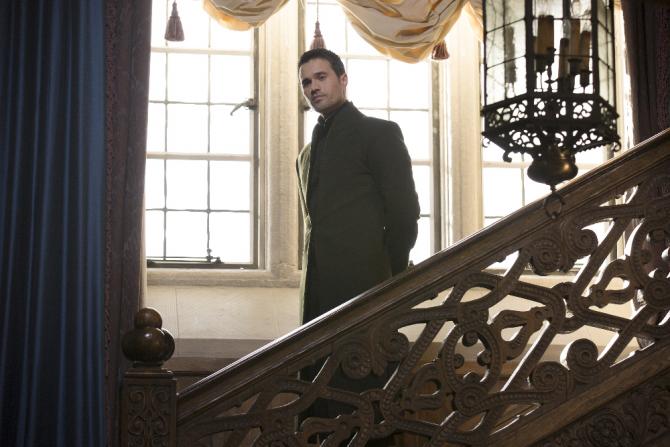 Check out Our Review [WITH SPOILERS] of Agents of SHIELD Season 3 Episode 16: “Paradise Lost.”

There were twists and turns aplenty on this week’s Agents of S.H.I.E.L.D., as HYDRA and their new parasite leader began putting their plans in motion. But as we learned, S.H.I.E.L.D. was in the process of assembling their own schemes to mount an effective counter offensive.

“Paradise Lost” appeared to set the scene for what’s to come in the forthcoming weeks, weeks that will eventually glide right into Captain America: Civil War. While we did get a solid Agent May vs. Giyera fight as an intermission, there were two central stories that set the pace for the episode, and one of them came with a surprise that no one saw coming (not even the characters involved! Premonition joke).

-Sins of The Father-

Hydra head-honcho Gideon Malick was front and center in “Paradise Lost,” where we finally learned something about his past. We were treated to flashbacks of Gideon and his brother Nathaniel, who after their father’s death, wanted to take his place in the ranks of Hydra. The Malick’s were also responsible for keeping the tradition alive of sacrificing a high council member to a foreign planet… to become a new host for Hive. This happened by selecting from a bag of stones. Whomever drew the black stone, was sent to their impending death.

How was it that Malick had never been selected? Their father used a ringer, a notched stone he could feel out, which allowed some poor fool be selected instead. After taking their father’s position on the high council, Gideon and Nathaniel took part in their first ceremony… only they went last. Reaching into the bag, Gideon felt for the notch (despite leading Nathaniel to believe he discarded the stone)… and sacrificed his brother to Hive.

Speaking of Hive, he let it be known who was in charge this week. Surprising Gideon at his own estate, Hive summoned the high council for an emergency meeting. The Alien Parasite even befriended Malick’s own daughter, Stephanie, who seemed overly eager to keep her family’s legacy alive to worship Hive. Once the high council was summoned, Hive decided to unveil his true self, proving Hydra’s efforts to bring him to Earth had paid off.

Malick assumed his time was up. When an Inhuman gave him a glimpse of his future, he witnessed his own death at the hands of Hive. Alone in his study, Malick was approached by Hive (like in his vision). That was when Hive revealed a cruel turn of events: he not only used Malick’s brother as a host, but also retained his memories, which included his former brother’s betrayal. This was when everyone watching assumed Gideon was about to be turned into Malick-jerky, but something else was planned.

Hive turned on Stephanie. He led her on and even delivered a kiss (which is kind of disgusting considering he’s an alien parasite!)… but sucked the life out of her to teach Gideon a lesson of sacrifice. The twist came out of nowhere and was perfectly executed. This shocking development kept Gideon Malick front-and-center this season, but left the door open for him to turn on Hive… the creature his family worshiped for centuries. It wouldn’t be the first time he turned on his family. Just ask Nathaniel.

While Malick was dealing with his parasites, the S.H.I.E.L.D. Task Force was busy trying to track Hive down themselves. On one team, Daisy and Lincoln. The other team… anyone who wasn’t an Inhuman. The non-powered group went on a mission to capture Giyera and stop Hydra from dismantling an Agrochemical company… for unknown purposes. After a sweet May vs Giyera showdown, the task force confronted him on the airbus, only to lose control since one Inhuman can apparently take out a bunch of regulars. We ended with Giyera knocking everyone out… and commandeering the aircraft to a secret underground Hydra lair.

Coming to rescue them… probably Daisy and Lincoln, but they won’t be alone. Their mission took them to an Inhuman wannabe, James a.k.a. Afterlife… who “should” have the powers to raise the dead. Now, living off the grid, he held a grudge against the Inhumans since they never allowed him to gain his actual powers. However, he did hold the knowledge of an ancient Inhuman who would return one day. It came through an ancient Kree Orb (pretty similar to the one from Guardians of the Galaxy) he possessed.

Having completed their mission of finding Afterlife, and gaining possession of the Kree Orb, they returned to their Quinjet only to find the rest of S.H.I.E.L.D. captured. Still, Hydra had their own Inhumans, so Daisy and Lincoln wouldn’t go at it alone. It was time, as they put it, “To Assemble the Secret Warriors Initiative.” Why does everything in Marvel need to be an “initiative?” We’ve been promised the Secret Warriors all season long… and next week, it appears Marvel is ready to deliver. Daisy, Lincoln, the Metal Manipulator Joey Gutierrez, and Yo-Yo our Colombian Speedster will be teaming up to free their S.H.I.E.L.D. brethren. I’m going to go out on a limb and say things aren’t going to go smoothly… and this will lead to another chapter validating the Sokovia Accords.

-Wait… Could We Get Marvel Zombies?

One last thought. Did anyone else notice the talk about reviving the dead? When Fitz & Simmons were inspecting the bodies left over from Hive’s boardroom feast, it appeared Jemma talked about how the leftover spores on the bodies could revive a body. Perhaps that’s just how Hive is able to regenerate, but still… let’s not close the door on seeing a super-powered zombie (take that, Walking Dead!).