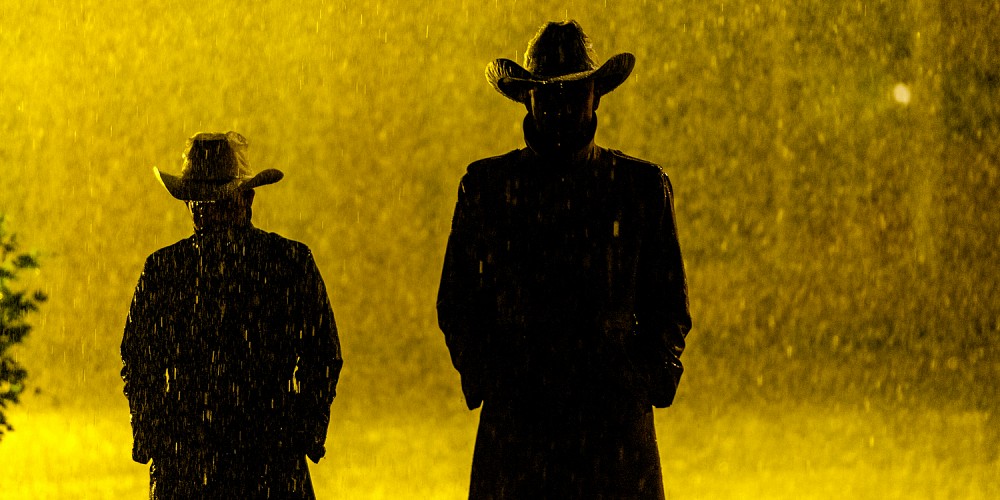 Anxious from the twists in last week’s episode, fans could hardly wait for the newest installment of AMC’s Preacher. Sunday, viewers plopped themselves in front of the TV — or set their DVRs to record — the second to last episode of Preacher, teasing death, the bloodlust of a vampire, and a man on the run. This week, Preacher did not disappoint; however, it did slow down to help build the inevitable climax in the season finale. Details on the pacing and more lie ahead in The Source’s Preacher Episode 9 review!

We begin with the continuing drama of the mysterious Cowboy as he arrives at Ratwater. When we last checked in with him, the Cowboy had just found his wife and daughter dead and pecked at by crows. Intent on revenge, the Cowboy returns to the saloon and proceeds to slaughter every individual inside. But what would an action sequence be without music? Before the real killing begins, the Cowboy demands the singer to “finish the song,” and naturally, he does his best. However, the Cowboy ends up killing the singer in a brutal swing with his blade. His work done, he pours himself a drink, and the audience sits back in awe. Throughout the entire sequence, the viewers are treated to a fantastic opening for an episode, but perhaps more importantly, we learn just how relentlessly badass the Cowboy is.

From there, we find Jesse Custer in the back of Sheriff Hugo Root’s squad car. During the ride, Root implies Jesse has killed Eugene and sadistically warns him about how child killers are treated in prison. But our “hero,” Jesse, escapes thanks to a pen, once again demonstrating his resourcefulness.

The Pancakes and Wine

The next time the audience sees Jesse is with a homeless couple. While most may have overlooked this moment, its importance should not be denied. In almost all mediums, whether they be TV shows, books, or movies, nothing happens without reason. Last week, Jesse was isolated. Aside from a scene with the angels and the ending with Quincannon and his men, Jesse’s only friend was his projection of Eugene. He was projecting Eugene not only from his guilt surrounding Eugene’s stay in Hell, but he was also projecting a friend because in the 7th episode, Jesse had mistreated his few, real friends, pushing them away.

With that in mind, this friendly, non-hostile interaction between Jesse and the homeless couple cements the idea of a changed Preacher, which the rest of the episode builds on. Although Jesse is kind and shares a nice breakfast of pancakes and wine, at some level, and from the changes we see later – including the call to Tulip and his interaction with Cassidy – Jesse is realizing during breakfast that he needs his friends.

Thanks to this scene, Jesse moves towards rekindling his relationships with both Tulip and Cassidy.

A proper review of “Finish the Song” will never be complete without mentioning the episode’s most alarming moment.

While last week’s episode tended to trick the viewer, this week’s twist did not outsmart. Instead, the approach was centered around the seemingly uncharacteristic moment when Emily fed her “boyfriend,” the Mayor of Annville, to the wounded and starving Cassidy. Up until this point, Emily had been the sweet, girl next door type, helping Jesse out as much as possible. She held onto the hope that one day he’ll ask her out, but the day never seems to come. With Tulip’s return, Emily’s ultimate goal seemed unlikely, so maybe, in her own warped reasoning, Emily thought, “If I save Cassidy and get rid of the mayor, who helped Quincannon, maybe Jesse will love me. Tulip does things like that. Maybe I should, too!”

Right now, that’s my best guess, but as I stated before, things don’t happen without reason. Just before she appears to make her decision, the audience finds Emily watching Alfred Hitchcock’s classic, Psycho. As the camera zooms in on her face, similar to the ending of Psycho, we hear Norman Bates’ monologue about traps. Perhaps Emily felt that trapping the mayor was the only way out of her own trap. For now though, one guess is as good as any. Hopefully, viewers will learn more in the finale!

As the mortals of Earth were set-up for the finale, the angels, DeBlanc and Fiore were doing the same “somewhere further south, much further south.”

After debating whether or not to visit Hell or Heaven, the duo found themselves without a choice; they had to go to Hell. In this debate and just before boarding the bus to Hell, viewers find hints about the nature of DeBlanc and Fiore’s relationship: before attempting to call Heaven, Fiore expresses the consequences of that decision, stating that “they” would never allow them to be together again. While this statement could be taken as a reference to a long, platonic friendship, it comes into question just before they leave:

Before boarding, the bus driver tells Fiore, “Sorry, no carry-ons.”

Fiore laments, commenting, “I brought my comics,” but DeBlanc touches him gently and replies, “It’s alright, my dear. Leave ’em behind.”

As the bus moves away, some viewers may ask themselves,”Is this relationship strictly platonic?” Right now, we know nothing for certain, but that scene definitely implies an intimate, romantic connection.

Later on, in Hell, viewers learn that the Cowboy’s narrative is his personal Hell, which he keeps reliving, over and over again. This fact is demonstrated to us beautifully in the intense way the horrific moments of his story are repeated in a fast-paced, stressful sequence. However, the angels bring a pause to the cycle. In their need for a “Plan B” to get Genesis back from Jesse, they inform the Cowboy they need him to kill someone, presumably Jesse Custer.

The violence and relationships between characters keeps viewer intrigued throughout the ninth episode of Preacher, as it sets up an epic closure for next week. The brief moments of action are filmed uniquely, and the monologues illuminate the characters while not wasting any time. Episode 9 and the whole season, so far, are a hit.

Be sure to catch The Source’s next review of Preacher’s season finale, as well as our reviews of other TV shows, comics, and movies!