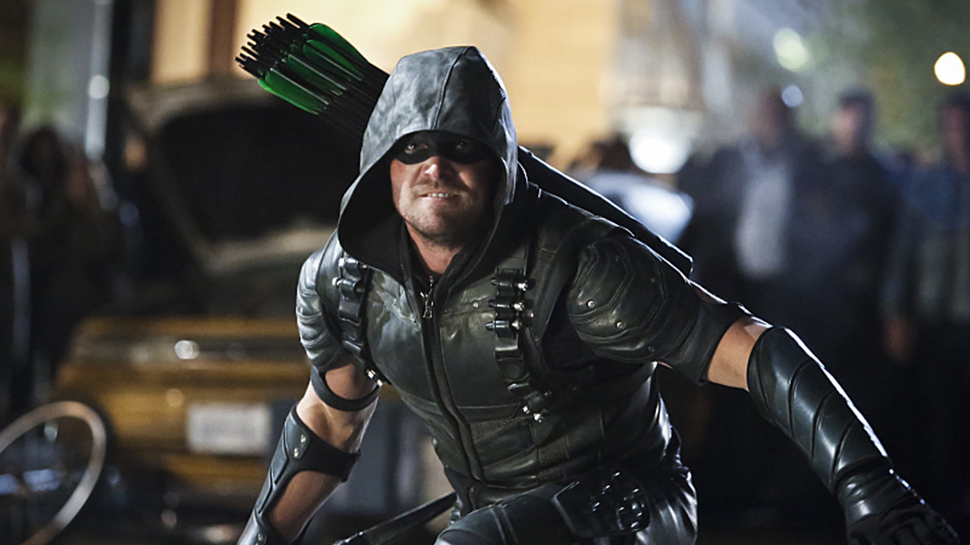 Check out Our Review [WITH SPOILERS] of Arrow Season 4 Episode 23: “Schism”

I don’t think I’m going out on a limb here if I said that season four of Arrow was uneven. The Olicity stuff kind of ground the midseason to a screeching halt, the flashbacks were fundamental exercises in time-wasting filler, and the Diggle brothers subplot really was illogical and overwrought.

That being said, Damien Darhk was a fascinating villain and Neal McDonough absolutely nailed the role. There was some utterly impactful stuff with Thea and the farewell to Laurel was effectively handled, especially in the terms of Quentin Lance’s heartbreaking response to the loss of his child. Oliver grew as a hero from violent vigilante to inspiring superhero, and there were some welcome new villains introduced – particularly, the Joker-like Lonnie Machin.

So how did the finale do? Well, like the entire season, it was uneven. I loved Ollie winning the day thanks to hope. That really followed the thematic track the season set out on in episode one. I liked how the episode wasn’t bogged down with Oliver and Felicity nonsense. During a time of crisis, the two stayed staunch allies and helped each other win the day. I loved the role Curtis took in inspiring Oliver to go up against Darhk one last time. This bodes very well for the future of Curtis Holt in Arrow, which is a good thing because Curtis is one terrific addition (see what I did there?).

Now for the bad. The flashbacks did absolutely nothing for the main plot. Nothing. Yeah, it kind of gave the origin of Darhk’s idol, but really, that could have been handled in a single flashback or a moment’s exposition. The characters of Ryder, and the Russian woman whose name I can’t be knackered to remember, do not play into the main story at all. It was all filler that could have been devoted to exploring more of Darhk and his family. Because Darhk, as effective as he was, did not grow much beyond the adversary role. There was no meat to him because other than some rudimentary attempts, there was nothing provided that really made the viewer understand what drove the evil wizard. It was a moment of catharsis when Oliver killed Darhk by plunging an arrow in the villain’s heart, but the only reason we hated Darhk is because he did dastardly things. We didn’t know that man behind the evil, not in the way we grew to understand Malcolm Merlyn or Slade Wilson.

The season ends in an interesting place, with Team Arrow fractured. Thea goes to find a release from her murderous impulses, and Diggle leaves to make peace with himself after killing his brother. So we are left with the heart of the team, Oliver and Felicity, ready to continue fighting the good fight. They may not be lovers, but they are allies, and I guess in this world that’s what matters most.

As we move forward to season five, I hope Berlanti and company are willing to allow the series to break formula. I hope that we have seen the last of the endless debate regarding the morality of killing. I mean really, do any of you guys need to see another version of a hero being forced to kill a bad guy, and then spending a bunch of episodes feeling guilt over his or her actions? The show has covered this ground before and the debate is getting mind-numbing. It seems like the writers and producers are struggling to find new avenues of conflict and drama. It’s time to move on; it’s time to stop this moral wheel-spinning and focus on character and action.

All that said, there was some kick-butt moments in the finale as Team Arrow stood triumphant, moments tainted by haphazard morality plays and time-wasting flashbacks. The series is at an interesting place as we head to season five, so I just hope some kinks can be worked out.

But all might not matter anyway, because Barry saved his mom over on The Flash and we all know what that can lead to.