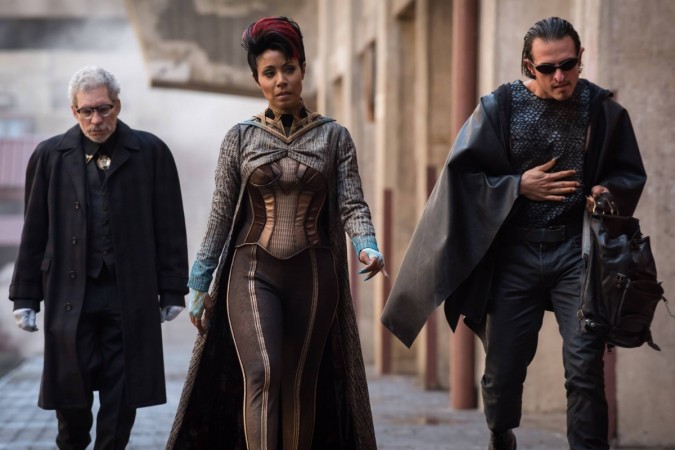 These are the 5 things that kicked us in the rib cage (and sometimes in a good way) as we watched Gotham Season 3 Episode 2- “Mad City: Mad City: Burn the Rich.”
And, our observations are a little “spoilery,” so…if you’re watching it on Hulu later tonight, I would bookmark this article and join us tomorrow morning. Still with us? Good, we’re always glad to have ya’.

Dear Gotham, please do not force me to ogle a thirteen-year-old. Yes, I understand that Maggie Geha looks like the classic Poison Ivy. In fact, Geha might be the most perfect live-action Ivy in the history of the character. She even has an Ivy vibe about her that was on full display this week. But really, Gotham,you’re sexualizing a thirteen-year-old. You’re going all “Lolita” on us and it makes me feel slimy. Between this and the debate last night, Monday night TV had more slime than a Double Dare marathon. There might be a story there with an aged thirteen-year-old in an adult body, but Gotham is not known for subtlety, so what you have now is a little girl (who matured rapidly) poured into a green Jessica Rabbit dress resulting in something both disturbing and clumsy.

2. Attack of the Clones

The results might surprise me, but boy am I uninterested in a season-long exploration into a Bruce Wayne clone, or twin, or whatever Goth-Bruce is. There is no precedence for this nonsense in any Batman comic that I can think of and it just makes this whole overarching narrative overstuffed and more than a bit cliché. Again, this whole thing could surprise me, but evil doppelganger stories are usually reserved for the worst kind of soap opera pap.

I am loving Valerie Vale. She adds a great Lois Lane-like element to Gotham and really has a great chemistry with James Gordon. She is a very active and round character and I can’t wait to learn her backstory, so while the Ivy stuff seems like the worst kind of female exploitation, Gotham is giving us a strong female lead in the form of the intrepid Valerie Vale.

While I was scrubbing myself with lye soap and a wire brush from the Ivy crap, I did love the climax between the Penguin and Fish Mooney. Now, I’m not the biggest Mooney fan, but man, her speech on how proud she was of transforming the simpering Oswald Cobblepot into the monstrous Penguin actually moved me. It was three seasons’ worth of conflict and interactions boiled down into a great speech about pride and creation. In this one moment, Fish became the mother Penguin never had and I freakin’ loved it. This kind of thing is when Gotham is at its best.

Wow, Gotham just wanted to make the Strange’s Monster Men into an X-Men riff, huh? Strange hair, leather, random power sets; it was like a Bryan Singer daydream come to life. Gotham set up the Monster Men to be a much bigger deal so I was surprised to see them all dispatched in two episodes. Although the return of BD Wong as Hugo Strange is always welcome. Wong is awesome in anything and everything.