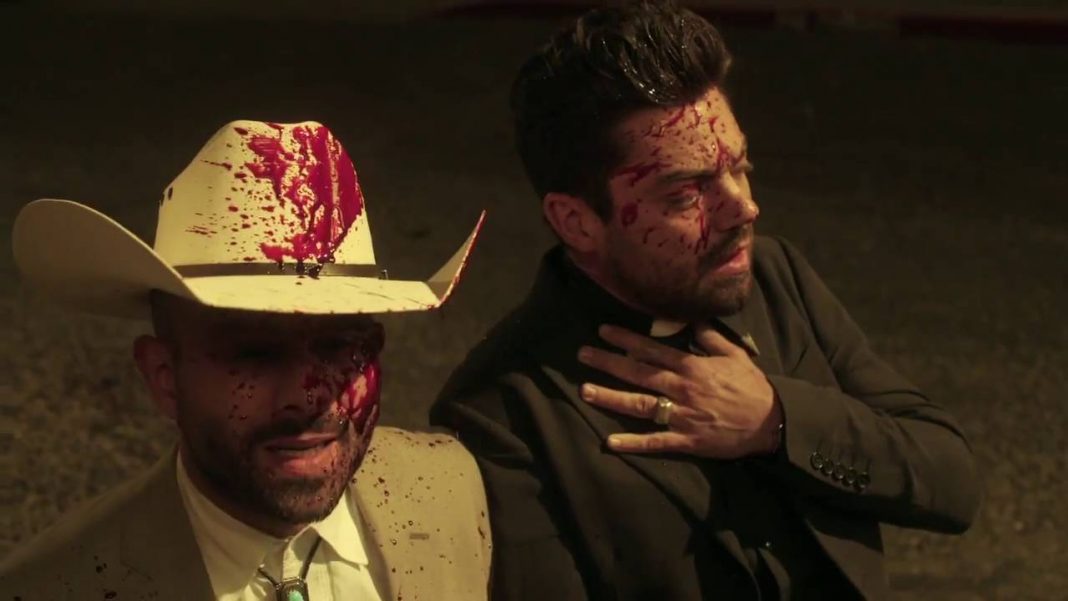 Check out Our Review [WITH SPOILERS] for Preacher Season 1 Episode 6: Sundowner

AMC’s newest drama, Preacher, has been collectively blowing our minds. This past week, nothing has changed! From possibly the longest fight in history to a moment of erroneous damnation, the unorthodox show kept us on the edge of our seats once again. By the end, the viewer could be left with only one, quintessential expression: HOLY S**T! All of this and more lie ahead in the Preacher Season 1 Episode 6 review.

As the episode opens, the audience is back where the previous left off: in the diner with Jesse Custer and the angels, DeBlanc and Fiore. The angels desperately plea for Jesse to return his power. Skeptically, Jesse demands they explain what it is. Reluctantly, DeBlance explains: Preacher’s power is called Genesis. It is not directly the work of God; it is the product of love between an angel and a demon. Essentially, Genesis, in its omnipotence, could threaten the balance of power between good and evil, potentially annihilating all creation.

After this, one of the funniest, most lengthy fight scenes in television history ensues. Together, Jesse and the angels fight a seraph for who knows how long. Even after the opening theme, the fight continues. It goes on so long even Cassidy is brought into the mix at the worst possible moment. When the angels return almost instantly after death, it leaves Jesse and even Cassidy in an unfair position. Eventually though, the boys manage to restrain the mighty lady seraph.

Throughout the chaos, it is filmed brilliantly! As the fight goes on, the dead bodies of DeBlanc and Fiore stack up all over the trashed motel room. Best of all, it is filmed in various ways. At some points, the audience is left outside, looking at the Sundowner Motel sign and hearing the pandemonium. At others, only glimpses are seen through a bullet hole.

After this encounter, the episode ventures into more awkward territory.

Beginning with Tulip when she stops by Emily’s house to confront her. Tulip warns her to stay away from her boyfriend, Jesse Custer. Soon after, the two ladies with a crush on the Preacher seem to develop a bond. Even stranger, Tulip attempts to help Emily out. Maybe she was just doing it in hopes that it would please Jesse, but it is never made clear. All that is obvious is the awkward humor.

However, the episode is also filled with stress.

As a group of high school boys start to be nice to Eugene, the tension builds. Given the graffiti from the past episode, one would think Eugene was being tricked. Fortunately, that never happens, but in the end, a much worse fate comes for him…

In his rage, Preacher sends Eugene to Hell.

All he wanted to do was convince Eugene that he was doing God’s work. Yet, the only person convinced of this fabrication was Jesse himself. Now, because of his viscerally articulated anger, Eugene might be stuck in HELL, and it’s all Jesse’s fault. The only positive part of that moment is also the worst; admittedly, Eugene’s disappearance happens to be a fantastic cliffhanger. We at The Source cannot wait for the next episode. Eugene MUST be saved!

Overall, the opening is fantastically filmed, using multiple angles to take full advantage of the scene. More importantly, Preacher once again balances humor, horror, and character development to drive the series. At this point, an intense climax is inevitable. As Jesse struggles with his twisted view on God’s will, Genesis appears to be living up to its evil potential.

Be sure to check The Source for more reviews of Preacher and a variety of articles all about your favorite shows, movies, comics, and characters!

Another Guardians of the Galaxy Casting Call!