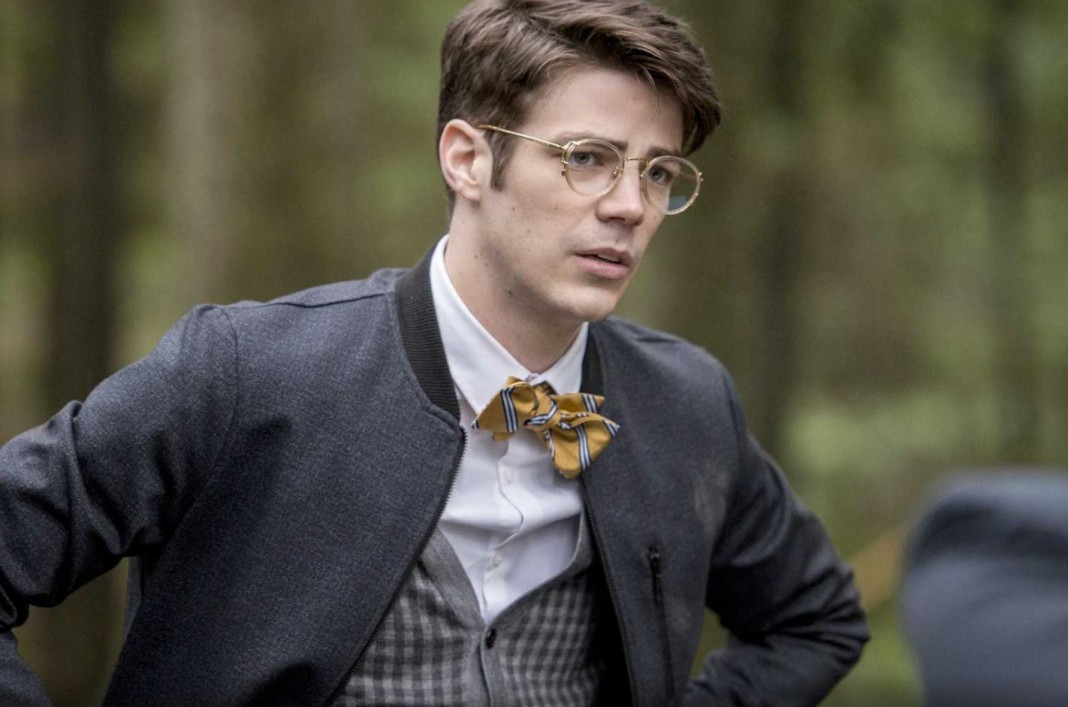 It was a week of Rebirth for DC Comics, but on TV, things were business as usual. Supergirl took the week off for Presidents Day buy there was still more than enough action to go around. So jump in your Time Sphere and join us as we look back at the DC TV week that was.

Click Here for The Flash Season 2 Episode 14: “Escape From Earth 2.”

Barry Allen’s Earth-2 adventure continued this week with some big changes for our entire cast. First, we have Barry, imprisoned and helpless in Zoom’s secret lair. He wasn’t alone through as Jesse Wells and some mysterious masked man are also being held by the evil Zoom. The big question on everyone’s mind is who was that masked man? To me, the mask kind of looks like Ferro Lad’s headgear from Legion of Super-Heroes, but we can never be that lucky can we? Nope, I won’t ruin risking any spoilers with rampant speculation but what I will say is that the masked man and his coded clues is a great element to an already loaded show and I can’t wait to see who is under that mask.

Zoom grows more fearsome by the week. So much so that Killer Frost turns on her boss this week, leading Earth-2 Iris, Earth-2 Barry, Harrison Wells, and Cisco right to Zoom’s layer. Earth-2 Barry is awesome; he is way more Clark Kent by way of George McFly than Barry Allen, but beneath that bow tie and sweater vest beats the heart of the hero. I mean, bow tie Barry gave our Barry the pep talk he needed to escape Zoom’s cell. Jesse Wells is also freed but sadly, the man in the iron mask was left behind.

Meanwhile on Earth-1, Jay Garrick and Kaitlin endeavor to bring down Geomancer who still dresses like an extra from the first X-Men film and still has no personality to speak of. I’m sure this was on purpose as Geomancer is just an excuse for Jay to finally get his speed back using some newly created Velocity Nine. It’s really cool seeing Jay back in action, but in truth, Team Flash didn’t need Jay to defeat Geomancer, as Kaitlin took care of that bit of business. So with Earth-2 killer-Kaitlin freeing Barry and Jesse on Earth 2, and good Kaitlin taking out Geomancer on Earth 1, it was certainly a Snow heavy week. Jay is needed though as the final portal to Earth 2 breaks down and only Jay has the speed to fix it. Barry’s team makes their escape o Earth-1 as Jay clears the way. Sadly, Jay stupidly stands in front of the portal and right before the whole mess collapses, Zoom grabs the Earth-2 Flash setting things up for next week.

This episode wasn’t as gripping or epic as the first part of the  ‘Earth-2’ saga, but it was still pretty damn good with great moments for two Kaitlins, Barry, and Jay. And dammit, who is that man in the mask??

With dimension hopping, time travel, and super-alien throw downs all featured regularly on DC TV these days, it’s amazing that Arrow can take such a simple approach like the one featured this week and still have a high stakes and intense feel.

This week’s episode is beautiful in its simplicity. You have a group of demolition experts hired by Damien Darhk attempting to take out a building where Oliver and Team Arrow are gathered for a campaign speech. That’s it. Within the confines of this wonderfully simple conflict, so many great character moments take place.

First and foremost there is Quentin Lance who willingly breaks up with Felicity’s mom in order to protect her from Darhk. Lance is back to being the man that puts others first. The past season and a half has been rough on Lance. Last year, he became downright annoying with his obsessive hunting of the Arrow, but this year, we are treated to the Quentin Lance of old. This week, Lance helps take down the team of demolition experts and puts himself between Felicity’s mom and danger, which just makes Mama Smoak love him more. Quentin tries to break up with Donna Smoak, but the big lug comes around by episode’s end and AWWW.

We also have Team Arrow working in perfect harmony to take down the generic but somehow still potent threat of Darhk’s agents of destruction. I mean, it was just a crew of killers for hire armed with bombs, hammers, and nail guns, but somehow the action this week kicked nine types of ass; it was real heart-in-throat stuff. Team Arrow rally and take down their adversaries so put this one in the loss column for Darkh. But the baddie does not stay down for long as the end of the episode reveals that Darhk now has Oliver Queen’s son under his control. If anything can drive a wedge between Oliver and Felicity, it’s this secret come to light.

But those are troubles for another day. This week, it was all joy for Felicity Smoak as not only did she help her crew track down Darhk’s mercs, she also was given an engagement gift by her top employee Michael Holt. Holt creates a microchip that will allow Felicity to walk and I have to be honest with ya’ll, I welled up during this scene. Real man tears mind you. And what was Oliver’s response to this beautiful moment? Why, he called Holt “Terrific,” of course, and that one word should get DC fans very excited.

The only thing that brings this episode down is the still-going-absolutely-nowhere flashbacks. These might become important later, but I might not be awake to see any revelations because yipes, are these flashbacks to dullsville with stock characters and paper conflicts.

But that Michael Holt moment, wow! Best moment of the season so far.

Only the entire world was at stake this week on DC’s Legends of Tomorrow as Vandal Savage tries to create his very own army of Firestorms!

This is the first mission where our heroes look confidant as Captain Cold and Sara Lance attempt to rescue Martin Stein, Ray Palmer, and Heat Wave from the clutches of the Cold War-era Russians. It was all big, brash, and bold but still left room for some great character work, particularly involving Martin and Jax, the two halves of Firestorm.

Martin and Jax finally find a trust that allows them to defeat the beautiful but evil Russian Valentina Vostok. You see, Vostok forced Stein to merge with her, creating a new and deadly Firestorm combo. Fortunately, Jax is able to convince Stein to separate from Vostok causing the scientist to mushroom cloud. This is a new era for Firestorm as the two halves of the matrix are finally are on the same page.

The biggest conflict this week is between Sara and Cold. Rip Hunter orders Cold to kill Stein if it seems like the brilliant scientist became compromised. Hunter sees the future and understands that if Stein tells the Russian how to build a Firestorm, the future will die. He orders Sara to kill Stein if need be, and surprisingly, Cold acts as her moral compass. Man, when Captain Cold is the bastion of morality on a team, you know there’s going to be trouble. Cold’s main purpose is to save Heat Wave because as we know, Cold would never leave a Rogue behind. Heat Wave has a moral quandary of his own as he refuses to stand up for Ray Palmer in the prison. Palmer gets thrown quite a beating and later, saves Heat Wave from being tortured. On the surface, there is not much to Heat Wave, but each week the series adds subtle nuances to the character. It’s fun to watch, and of course, Captain Cold is always fun to watch.

So Hunter rescues his team and puts one over on Cold while Firestorm reunites; Sara Lance proves to herself she is no longer a mindless killer; Captain Cold helps a pal; Ray Palmer takes a beating for Heat Wave, and Heat Wave gets introduced to the concept of self sacrifice. A loaded episode, but where was Hawkgirl, you ask? She pretty much did nothing as usual. I swear the brain trust behind this series really should be forced to watch Justice League Unlimited in its entirety, because this winged afterthought is not the Hawkgirl of old but some winged window dressing.