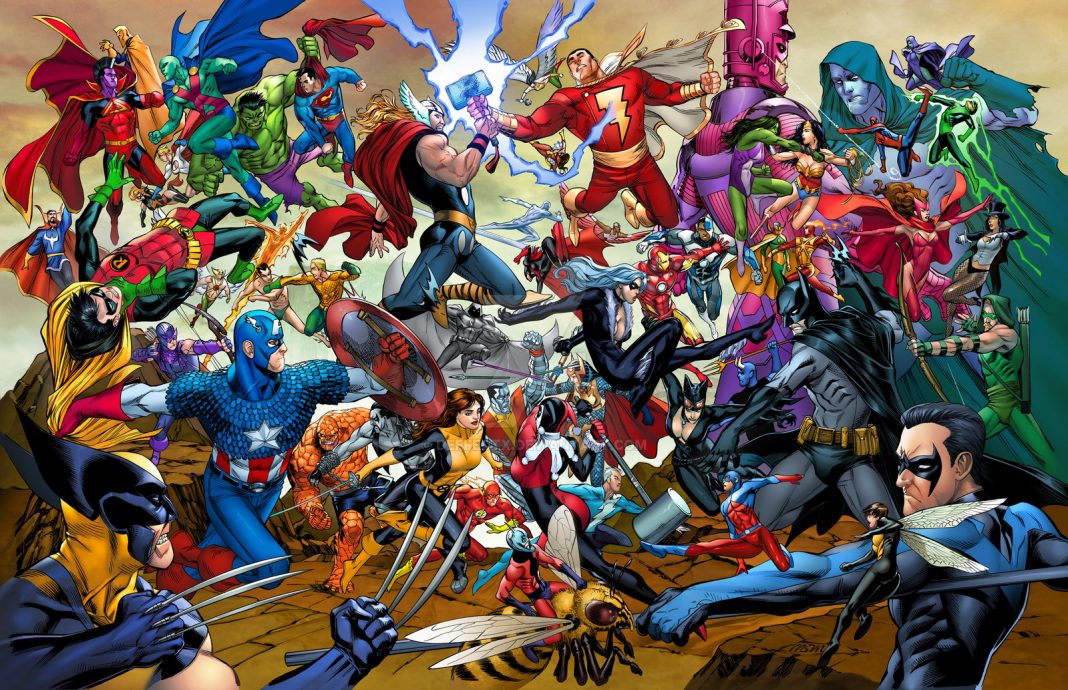 Seeing worlds collide is always awesome. From comics to movies, we’ve seen all kinds of crossovers, but we’re always hungry for more. As amazing as they sound, sometimes they seem too unlikely or impossible to ever happen. But hey, we’ve recently seen Batman and the Ninja Turtles team up and there’s a Justice League/Power Rangers crossover on the way. The way I see it, if those can happen, then maybe some of the following ideas aren’t so crazy! So, here are a few examples of some awesome superhero and sci-fi crossovers that need to happen!

Probably the most likely to happen on this list would be a showdown/team-up between DC’s groups of loveable bad guys! DC had two similar teams of villains who got their own comics, and I always found it strange that they never had a chance to meet each other.

What’s also funny about it is Deadshot was a member of both teams. So, with Suicide Squad having a surge in popularity recently, maybe it’s time these baddies shared a crossover! Oh, the insanity that would ensue! Sure, it’d be tricky, but I think if it was handled correctly, we’d be in for a fun ride. Being bad would never again look so good!

Space — a vast tapestry of infinite possibilities. There’s a ton of sci-fi characters you could pair up, but it seems the famous Star Wars franchise has never had a proper crossover before. Now that both Star Wars and Marvel are owned by Disney, there’s an opportunity available for the perfect conjoining of both franchises! However, the only one I want to see is a crossover with the Guardians of the Galaxy!

The Guardians and the Rebels are similar in some ways, and both universes are home to some interesting aliens, too! We could see Han Solo team up with Star-Lord, a conversation between Chewbacca and Groot, or bear witness to Darth Vader and Thanos fighting over an Infinity Stone! The awesome ideas in this crossover are limitless! I’d even like to see it happen with the cast of The Force Awakens or Star Wars: Rebels! With these two properties under the same roof, Marvel might be closer to that galaxy far, far away!

You know what’s cool? Giant robots fighting giant robots! If only there were two nostalgically awesome franchises that had giant robots in them…Oh, wait! There are! Sure, the Voltron paladins don’t exactly have the support the Autobots have, but what they lack in numbers they make up for in power!

It’d be pretty awesome to see the Defender of the Universe team up with the heroic Autobots! It’d be even better to seem them take on both the Decipticons and the Galra Empire! And it seems like it’d be versatile since both franchises have been in multiple forms of media. There’s a chance that sparks will fly between vehicles and lions one day!

Speaking of giants fighting each other, what would happen if the King of Monsters took on the ravenous Titans? An awesome crossover, that’s what!! In the world of Attack on Titan, giants have taken over most of the planet! Between that and their healing factors, it sounds like they would greatly overpower the giant dinosaur, right? Maybe, but if Godzilla’s long career of smacking down kaiju has taught us anything, it’s that he doesn’t back down from a challenge! Sure, it would probably be a stretch to have these two worlds collide, but I think it’d be well worth it. Who knows, if we can get a new Godzilla vs. King Kong movie then maybe this is possible, too! On that day, humanity will receive a grim reminder: there can only be one king of monsters!

Recently, our favorite wall-crawler and regenerating degenerate have become something of an unlikely duo. So, what would happen if Marvel’s not-so-dynamic duo met Valiant’s “worst super-team”? When you think about it, the two of them have a similar set up: both have the reckless guy who wreaks havoc, while the more level-headed one tries to rein them in. So, putting these two teams together actually makes a lot of sense.

It’d be pretty hilarious to see personalities like Deadpool and Woody work off each other. It’d also be funny to see Spider-Man and Quantum having to team-up to stop their collective chaos. Hey, Spidey’s had weirder team-ups over the years, so it might not be as crazy as you’d think!

So, funny story: back in 2003 I watched both Teen Titans and TMNT when they were on TV. I really liked both teams and I always wanted to see them do a crossover. To me, the two had a similar team dynamic, so I liked imagining what it’d be like if they met. They were just daydreams; I mean, what were the chances DC would ever do a crossover with the Ninja Turtles? Apparently, more likely than you’d think!

Batman recently met up with the heroes in a half-shell, so maybe it’s not so ‘out there’ after all. Just think of how awesome it’d be to see them team up! The only thing cooler would be to see the villains meet, too! We could see Shredder and Deathstroke partner up, or watch Krang make a deal with Trigon. If the Turtles can team up with the Ghostbusters, I say anything’s possible! Cowabunga, Titans!

Blizzard’s Overwatch is a really fun game and I recommend trying it out sometime. It’s sometimes chaotic, sure, but it’s truly a story about saving the world and proving that it will always need heroes. Though I have to say, something about these guys is familiar. They remind me of another team of superheroes who assembled to take on big threats — The Avengers! It actually surprised me that the two shared a few similarities (Soldier 76 and Captain America for example), so it would make sense to see them team up!

Both teams have lots of team members and bad guys to spare, and there’s no shortage of awesomely crazy things these two teams could do together! Would it be in the hectic future of Overwatch or in the lively Marvel Universe? Who knows, but it’d be amazing no matter where it takes place!

Would it be a bit of a stretch? Probably, but I think it can be done. With both these franchises reaching high popularity and Overwatch even getting a few comics, there might be an opportunity. Here’s hoping that Earth’s Mightiest Heroes get to meet soldiers, scientists, adventurers, and oddities very soon!

Okay, to be fair there were a few Marvel/DC crossovers before. Thing is, that was a long time ago and so much has changed for both Marvel and DC since then. So, why not do another one for the modern era? Marvel and DC still have a lot of characters that would play well off each other, and there’d be no shortage of fans who would want to see it happen! It would be a superhero spectacle like no other!

Which awesome crossover do you want to see happen? Let me know in the comments below!