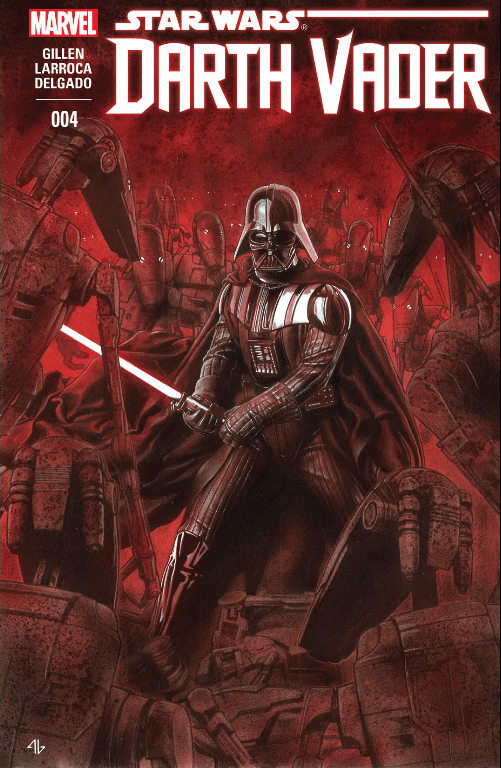 Check out Our Review [WITH SPOILERS] for Darth Vader #4!

This particular issue of Darth Vader really picks up the pace in the first story arc. If you aren’t caught up yet, check out our other reviews of Darth Vader #1, Darth Vader #2, and Darth Vader #3. Kieron Gillen did a great job at incorporating parts of the prequel movie series into this storyline. Gillen also progresses the personality of Darth Vader; he becomes snappier, to the point, and very concise in his actions making the reader feel like they can follow Darth Vader anywhere with confidence and without question. Probably the most important takeaway from the writing is the growth of Triple-Zero and BT-1 as characters. You get a better look at Triple-Zero’s temperament and also his background. Aphra also progresses as a character during this issue.

Salvador Larroca does a good job in this issue, expertly conveying Darth Vader’s emotional struggle as well as his undeniable ability to fight off his enemies. However, he seems to change his style a bit. While he keeps a swift pace for the reader, he shows more violence and fighting. Once again, Edgar Delgado does a fantastic job at coloring the book in a way that describes the tone of the dialogue.

We left Darth Vader in the 3rd issue when he was planning on going to Geonosis to find his own secret droid army. Upon arriving with BT-8, Tripel-Zero and Aphra, Vader has a flashback of the last time he was on Geonosis. This flashback is a great way to link his sad story to the prequel movies, specifically Star Wars Episode II: Attack of the Clones.

They then head into the cave containing the old droid plant to find a Geonosian Queen melded with a machine currently hatching flying-droid Geonosians. Vader immediately slices the Geonosian Queen from its machine-half. Vader and BT-8 proceed to destroy all droids who are already hatched and take the mobile droid creation plant with them.

Aphra and Vader begin to retrofit the machine to produce the droids that they need. Triple-Zero then informs Vader and Aphra that a bounty hunter named Krrsantan Black has brought them something important: Black has brought Doctor Cylo-IV to Vader and he has important information regarding the Emperor and his plans. Triple-Zero tortures Doctor Cylo-IV and uncovers the location of his base, where he was shipping illegal alien organs, and sets course to it.