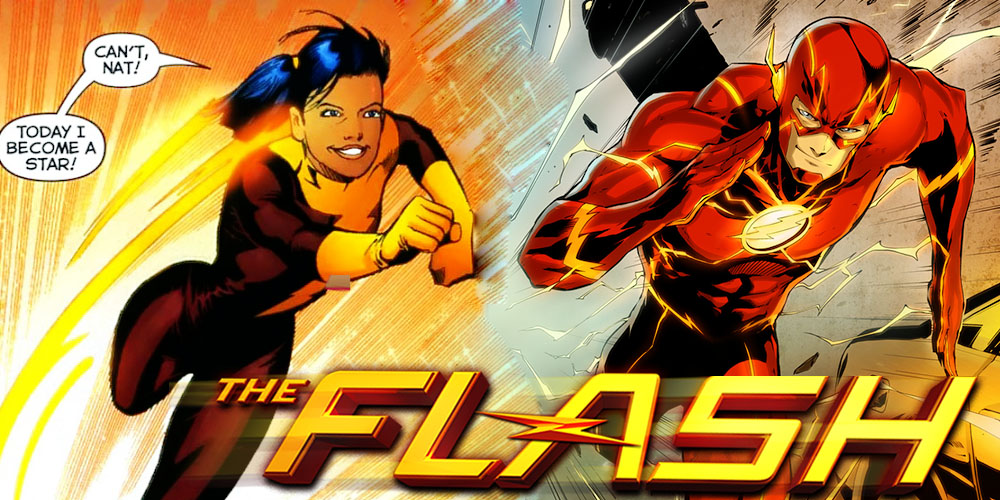 If you watch CW’s The Flash regularly, or at least watched it this week, you witnessed the debut of a hardly-known DC Comics’ character. After a month-long hiatus, the show returned to television Tuesday night and featured yet another speedster. Oddly enough, regular viewers were surprised to see the villainous speedster was NOT another return of the Reverse Flash; this time the audience was treated to a new, female speedster by the name of Trajectory. Cisco asked on Tuesday night, “Why do the crazy ones always name themselves?” Well, we too wonder how the name and character, Trajectory, came to be. In doing so, we have created this for you, the reader, so you too can know just who DC Comics’ Trajectory is.

In 2006, the girl behind the hero, Eliza Harmon, first appeared as a member of Lex Luthor’s “American Dream Team” in 52 #17, a comic run by a fantastic team of writers including Geoff Johns, Mark Waid, Grant Morrison, and Greg Rucka. Thanks to them and Luthor’s Everyman Project, Eliza begged to be given super-speed. When Luthor granted it, she became the hero known as Trajectory.

However, not everything went perfectly in the Everyman Project, which transformed regular humans into meta-humans; Eliza could not slow down to a normal speed without a drug called Sharp. Naturally, she became addicted to the drug and despised Luthor for making her need it, storming out of the team and the series until 52 #21. After overcoming an addiction to Sharp, her friend Natasha Irons, aka Steel convinced Luthor to let Eliza back on the team. Lex agreed, but took away Eliza’s powers during a fight in 52 #21, killing her and inadvertently ending her dreams of joining the Teen Titans and becoming the next Kid Flash.

Sadly, Trajectory’s story is quite short in the comics, but the creative team behind The Flash still managed to capture her crucial characteristics – and add its own spin – regardless of her brief comic book history. The show replaces Sharp with Velocity 9; it’s responsible for her powers, creating a much more powerful addiction and, unfortunately, a split personality. This Jekyll and Hyde-type battle drives Eliza and in the end, much like Jekyll, Eliza falls victim to the evil she has become and disintegrates into the telling blue lightning.

Although her story was short-lived in both the comics and on the show, superhero fans know one thing for certain: no one  – and I mean NO ONE – stays dead anymore! With that in mind, hopefully viewers will see Trajectory return to the Flash so she can fulfill her dream of being a member of the Flash legacy.