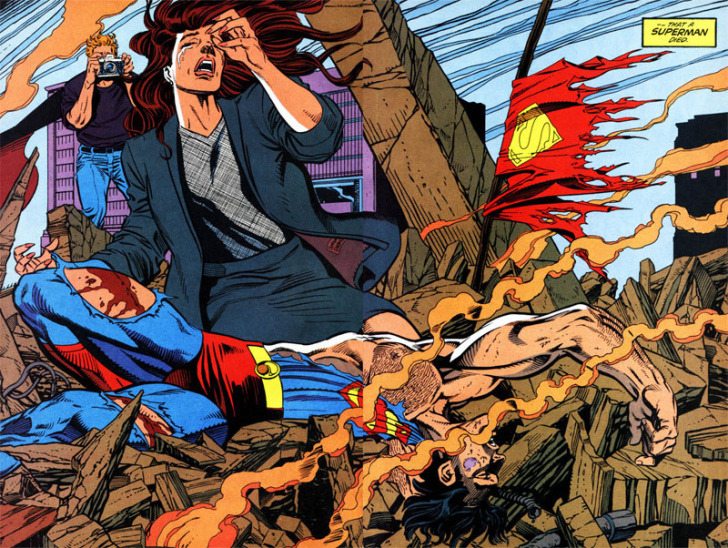 Welcome back! We’re taking a look through comic history and deciding which books set the tone and defined their eras. So, let’s crank this baby up to 88 miles per hour and head back to 1985!

(Be sure to check out, discuss, and vehemently disparage my choices in Part I.)

Side Note: Some dispute this age, because some comic historians say we are currently in “The Modern Age”, which began in 1985. However, for this article’s sake, let’s roll with “The Copper Age.”

Why: Before writer Marvel Wolfman and artist George Perez made this story, DC’s continuity was a mess! You had multiple versions of the same hero running around (kind of like Marvel now), contradictions left and right in stories, cluttered origins, and cats and dogs living together! Mass hysteria!

DC took a good look at themselves and said, “Hey, let’s change that!” In the now legendary story, Crisis got rid of all the multiple universes and various versions of their superheroes so we only had one version of each. It set the stage for DC’s continuity for the rest of the 20th century. It is an amazing story and should be read by all.

Why: When DC gave Frank Miller range to write his own Batman story in 1986, it elevated the Caped Crusader to whole new level. Set in the future, it tells the tale of an older Bruce Wayne donning the cowl after long abandoning it. What set the story apart was how different it was from any Batman story before. Also, it was commenting on the times with President Ronald Reagan appearing from time to time and a focus on “talking heads” on television. This mini-series set the new standard for Batman stories for years to come.

Why: As great as The Dark Knight Returns is, Watchmen is frequently credited for elevating the comic book medium to a new level. Alan Moore and artist Dave Gibbons’ maxi-series tells the tales of superheroes in an alternate 1985. However, it isn’t your typical superhero story. It examines the political side of being a hero and examines the psyche of the main characters. The series earned a bunch of accolades, including a Hugo Award and a spot on Time Magazine’s list of Best 100 Novels.

Like I said earlier, some call the The Copper Age “The Modern Age” that is still continuing today. But 30 years is too much for one age, so we’re going to break up this overly long expanse of time and create our own eras. Since we are in an element theme, let’s continue with that.

Why: In the early 90s, some of Marvel’s top artists and writers left the House of Ideas to create their own comic line with creator-owned characters and series, including Rob Liefeld, Jim Lee, Eric Larsen, Chris Claremont and Marc Silverstri.

While series like WildC.A.T.S., Youngbloods and Savage Dragon hit it big, the clear signature title of the new comic label was Todd MacFarlane’s original series, Spawn — the first issue sold 1.7 million copies! Telling the tale of a dead US Marine, who makes a devilish deal to walk Earth again and see his wife, Al Simmons becomes an agent of Hell and spends his time brooding and killing lowlifes.

While some of the launch titles for Image have since ended, Spawn is still being published to this day.

Runner Up: Superman #75 (Death of Superman)

Why: This book took the media by storm when it came out. It was all over the news when this hit the comic shelves back in 1992, and everybody and their cousin had to have this book. There were multiple editions made: some bagged copies containing fake Daily Planet newspapers with an article about Superman dying, some with black wristbands and even “platinum editions.” While this book certainly contributed to the eventual comic market crash of the 90s, one other book is the lead suspect…

Why: Long-time X-Men scribe Chris Claremont and co-writer/artist Jim Lee were a red-hot team when they were on Uncanny X-Men. So, in 1991, Marvel launched a brand new X-Men title with a #1 issue that struck comic oil.

However, this book is where some people began looking at comics as investments rather than books. Some bought the issue thinking it would be worth something down the road since it was a first issue. But those same people didn’t understand that books like Action Comics #1 or Amazing Fantasy #15 are valuable because they are rare and in demand. Now, is something that sold eight million-copies “rare”? No. That logic led to the comic market crash of the 90s, forcing some comic shops to close and Marvel to file for bankruptcy.

Side Note: This is another made-up age name by me. We ran out of elements.

Why: Brian K. Vaughn’s original series tells the story of Yorick Brown, the only living male on Earth after every living male-thing on the planet drops dead. Armed with only his wits and his pet monkey, Ampersand, Yorick travels the globe meeting various women and seeking an answer to the big question: what caused every male on the planet to die except him? Vaughn’s writing and artist Pia Guerra’s illustrations made this 60-issue series a standout title.

This gets a spot on the list because it marks the rise of independent books. This, The Authority, 100 Bullets and The Walking Dead led the way.

Why: As popular as Batman is now, “Hush” lifted the Caped Crusader to new heights. It featured Batman going through the gauntlet of his rogue gallery, trying to divine the identity of the mysterious villain named Hush.

With writer Jeph Loeb (Superman) and superstar artist Jim Lee, Batman became the top-selling comic on the market for eight of their twelve issue run. One book ruling the market like that doesn’t happen often anymore. This is a must-read for any Batman fan.

Mark Millar and Steve McNiven’s story of the entire Marvel universe at odds with each other over the Superhuman Registration Act is probably the best line-wide event since Crisis on Infinite Earths. Every single issue of this is amazing.

The effects of this story were felt throughout Marvel and lasted for a few years. It wasn’t just a cheap cash grab like Civil War II or Secret Wars. It was about something and had a lasting impact.

Side Note: I named the current era the Digital Age since a lot of comics now have codes to get digital copies of the books.

Why: Scott Snyder and artist Greg Capullo’s run on the Dark Knight’s solo series is the definitive run of the current era of comics for a few reasons.

First, they were on the book for almost the entirety of the New 52 era of DC. Second, it was consistently one of the top five best-selling comics each month and brought in new readers while introducing new villains like the Court of Owls and Mr. Bloom.

As popular and consistently good as Batman was, one other book made Batman DC’s 1-B title…

Why: If you need to pinpoint where the Digital Age begins, look no further than Justice League #1.

Sure, the previous Post-Crisis era of DC ended with Flashpoint #5 and the tail end of that book takes place in the New 52 universe. However, Justice League #1 is where we dive headfirst into this brand-new iteration of DC Comics. DC’s President and Creative Chief Officer Geoff Johns and Co-Publisher Jim Lee wrote and drew the initial story arc that introduced us to the new version of your favorite heroes. Was it a hot seller? Oh, yes.

It became DC’s flagship title for the New 52 era. If you wanted to know what was going on in the DC Universe, you picked this up. The title still remains one of DC’s top sellers.

So, that concludes our journey through comic history. Think I missed any key issues? Agree with my listings? Let me know in the comment section below!