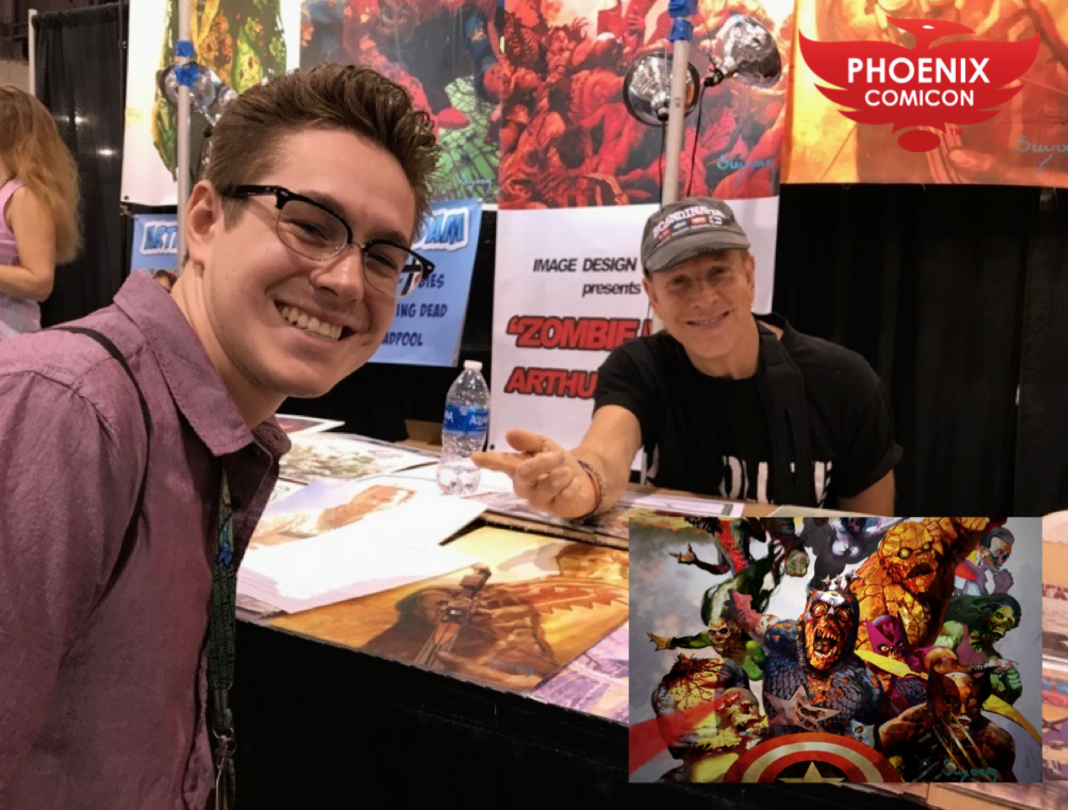 Though Phoenix Comicon 2017 was undeniably dramatic, one man seemed unfazed by the various events, happy to share his life story. Amongst the artists in the bowels of the Phoenix Convention Center was one whose style was not cute, filled with dogs, or by any means a “flavor of the month.” His looming prints towered behind him, compelling onlookers to witness a drooling, decaying overabundance of…..ZOMBIES!

Yet, as he would go on to state, these were no mundane or gray, monochrome zombies; these were the unique, colorful works of the “Zombie King,” Arthur Suydam.

In the presence of zombie royalty, I bowed and politely asked Suydam few questions about zombies, Marvel Comics, and where his style came from. He began by recounting his rich family history, which included more than a few great American artists and even an architect. But of all the Suydams, the youngest — Arthur Suydam — painted zombies. However, it wasn’t always his dream:

“I grew up hating zombies because they really creeped me out. The movies that gave me the worst nightmares when I was a kid were the zombie movies. So, I tried to stay away from watching them because I learned my lesson after watching Night of the Living Dead one time, and I kept having nightmares about it. So that might have something to do with it.”

However, it wasn’t simply fear or trying to conquer a fear that drove Suydam to zombies; his connection was formed from some odd hands-on work during his days in art school:

“I’m not your classically trained. My training is 16th century Dutch and Italian. Based on the notes from Michelangelo, Leonardo Di Vinci, and Raphael, they rebuilt a school about four blocks from my house. It’s called the New York Academy of Figurative Art; that’s where I went to school. It’s very similar to medical school. We had to do autopsies everyday. From nine in the morning till six at night, you had to work with bodies — you had to take them apart. Put them back together again. We had to draw them, we had to sculpt them, and we had to paint them.

So, I did that for two years, and the anatomy — I specialize in anatomy — so the anatomical part just really stuck with me. And it kind of became like crossword puzzles for me. When you study anatomy in that sense, you start to develop awarenesses of things that you didn’t notice before. Like you can really analyze people when they’re walking down the street for fat content, muscle content, body type. All of sudden you get this encyclopedia in your head of body types and then you can’t get rid of it. So, once it’s there, it’s something that you learn, and you can’t unlearn.”

At this point, I was tempted to ask Suydam what he could tell about my body from a glance, but thankfully, before I could, he continued to cite two more personal connections to zombies:

For Suydam and his art, painting zombies comes from a somewhat unorthodox mix of what he loves and the schooling he will never forget. However, zombies weren’t always such interesting creatures in Suydam’s opinion.

“The people making the movies, their go-to is just to try to gross people out, scare people, gross them out. And I thought that was what was wrong with the genre.”

Naturally, this gave Suydam a different take on them.

“So, I look at zombies as a challenge for how to fix them. I remember I had all those zombie movies I didn’t watch. They were all terrible, and I thought they were kind of disgusting. And I said, ‘Okay, now if I was gonna fix zombies, what would I do to fix them?’ So, what I decided to do was I said, ‘Okay, first thing I’m gonna do is troubleshoot them.’

“I thought one of the problems zombies had was they all looked the same. Basically, you strip them down to a skull, and all skulls look the same. You can’t tell the difference between one and another. So I said, ‘We’re gonna make each zombie an independent character with clear characteristics and a clear, different look than the one standing next to them.”

He went on to cite the game-changing Marvel Zombies to support his perspective.

“With Marvel Zombies, Wolverine was the guy who liked escargot, so he liked eyeballs. That’s all he liked, so he was the eyeball guy. Cyclops, we made like the headless horseman where he took his head off, and he was carrying his head around. Captain America took the top off his head, and we set it up so when he fell asleep birds crawled in his head and set up a nest there. So, he has a nest of birds inside his head, and he doesn’t know they’re there; he’s unaware. So, I did that with all the different characters.”

However, in troubleshooting, it was not just a lack of personality Suydam took issue with.

“Zombies were always kind of gray and disgusting: the color of a potato with some blood thrown in. I thought that was horrible. It doesn’t appeal to me, so I said, ‘What I’m gonna do is I’m gonna take a French impressionistic palette and make them really colorful.’ So, if you look at them, it looks like a children’s book, coloring book.”

Yet even with personality and color, Suydam still saw room for improvement.

“The third thing was make them funny. So, try to put some humor in every picture. And I thought, ‘If we do those three things, we can dissolve the problems of zombies.'”

With that, Suydam made zombies stronger, intriguing characters suited to be used by Marvel for the inevitable Marvel Zombies. However, Suydam wasn’t always a Marvel fan. However, once he started reading their books, he found them to be much better than the “distinguised competition.”

“I started off — when I was really young — reading DC comic books, but once I found Marvel comic books, I liked them much better because they had these great soap-operas attached. You know, this guy is in love with this girl, but he doesn’t want his family to find out. All these soap-operas. That was missing in the DC Universe. DC was more — I would call it — sci-fi aimed at six-year-olds, seven year-olds, eight year-olds; it’s just some guy in a red suit flying around. Marvel was like these guys had to have a history, struggles in their personal lives that had nothing to do with when they put on their uniform.”

Naturally, because Suydam became such a fan of Marvel Comics, he thought their marriage with zombies would be perfect; however, Suydam concluded our interview by mentioning that the idea was something needed in the world of comics, something to break the mold.

“So, when Marvel Zombies came around, I thought because it was fresh and if nobody was looking, paying too much attention to what we were doing, we could sneak this one under the wire, and it would be really great and would be really popular because that’s what people want: people don’t want to see the same old story over and over and over.”

Instead of the classic ‘hero fights and beats bad guy or girl’ story we have seen time and time again, Marvel Zombies took our beloved heroes and villains and distorted them, forcing us to see them and their zombified forms from a newer, bloodier perspective. It was, as mentioned, bold and fresh, unlike anything Marvel was publishing at the time.

From the success prophesied by Suydam, Marvel Zombies has inspired 4 sequels, a one-shot graphic novel, a crossover with Dynamite Entertainment and everyone’s favorite chainsaw wielding, boomstick-carrying hero, Ash Williams — hail to the king, baby — a tie-in during the Secret Wars event, and even a Secret Wars mini-series.

If you haven’t had the chance, pick up the original Marvel Zombies at your local comic shop or online. Even if it’s not your thing, I can guarantee you’ll love Arthur Suydam’s art.

Also, keep checking back with The Source for updates on all your favorite superheroes, comics, shows, and movies!